I am so proud of the All Blacks win but full marks to France who played out of their skins and made it a real Rugby World Cup final of old style rugby. 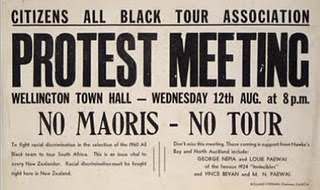 I watched the 1956 Springboks play New Zealand at Carisbrook and the British Lions play New Zealand in 1959 on the same ground when Don Clarke kicked 6 penalties to give NZ an 18-17 win. But it was the All Blacks tour of South Africa that left the greatest impression on me. Why? Because there were no Maoris in the team.

It was a cold, crisp winter's morning at Montecillo Ground, Dunedin, in mid-July 1960. A heavy frost covered the ground. I was playing for Zingari Richmond under 7 stone schoolboys and as I pushed my way through the opposition, I hit a wall of players and fell to the ground, landing arkwardly. The pain was excruciating as I writhed on the ground. I broke my collarbone.


I was in considerable pain for three months as I walked and bused between the Dunedin hospital, physiotherapy department and doctors. It had just been announced that an all white All Black rugby team would tour South Africa. It was a bombshell to a young rugby player who had watched Waka Nathan, Mac Heriwini, Phillip Tautarangi, Ron Rangi and other Maori All Black hopefuls play Otago at Carisbrook a few weeks earlier. These guys ran like quicksilver, and cut through teams like swords. Legends such as Manga Emery, Alby Pryor, Muru Walters, the Maniapoto brothers and other were also not going to be given;the chance to wear the All Black jersey either in 1960. I was grestfallen and confused.

I pleaded to my Father and shopkeepers I knew in central Dunedin whose shops I walked past on my way to the hospital. Their shop windows had posters of the touring All Black team, but without Maori. I asked respected shop owners who had played rugby and cricket such as Charlie Saxton, Vin Cusack, Walter Findlay and even Bert Sutcliffe, why there were no Maoris in the All Black team. They had similar answers, " That is what the South Africans want,"

As a 12 year old I felt there was no justice in this world, yet on ANZAC day, we were told the Maori and Pakeha had fought side by side.

Well they weren't going to be playing side by side in the 1960 tour of South Africa.

So as we celebrate today's victory of the All Blacks where over 50% are Polynesian, let's remeber thoses NZer of Polynesian descent who were barred from touring South Africa in 1960 - Waka Nathan, Mac Heriwini, Phillip Tautarangi, Ron Rangi, Manga Emery, Alby Pryor, Muru Walters, the Maniapoto brothers and many more who should have been in that 1960 team. 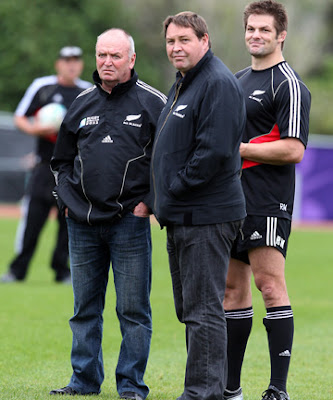 The best tribute to coach Graham Henry is from the 1987 RWC captain David Kirk. , I moved to Auckland from Otago in 1985. My first coach at the Auckland University Rugby Club was Graham Henry.

Ted, as he was then, and is now to all his players, was a well-established and successful club coach. A month or two into the season I had a problem. I needed to travel out of Auckland at the weekend to resolve some personal (ie girlfriend) issues.

I broke the news to Ted at training that I would not be available for selection that weekend. His response to me was blunt: "Well you're no bloody good to me then, are you? Bugger off and muck around over there."

I didn't really mind, I was getting my weekend off after all, but I did think the response was a bit uncaring.

That was Ted then and so it remained for many years after. Through most of his coaching career he has been driven, blunt, not quite surly, but not far off. He is now nothing like that and, at least in part, a great All Black team is his and our reward.

Ted tells the story against himself that earlier in his All Black coaching career he gave one of his typically detailed and definitive team talks before a match. He made it clear to players what was expected of them, what was required and what they would be judged on.

After the team talk, it is not clear exactly when, but let us assume not on the way to the bus and the ground, but at some later time, his captain, Tana Umaga, came up to Ted and asked him a question. He said,

"Why do you give all those team talks?"
Ted replied something to the effect,

"To prepare the team. To make sure everyone is focused on what we have to do."

Tana burst his bubble with his reply, "No one listens to them you know. They are a waste of time. I reckon you should just stop."

Ted doesn't say if he did stop completely but I am sure he took the advice on board and adjusted his style and approach. It is fashionable to say that Generation Y or Generation Z, or whatever letter-label we use today, are different, that they can't be treated the same as earlier generations, that motivating them is more difficult.

I edited the World magazine's recent rugby edition and ran a feature on the showdown between Robbie Deans and Graham Henry.

Sybille Hetet, the wonderful photo editor at Fairfax magazines, dug out a whole lot of photos of the two coaches. As we were poring through them, selecting the ones we would use in the magazine, Sybille said to me: "You know what I really notice in these photos of Graham Henry? How close he is to his players. Here's one with a player with his arm around him, here's another in which he is ruffling a player's hair and another where the players are picking him up."

It was true. Through the photos it was obvious that the players had great affection for their coach and he for them. This was something much more than the stand-offish respect and good-natured camaraderie of team and coach, this was a deeper connection.

Graham Henry, and it has to be said his assistant coaches, have built a truly great All Black team and they have developed courageous, thoughtful and caring men. This could not have been done by the Ted I knew in 1985. But it has been done by the Ted of the last few years and of 2011.

I salute Ted, the man who has prepared his team to be the best in the world and set them free to do it. I bet that somewhere in the motivation of every All Black that runs out tonight will be a part reserved for their coach.

This team wants to win the World Cup for themselves and for the country, but they also desperately want to do it for Ted. And that is a testament to the man, not the coach, and the greatest gift his players can give him.

In our busy life, newspapers are most important source of information.
There were also interesting garden "flowers", made from tin cut into petal
shapes, bolted together on an aluminum rod, with bottle caps as the center.
This is where the online websites play quite a vital role.
As of now, I can only speculate that there are more good than
bad to go on-line for the newspaper publishers in Malaysia as apparently there has been no case where a
newspaper publisher has gone bust. In advance of purchasing, you should also review if the
reproduction Hermes totes are priced way too high compared to it
really is top quality and also product difference.

Apply 2 to 3 inches of mulch over the plants root system once
all foliage is removed and discarded. Owning a regular lawn mower does
not mean you have to give up on mulching your yard; you just have to be willing to
do some work. When ordering mulch, find out what the delivery cost is and compare it between
companies before ordering.

Hey, I think your blog might be having browser compatibility issues.
When I look at your blog in Opera, it looks fine but when
opening in Internet Explorer, it has some overlapping.
I just wanted to give you a quick heads up! Other then
that, wonderful blog!

Every student has the chance of enjoying our affordable custom dissertation help. The writers hired at the company are legitimate paper writing services writers with significant experience.