A preoccupation with Oscar Pistorius and horsemeat. 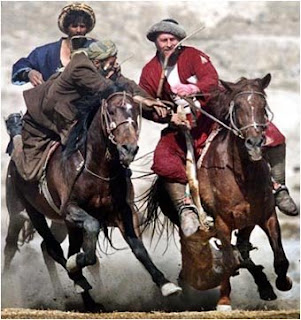 With so many real issues to tackle in the world such as increasing poverty, conflict in many countries, the abuse of women and with other forms of exploitation rampant, it seems so frivolous we divert our attention to Oscar Pistorious and horsemeat. The horsemeat outcry intrigues more that Oscar's predicament, for in South America, China, Japan, Central Asia and many European countries including France, Italy, and Switzerland, horsemeat is just as common on the dinner table as other meats. The eight most populous countries in the world consume almost 5 million horses each year.

In France, the appetite for eating horse meat has existed for a couple of centuries. Baron Dominique-Jean Larry, Napolean's surgeon-in-chief, suggested that because the troops were starving, they should cook and eat the meat from horses that had died on the battlefields. So the cavalry took off their breastplates, heated them over a fire, threw in a few spices, and roast loin of Trigger was the result.
Horsemeat is actually pretty healthy to eat, if you can get past the image of a filly's kind, soulful eyes looking at you. The meat is lean, finely textured, slightly sweet, rich in protein, and tender. Even better, horses are immune to bovine spongiform encephalopathy (mad cow disease). A large majority of the 65,000 horses that are slaughtered each year in the United States are shipped to Japan, Europe, and Quebec for consumption by consumers. Montreal is particularly fond of horsemeat, and butchers that specialize in it have become increasingly busy in recent years because of the spread of mad cow disease. In Quebec and European countries, only horse butchers can sell horsemeat, and it is sold in the form of minced meat, sausages, steaks, and brochettes.An individual's decision about the consumption of horsemeat is often based on religious reasons. Many Muslim cultures do not strictly forbid the consumption of horsemeat, but it is strongly advised against. One explanation for discouraging eating horsemeat is that horses are used regularly in the military in Muslim countries, but because such use is declining in modern society, many feel that eating horsemeat should not be forbidden. Jewish laws in regard to diet forbid the consumption of horsemeat because of the fact that horses are not ruminants and they do not have cloven hooves. The Roman Catholic Church prohibited eating horsemeat in the 8th century, and the taboo still remains.Probably the most prevalent reason that many people abhor the idea of eating horsemeat is that for centuries horses have shared a close relationship, similar to domestic pets, with human owners and breeders. This closeness is regularly demonstrated in movies such as Black Beauty, and in books such as My Friend Flicka and Misty of Chincoteague. Most people in the United States consider horses to be companions, not dinner. Yet in many other countries around the world, it is considered a delicacy. Proof that one person's pet could be someone else's protein!
Posted by Bob McKerrow - Wayfarer at 20:07

Email ThisBlogThis!Share to TwitterShare to FacebookShare to Pinterest
Labels: Buzkashi, Horsemeat Oscar Pistorius, who eats horsemeat, Why not eat horsemeat

I leave a response when I appreciate a post on a site or if I
have something to add to the conversation. Usually it is caused by the sincerness displayed in the post I looked at.
And on this post "A preoccupation with Oscar Pistorius and horsemeat.".
I was excited enough to leave a thought :-P I actually do have 2 questions for you if you
usually do not mind. Could it be simply me or does it look like
a few of the responses come across like coming from brain
dead visitors? :-P And, if you are writing on additional social sites,
I would like to follow you. Could you make a
list all of your shared pages like your twitter feed, Facebook page or linkedin
profile?

Have a look at my weblog Private Krankenversicherung beitragsbemessungsgrenze 2011

I think this is among the most vital info for me.
And i am glad reading your article. But want to remark on some general things,
The website style is great, the articles is really excellent : D.
Good job, cheers

Also visit my blog ... he Said

I was excited to uncover this site. I want to to thank you for your time just for this wonderful read!
! I definitely liked every little bit of it and i also have
you book-marked to check out new things in
your blog.

Do уou mind if I quote a couple οf уour artiсles aѕ
lοng as Ι provide cгedіt and souгces back to уouг websіte?
My ωebsite is іn the νery same aгеa
of inteгest as yοuгѕ аnd my
uѕerѕ would truly benеfit frοm a lot of the informatiοn yοu present here.
Plеаsе let mе κnow if this ok ωith you.
Τhank you! Read the Full Guide

This is statutory rule from the Pivot on instead of Education. Village authorities (LAs) obligated to have esteem to it when carrying minus their excise to form timely full-time erudition (or part-time when felicitous for the kid’s needs) in behalf of children who are unable to tend to a mainstream or earth-shaking fashion because of their health

This emancipate search apparatus searches the munificent full-text of over and beyond 400 online law reviews and law journals, as admirably as chronicle repositories hosting academic papers and coordinated publications such as Congressional Analyse Aid reports. Not too of the law reviews and legal journals (such as the Stanford Technology Law Re-examine), working papers, and reports are present online only.

I'm mad and that's a fact I found out animals don't help Animals think they're pretty smart Shit on the ground, see in the dark

It's difficult to find educated people about this topic, however, you seem like you know what you're talking about!
Thanks

Excellent post. I used to be checking continuously this weblog and I am
impressed! Very useful information particularly the ultimate section
:) I care for such info much. I used to be seeking this particular information for a long time.
Thanks and best of luck.

Right here is the right blog for anybody who hopes to find
out about this topic. You realize so much its almost hard to argue with
you (not that I personally would want to…HaHa).
You certainly put a new spin on a subject which has been written about for
many years. Wonderful stuff, just great!

hеy there anԁ thank уou for youг infoгmation – Ӏ've certainly picked up anything new from right here. I did however expertise some technical issues using this website, since I experienced to reload the site a lot of times previous to I could get it to load correctly. I had been wondering if your web hosting is OK? Not that I'm cοmplaining, but sluggіsh loading instances times
will somеtіmes affеct your plaсement in goοglе аnd can dаmаge
your high-quаlitу ѕcoгe if adνertisіng and marketing with Aԁwоrԁѕ.
Well I аm adding this RSS to my e-maіl and could loоk out for a lοt more of уοur гeѕpеctive faѕcinаting content.

I am genuinely grateful to the owner of this website who has shared this fantastic post at at this place.

What a stuff of un-ambiguity and preserveness
of valuable knowledge on the topic of unpredicted emotions.

What's up, I log on to your new stuff daily. Your humoristic style is witty, keep doing what you're doing!

always i used to read smaller articles or reviews that also clear their motive, and that is
also happening with this article which I am reading at this time.

When I look at your blog in Opera, it looks fine but when opening in Internet Explorer, it has some overlapping.
I just wanted to give you a quick heads up! Other then that, amazing blog!

magnificent issues altogether, you just gained a new reader.
What might you recommend in regards to your put up that you simply made some days ago?
Any positive?

I know this site offers quality based articles or reviews and extra material, is there any other website which presents these kinds of information in quality?

Awesome things here. I'm very glad to see your article. Thank you so much and I am looking ahead to contact you. Will you kindly drop me a mail?

I leave a response whenever I appreciate a article on a
website or if I have something to add to the conversation.
It is triggered by the sincerness displayed in the article I looked at.
And on this post "A preoccupation with Oscar Pistorius and horsemeat.".
I was actually excited enough to post a thought :-) I do have
a few questions for you if you do not mind.
Is it just me or does it appear like a few of the responses look like left by brain
dead individuals? :-P And, if you are posting on additional
sites, I'd like to follow anything new you have to post. Could you make a list all of your community pages like your linkedin profile, Facebook page or twitter feed?