Christchurch two years on after the earthquake 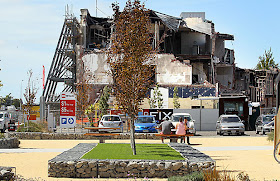 SIGNS OF LIFE: The garden outside the Epic IT hub brings fresh life to the street corner beside the quake-ravaged McKenzie & Willis.
A tear-stained Christchurch is nearly through the ''worst of it'', Prime Minister John Key has told residents while marking the second anniversary of the February 22 quake.
A series of events are being held around Christchurch today to mark the terrible destruction brought by the quake and to remember the 185 people killed.
More than 500 people gathered at Latimer Square for the main memorial service at midday, where Key and mayor Bob Parker gave speeches.
Key urged Cantabrians to ''persevere'' and ''stay strong''.
"In the past two years, I would bet more tears have been shed in this city than in the rest of the country put together," said Key.
"We're just about through the worst of it. Better times are ahead as we rebuild a city that we can all be proud of."
Key said the Government was "absolutely committed" to the rebuild and hoped people could remain patient.
"I know it's hard, I know there's still suffering, and everyone is anxious for things to go faster, but this job is unprecedented in the world, and we should judge ourselves by how we have come so far."
He paid tribute to those who lost loved ones in the quake.
"Your grief is still raw, and only time can help numb the pain of your loss."
Parker said the rebuild needed to produce a city that honoured the losses of the past two years. "As much as we say we will look forward ... we have to acknowledge that the  terrible events that took place here have caused a deep pain, a deep sense of loss that will be with us forever."
Two years on from Christchurch's disastrous earthquake and the recovery is about two things: the rebuild zone and the little guy.
The two reflect the old and the new, the commercial and the residential, the big picture and the people, and highlight just how much work is still to be done.
Progress in Christchurch's earthquake recovery is steady, but it is slow.
See our interactive graphic of progress by the numbers below.
Christchurch two years on
Less than a quarter of the worst-damaged homes have been repaired or rebuilt; the rate for lesser-damaged properties is about a third.
Thousands of condemned houses are still to be torn down.
Crucially, some residents have not received any money, and still do not know when their homes will be fixed.
The "rebuild zone" is a new phrase, introduced by Earthquake Recovery Minister Gerry Brownlee last week in a well-timed piece of spin.
It may yet help Cantabrians move on that little bit more, and lead them to believe Christchurch is on the mend, but the numbers in the rebuild zone speak for themselves.
More than 900 central-city buildings have been demolished but there are many still to go to make room for projects like the convention centre and the green "frames". The exact number is unknown.
Three hundred and twenty-five commercial consents and 77 residential consents have been granted in the central city in the last two years, but only a handful of construction jobs are under way.
The "rebuild zone" is the symbolic and literal heart of the quake recovery but will only register a pulse when more actual rebuilds are under way.
Yes, the economy is healthy. Canterbury's economic activity was 7.5 per cent higher in 2012 than 2011, more than twice the growth of any other region.
But on the ground, some people are still struggling. 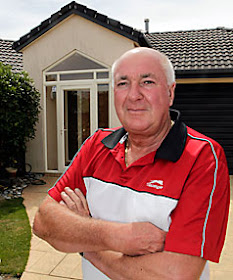 The case of people like Greg Mitchell ( left) is well known. You may not know him by name, but you have probably heard a story like his before.
His insurer has told him his house is so badly damaged it must be rebuilt, but he still hasn't been paid by the Earthquake Commission (EQC).
Until he is, nothing can happen.
Mitchell has filed three damage claims, and EQC has to determine what damage happened when.
If it finds no single event caused more than its liability cap of $100,000 damage, things will get even more complicated.
"It is [frustrating]," he says.
"You're not getting any further and you think 'why do I bloody bother?' I'll just sit back and in due time I'll get it I suppose. I could ring up again today and it'll just be no different from last time and there won't be a cheque in the mail."
Mitchell and wife Pauline are able to live in their cracked Brookhaven house, but there is resignation in his voice when he talks about two years of insurance inertia.
"You ask about your entitlement ... and you don't get any more answers. You ring up and you ring up. I don't know what happens. You just wait. What else do you do?'
EQC has devoted considerable resources to apportionment, and aims to have all 7500 remaining cases sorted by May.
Today's Press holds a bevy of other numbers denoting progress - claims settled, buildings demolished, roads repaired.EQC has devoted considerable resources to apportionment, and aims to have all 7500 remaining cases sorted by May.


By definition, they also highlight what hasn't happened.
For quake-hit residents, there are two key categories here: those with damage up to $100,000 who are in a managed-repair scheme or planning to oversee things themselves, and those hardest hit, with damage over $100,000, so bad that their insurance company is paying for their homes to be repaired or rebuilt.
Take the first group. There are about 84,500 properties with up to $100,000 damage.
The commission has overseen and finished repairs on 32,000 of them. That's less than 40 per cent, and the hardest part is yet to come.
EQC, for good reason, prioritised easier jobs, often in the lesser-damaged west of the city where work could be completed more efficiently.
Many harder, costlier jobs have not been done, but the commission is aiming to have all repairs over $50,000 finished by the end of the year and is prioritising vulnerable people.
Then there are the worst-damaged cases. About 18,500 properties copped more that $100,000 damage in the quakes.
Insurers guess up to a third of those will have to be rebuilt and have already paid $2 billion in settlements.
However, just 400 homes have been repaired or rebuilt to date, with another 650 new home builds and 500 major repairs due in the next six months.
Peter Rose, chief executive of Southern Response, the AMI claims management company, says progress isn't good enough.
"I'm not happy, insurance-wise. We've still only got 72 per cent of our customers having made their settlement decision [and] we're dissatisfied with the number of builds we've completed and have under construction."
Rose is loath to criticise other insurers, but sees similarities in their positions.
"What we see is stats that they ... present and we all seem to be broadly in the same position right now.
"From our viewpoint it is not [satisfactory]."
Things will get better now the groundwork has been done, he says, but challenges remain in ensuring there is enough labour in the construction sector and adequate resources for insurers' major repairs programmes.
Commercial insurance claims have progressed better, with $4.7b paid out, but there are precious few new builds underway by comparison.
RUSHED DECISIONS DON'T ENDURE - BROWNLEE
Brownlee is "satisfied" with progress so far, but not happy.
"You always want things to be going at a much faster pace," he says.
"I think the general focus now has switched very much into what we can achieve in the future and the concern about the immediate situation and lament for the past appears to be subsiding a little bit.
"I think the big thing that Canterbury needs is to celebrate some of the successes we've had. There are some good things that come out of bad and I think far more good than bad in this case. I think focus on the hard work that a lot of those people [working on the recovery] are doing would be a good thing.
He knows who and what he wants to see improve, but is keeping it to himself for now.
""You've got to give people who have a responsibility...time to sort it out."
Despite some peoples' frustrations about progress, he makes no apology for the speed of decision-making.
"One thing that has become evident over the last two years is that rushed decisions don't endure. You'll always get people who stamp their feet and say 'make up your mind and get on with it'."
Fair enough. Impatience is not a barometer for lack of progress, but public opinion cannot be ignored.
The results of a well-being survey released this week showed three-quarters of people in greater Christchurch are happy with their lot, but more than half (54 per cent) said their quality of life had fallen since the quakes.
Seven per cent rated their overall quality of life poor or extremely poor.
If Christchurch is on the path to rebuild and recovery, by February 22, 2014, those last two figures must fall.
And hopefully Greg Mitchell, and those like him, will on the road to putting the quake behind them.