Reflections from a Tapchan. Journey on the silk route 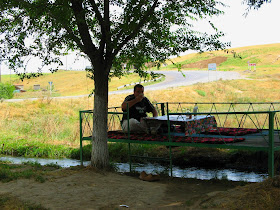 And there in front of me was something I had never seen on the silk route in over 30 years, a large *tapchan straddling a stream. Photo Bob McKerrow

After our journey to to Otrar and Turkestan we spent a pleasant night in Shymkent (Chimkent) and the next day looked around this strategic silk route town. Not much of the pre-Soviet period here.

Panjab ( Five Rivers) Fariab, Doab, Surjab Murgab etc. they generally are towns situated on rivers or lakeshores. Also the Kazakh word ‘su’ for water also helps ones vocabulary as rivers and towns such as Ak Su.

Back to the journey home. As we were coming down a hill side 45 minutes east of Shymkent, and just after Ak Su, I saw an idyllic spot that surely must have been a stop for travelers by horse, camel or whatever means they travelled in ancient times. There was a stream, trees and from the spot, you could see from where you had come and where you were going. And, hey presto ! There was a Chai Khana behind the trees.
We parked at the road side and walked down the stream to the Chai Khana. The name of the tea shop was written in Russian, and I could recognise the last two letters – ab.
Translated into English it was called Masab. Suin spoke to the waitress who said it meant water or stream by the undulations. It sounded OK to me as we had been travelling over an undulating road and had just dropped into a depression with a stream.

In Victor Frankl’s book about concentration camps, he talks about the excitement when they moved by train from one camp to another and how inmates looked through cracks to search of recognizable features that would give a clue for life or death tomorrow.

I am now back in Almaty relaxing, reading and travelling by trolley buses and trams with my nephew Dimash
and son Ablai. This is a great city.

* The tapchan is a raised platform that is used in Central Asia for relaxing and reclining outdoors. It functions as a table, or as a bed, and often has a smaller table on it for serving food and tea. The tapchan can be made of wood or welded steel, and often has a thin mattress, cushion, or carpet on wood planks. You will find them in parks, restaurants, back yards, and at hotels. For more....