This discovery fascinated me as I worked with tribal people in Vietnam for the Red Cross in 1971 and again in 1973-74 for another year. Can you believe this story? 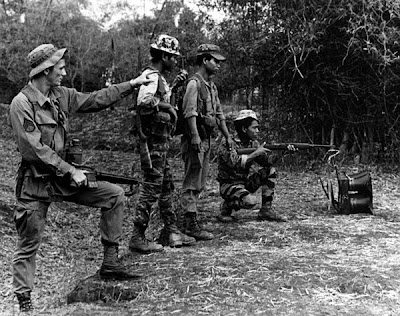 A man and his son that have been missing since the Vietnam War were found living in a forest. (Photo : Wiki Commons)

An 82-year-old man and his 41-year-old son were found living in a Vietnamese forest after they escaped their war-torn hometown, Sowetan reported.
Dan Tri Newspaper reported that in 1973, Ho Van Thanh grabbed his then-infant son and ran into the forest after a bomb went off that destroyed their home and killed his wife and two other children. They had not been since. Van Thanh, the father, can partially
Ho Van Thanh, the father, can partially speak in the Cor minority language while his son, Ho Van Lang, can only speak a few words, according to an official at Tay Tra commune in Quang Ngai province.
Two people reported to authorities on Wednesday that they'd witnessed individuals with odd mannerisms traveling around the mountainous region. Police officials investigated the area and eventually found the duo, recognizing their alleged behavior and observed that Ho Van Thanh looked sickly.
Since they escaped into the woods, both the father and son have reportedly had no contact with the outside world. They survived by crafting their own tools left from war debris and made clothing out of tree bark. In order to stay protected from wild animals, they built a tent in a tree.
"They still feel frightened despite being taken to an isolated area. People who just come to stare at them bothered them the most," Le Van Vuong, Vice Chairman of Tra Xinh Commune, said. "They do not know how to speak the Kinh people's language. They just know a few words of Cor ethnic minority people's language and use body language to express themselves."
Local authorities are concerned that both Ho Van Thanh and Ho Van Lang may run away, so they're being monitored by officials near their old home that they were brought back to.
The Vietnam War lasted from 1955 to 1975 and caused tens and hundreds of thousands of civilian casualties in North and South Vietnam.
Posted by Bob McKerrow - Wayfarer at 20:44

Top 7 packers and movers Gurgaon was suggested by a buddy who had an excellent encounter with yourselves; our shift was fantastically managed by your employees, very effective & diligent. Value the cash, stored a lot of stress & we will also be suggesting you