The puzzling way that writing heals the body.


I started working for the Red Cross during the Vietnam war  in 1971 and have seen incredible amounts of extreme suffering. Forty-five years later (late 2016) I was still working for the Red Cross, this time in Bangladesh after major flooding and a cyclone. Having seen so much trauma  and been in the thick of death, injury, exploitation and destruction, the constant exposure to the suffering of people in war and natural disasters took its toll on my mind and body. What I discovered early on in my Red Cross career is how writing a diary about the horrific things I had seen, somehow eased the pain. I have kept diaries for over 40 years and they proved incredibly therapeutic for relieving tension, stress, pain and hurt. I would always pick an inspiring place to write my diary and found it had an amazing healing effect. Today I found this article on the BBC website written by Claudia Hammond which somehow coincided and explained a technique I had been using for over 40 years. Have a read of it. It may be helpful.

In 1986 the psychology professor James Pennebaker discovered something extraordinary, something which would inspire a generation of researchers to conduct several hundred studies. He asked students to spend 15 minutes writing about the biggest trauma of their lives or, if they hadn’t experienced a trauma, their most difficult time.
They were told to let go and to include their deepest thoughts, even if they had never shared these thoughts before. Four days running they did the same thing. It wasn’t easy. Pennebaker told me that roughly one in 20 students would end up crying, but when asked whether they wanted to continue they always did. Meanwhile a control group spent the same number of sessions writing a description of something neutral such a tree or their dorm room.

Studies have shown expressive writing can reduce the amount of times people visit the doctor (Credit: iStock)
Then he waited for six months while monitoring how often the students visited the health centre. The day he saw the results, he left the lab, walked to his friend who was waiting for him in a car and told him he’d found something big. Remarkably, the students who had written about their secret feelings had made significantly fewer trips to the doctor in the subsequent months.
Ever since, the field psychoneuroimmunology has been exploring the link between what’s now known as expressive writing, and the functioning of the immune system. The studies that followed examined the effect of expressive writing on everything from asthma and arthritis to breast cancer and migraines. In a small study conducted in Kansas, for example, it was found that women with breast cancer experienced fewer troublesome symptoms and went for fewer cancer-related appointments in the months after doing expressive writing.

The aim of the study wasn’t to look at long-term cancer prognosis, and the authors are not suggesting the cancer would be affected. But in the short-term other aspects of the women’s health did seem better than for those in the control group who wrote about the facts surrounding their cancer rather than their feelings about it.
But it doesn’t always work. A meta-analysis by Joanne Fratarolli from the University of California Riverside does demonstrate an effect overall, but a small one. Nevertheless, for an intervention that is free and beneficial, that’s a benefit worth having. Some studies have had disappointing results, but there is one area where the findings are more consistent and that is in the healing of wounds.
In these studies brave volunteers typically do some expressive writing, then some days later they are given a local anaesthetic and then a punch biopsy at the top of their inner arm. The wound is typically 4mm across and heals within a couple of weeks. This healing is monitored and again and again, and it happens faster if people have spent time beforehand writing down their secret thoughts.

Simply imagining a traumatic event and writing a story about it could have health benefits (Credit: iStock)
What does the act of committing words to paper do? Initially it was assumed this simply happened through catharsis, that people felt better because they’d let out their pent-up feelings. But then Pennebaker began looking in detail at the language people used in their writing.
He found that the types of words people used changed over the course of the four sessions. Those whose wounds healed the fastest began by using the word “I” a lot, but in later sessions moved on to saying “he” or “she” more often, suggesting they were looking at the event from other perspectives. They also used words like “because”, implying they were making sense of the events and putting them into a narrative. So Pennebaker believes that the simple act of labelling your feelings and putting them into a story is somehow affecting the immune system.
But there is a curious finding which suggests something else might be going on. Simply imagining a traumatic event and writing a story about it also makes wounds heal faster, so perhaps it’s less to do with resolving past issues and more to do with finding a way of regulating your own emotions that makes a difference.

After the first day of writing most people say that churning up the past has made them feel worse. Does the stress cause people to release stress hormones such as cortisol, which are beneficial in the short-term and could enhance the immune system? Or is it the improvement in mood after several days of writing that brings the benefits for immunity? So far, no one knows.
Whatever the mechanism, despite several decades of research showing it works, it’s rarely used clinically. You could imagine a situation where people booked in for surgery are given expressive writing instructions in the preceding weeks, but very few studies have used clinical populations with real, surgical wounds, rather than giving healthy students artificially-induced wounds. Also, it works better for some people than others, all depending on how well they engage with the process. What’s more, the effect is short-lived, so you’d have to get the timing just right. Writing about your feelings doesn’t boost your immune system for life. If the same people are wounded again a few months after an initial study, they don’t heal any faster than anyone else.

The writing could work after you're wounded - such as when you're healing after surgery (Credit: iStock)
But now new research from New Zealand suggests it’s not essential to do the writing before you are wounded. It can work just as well if you do the writing afterwards. This opens up the possibility of using expressive writing not just when surgery is planned, but for real-life injuries which of course we can’t predict. Kavita Vedhara from the University of Nottingham and her team in New Zealand took 120 healthy volunteers, and made them write about either a distressing event or how they spent the previous day. They did this either before or after a punch biopsy on their upper arm. The people from the expressive writing group were six times more likely to have a wound that had healed within 10 days than the people in the control group.
We’d need to have more studies conducted with real life patients, but maybe one day when we’ve had an operation, we might be told to go home with instructions on expressive writing. As Kavita Vedhara told me in the BBC’s Health Check, the effect is “short-lived, but powerful”.
Posted by Bob McKerrow - Wayfarer at 21:56 No comments: Links to this post

Quality bookshops are becoming rare these days in New Zealand,  I was pleasantly surprised to discover Piccadilly Bookshop in the Avonhead Mall Christchurch yesterday.  They have an extensive range of New Zealand books and many titles on mountaineering, exploration, regional and natural history.  They also have quite an impressive range of books from all over the world. See their website. 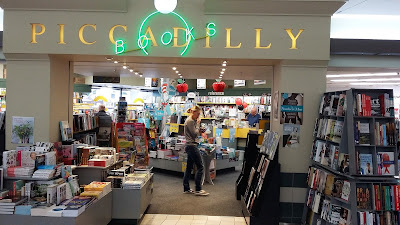 Exuding a relaxing atmosphere, it is easy to get lost for an hour or more, just browsing. I met Neville Templeton, the owner, who comes across as a man who knows books.
With links to all major Publishers and Distributors in New Zealand / Australia and with a ready access to local authors and self publishers, they aim to give you the best of choice in national and international reading. Piccadilly Bookshop search literary publications for titles that fly under the radar, and say they will search to find that book that you cannot locate elsewhere. 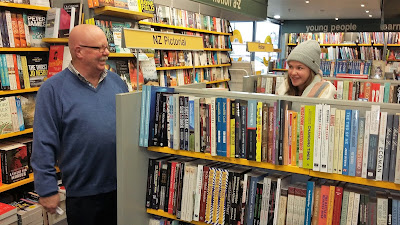 Neville Templeton the owner of the Piccadilly Bookshop talks to a customer. Photos: Bob McKerrow
Posted by Bob McKerrow - Wayfarer at 20:07 2 comments: Links to this post