The grave digger of Kabul. 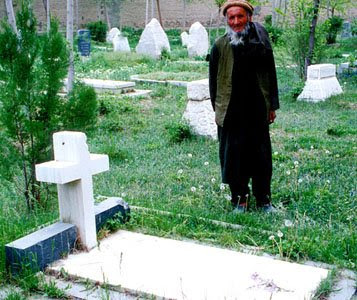 Rahimullah, the grave digger of Kabul

It was a cold winter’s day in early 1994 when I first met Rahimullah, grave digger and caretaker of the British Cemetery in Kabul. He looked poor in tattered Shalwah Kamez and a shawl wrapped round his shoulders to keep out the biting cold. The headstones and graves were dusted with snow. In the distance the Hindu Kush range stood high above Koh Daman, the hills that skirt Kabul. Rahimullah looked about 50 then. Since the Soviets withdrew from Kabul in 1989 he hadn’t been paid. I knew that Aurel Stein, the famous Hungarian born British Archaeologist was buried here in 1943. I didn’t know that this would to prove to be the most interesting grave yard I had ever seen. Its oldest residents are British soldiers from the Anglo-Afghan wars. Like the 29 members of the 67th Foot (South Hampshire Regiment), buried in a mass grave after a failed attempt to climb a hill south of Kabul on the 13th December 1879. 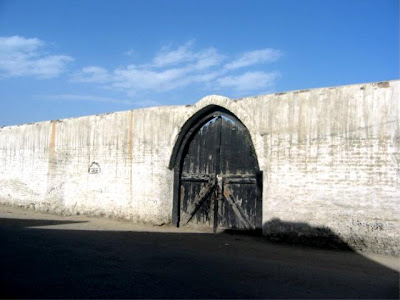 All that really remains of them is part of their grave stone, stuck along one side of the cemetery wall with other fragments of history. Long lists that tell no stories other than the staccato military details of name, rank, regiment and date. In between are assorted ranks of other visitors who never made it home. Explorers, journalists, hippies who lost the trail, engineers and aid workers; Italians and Germans and Canadians and Polish and many from other countries. Their headstones tell a snippet of Afghanistan’s rich history. 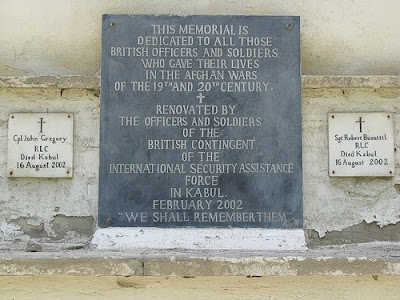 Raimullah hadn’t been paid for four years when I first met him and I was so impressed that he still kept the grave yard tidy after 3 years of heavy fighting that I got a few friends together and we paid him a monthly salary for the next few years. He knew every grave and the history behind it and over a period of almost 3 years, we became good friends. I often used to sit on a grave and he would tell me about his life, his thoughts on Islam, why he tended the graves of Infidels.

I had almost forgotten about old Rahimullah, when I saw the tragic news on the BBC news on Monday night, 27 October about Gayle Williams, 34, who worked with disabled children for the charity Serve Afghanistan, was gunned down by two men on a motorbike as she made her way to work on Oct 20. 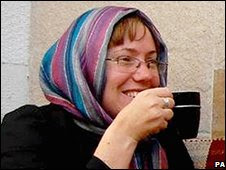 The Taliban claimed responsibility for the killing, saying that she had been targeted because she was "preaching Christianity" -a charge rejected by her colleagues.
Her mother Pat and sister Karen were among around 50 expatriate colleagues, friends and diplomats who gathered to mourn Gayle Williams at the Afghan capital's historic British cemetery.
Rose petals were scattered on her coffin, which was decked with flowers, as she was buried. Miss Williams had asked to be buried in Afghanistan should she die in the country.
The ceremony was protected by a cordon of police, with roadblocks set up to prevent a possible attack.
Her relatives then met President Hamid Karzai at his palace afterwards.
I am sure Rahimullah was there. He would have carefully dug the grave and tenderly tended her plot after the family and crowds departed.
Gayle William’s burial must have been one of the biggest ever to grace that famous green plot, excepting that of Aurel Stein. 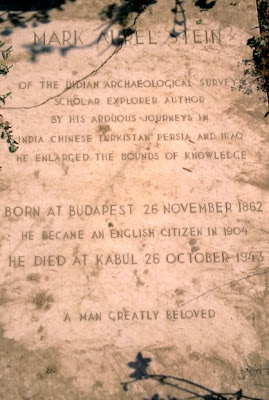 “ On a dry, dusty morning in late October 1943, a procession moved slowly along the road from the diplomatic quarter of Kabul to the Christian cemetery, on the eastern outskirts of the city. The route had been specially watered for the distinguished company, among who were representatives of the King of Afghanistan, and his Foreign Minister, the British, American and Iraqi Ministers, the Iranian Ambassador and the Soviet Charge d’Affaires…. Sir Aurel Stein, archaeologist, explorer and scholar had finally reached the country five weeks before his eighty-first birthday and several decades after first applying for permission to visit its ancient sites.” (from Aurel Stein - Pioneer of the Silk Route by Annabel Walker)

The rich dust of those infidels has fertilized a rare green space under Rahimullah’s care and he will lovingly care for them as long as he can.
Posted by Bob McKerrow - Wayfarer at 07:21

This is quite a cool post for Halloween. My elementary school is still close to a graveyard. Along with my school mates, we found it so intriguing to play among the dead and to read their heads. Now as an adult graveyards depress me. Lol, perhaps because I reflect too much on my own mortality. Hi, thanks for the post.

I suppose Gray's elegy has inspired many of us to write "grave yard" poetry and other such writing.
Many early poems were eulogies meant to honor or recall the deeds and accomplishments of the departed. Recitations of such works were often given at the gravesite or at memorial services -
Many metaphors and abstract symbols were often used in such works. It was generally left to the listener to interpret or pretend to understand the author's meaning. In addition to the praise of noble deeds or lauding of accomplishments, careful reading may reveal a note of sarcasm or critism of the deceased is sometimes present.

In my book 'Afghanistan - Mountain of our Mind' I reflect on the thousands of people I saw killed and many more thousands maimed by landmines and other forms of bloodshed. One of my poems finishes with the lines:

Thanks for your comments Paterika.