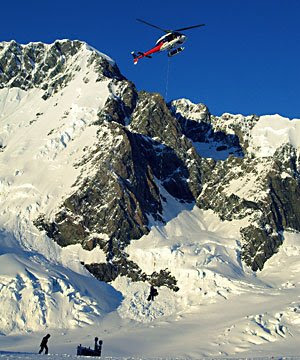 Australian climber Miles Vinar is lifted off Mount Cook by helicopter. His brother, Mark, is missing on the mountain and presumed dead Photo NZPA. Zurbriggen's ridge is the prominent rock ridge starting at the botton of the picture and slightly left of centre and runs almost to the summit.

I just want to put this recent incident on Mount Cook on record. I have reports of accidfents going back to 1913 in my collection.

Lying in an ice cave high on Mount Cook, Australian climber Miles Vinar thought he would die like the brother he had watched fall to his death hours before.

Instead, Vinar, 42, was plucked from the mountain by helicopter on Saturday morning after spending two harrowing nights digging himself out of snow drifts that threatened to entomb him on the mountain.

Police and Department of Conservation staff praised the climber, saying he should be commended as a survivor rather than pitied as a victim.

Vinar's brother, Mark, 43, a doctor from Perth, fell from the mountain on Thursday as the pair were attempting to climb down the treacherous Zurbriggens Ridge after bad weather forced them back from a summit attempt.

Japanese climber Kiyoshi Ikenouchi died on the mountain a week earlier, but his friend and climbing companion, Hideaki Nara, survived.

Andrew said Miles Vinar made it down but could only watch as Mark Vinar lost his grip with his ice axes and tumbled backwards off the shelf.

Vinar yesterday told an Australian news programme he called out to his brother, hoping he had not fallen far.

"I was actually crying out to him `are you OK?', because I didn't see him reappear," he said.

"My hopes were he'd just fallen a couple of metres and had disappeared down there and he'd be OK.

"Then I just saw his body continue down the snow slope, which is extremely steep, and he was just tumbling and finally disappeared out of view."

Mark Vinar was thought to have fallen about 500m to the base, which had many crevasses.

The search for him was called off on Saturday as the area was considered an avalanche risk.

Andrew said Miles Vinar climbed down but a "pretty huge blood trail" convinced him there was no chance of his brother surviving.

The tent and the stove had fallen with his brother.

Vinar "worked for two days" digging away snow drifts that were blocking the cave, McNamara said.

"On Thursday night, actually, I was expecting to die that night," Vinar told Australian television news.

"It was just a continual flow of snow coming down your face ... It was a continual battle just to keep clearing it all the time."

Vinar said he was not hungry but he forced himself to eat a little.

He signalled another group of climbers with his helmet light.

Vinar said Mount Cook was a fitting resting place for his generous and courageous brother.

"I couldn't think of a better place for him, to be part of the mountains he loved so much and he will become part of it, I suppose," he said.

McNamara said the climbers were experienced and well-equipped but accidents occurred regularly in the park.

DOC responded to 20 to 30 incidents per year, mostly from December to March, and there were normally one to three deaths a year, he said.

Thanks to Christchurch Press for permission to use this article.

Hoped to catch up with you yesterday but it didn't work out. Had a few beers with the new manager to pass on some tips and time flew.

I even had that recovery present for you I mentioned previously ( its a big red track suit from the red cross...it would have been beautiful on you mate).

Was really nice to have Robb and Tara come to visit and have a good passionate conversation with them the other night.

Will pop past sometime soon for another yarn when I'm back on the mainland.

Robb left this morning. We had a great time and he enjoyed going to AP to meet you. I am in Timaru from Friday night to late Sunday night but will be in Ch Ch next week.