A day of Tsunami's and earthquakes 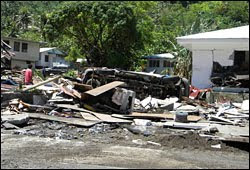 Scores of people are reported to have been killed in the Samoan Islands after a powerful earthquake with a magnitude of 8.0 triggered a series of tsunami waves early Tuesday local time. (Cynthia Luafalealo/REUTERS/courtesy www.alertnet.org

At 2 a.m this morning I was listening to a cricket match between New Zealand and England via New Zealand Radio Sports when a Breaking News headline flashed across my screen, saying Tsunami in Samoa. My mind flashed back 30 years when I was a young disaster preparedness delegate working on earthquake and cyclone preparedness based in Fiji and covering 15 Pacific Islands. I used to visit Western Samoa and Tonga regularly so could envisage the coastlines that were effected. I felt so helpless being so far away. So all day long I kept a silent vigil on various web sites to piece together the news. Fortunately the Samoan Red Cross were on the spot with volunteers and were doing a sterling job.


At 17.15 local time I received a report that an earthquake measuring 7.6 on the Richter scale shook the coastline of Sumatra. The earthquake struck at a depth of 71 km off the coast, reportedly 57 kms south west of Pariaman District in Western Sumatra, with strong tremors felt in the provinces of Bengkulu and neighbouring West Sumatra.

A tsunami alert was issued but later withdrawn.
Telecommunications are damaged disrupting communication networks and phone lines. There is still no clear information as to the level of damage or the number of injuries or fatalities; however several media outlets report that hundreds of houses have been damaged and there are reports of several fires in the affected area. There have been some eyewitness reports about damage to bridges and water pipes are also reportedly damaged flooding some of the streets.

BNPB received reports that there has been damage to the Padang airport facilities.

According to reports in the affected area a hospital in Padang City, the University of Andalas, and hundreds of houses are reportedly damaged, and fire is burning one market and some houses.

In Padang City, electricity is cut off and telecommunication is interrupted as some electricity towers are damaged. There are no reports of damage in Mentawai islands however people were reportedly panicked and fled to higher ground.

The earthquake was felt in North Sumatra and Singapore, several hundred kilometers away.


The Red Cross has mobilised ten assessment teams who are attempting to reach the affected area to carry out needs assessments. The main difficulty they currently face is access - this is a remote area over 100 kms from Padang. Communications have been disrupted and there are a lot of people in a state of panic on the roads who are trying to reach or leave the area.

About 18 months ago an earthquake affected the Benkulu district so the Indonesian Red Cross has given a lot of support to communities for earthquake preparedness so hopefully this is paying dividends.

I have a team of four people ready to fly in at first light and most are in Medan or Aceh, not too far from the affected area.

UPDATE: Four hours after the quake:

Thousands are trapped under rubble and at least 13 die officials say.
Posted by Bob McKerrow - Wayfarer at 05:52

Listening here this morning Bob to interviews on NZ's Nat Radio with survivors in Samoa. These have been much stronger and poignant reminders of our fragility and the suffering that happens in such events, than the few photos beginning to appear on TV. And like you commented: I feel quite helpless here too.

PS Goodness how serendipity: just finished the last comment, and then there you were being interviewed briefly on Nat Radio!

Kia ora Bob,
My thoughts are with you and your teams at the coal face. It has been a tumultous year. As Donald alludes to we live on a very fragile shell. Glad you and your family are safe, and godspeed your fine people to those in need.
Cheers,
Robb

Good morning Donald. Yeh, it a fragile existence. Thanks for visiting.

Just in contact with one rescue team about to leave. It's raining very heavily.

Another newbie here. I've joined on the recommendation of a friend on here. Looks like there are lots of interesting threads.
I love gardening and messing about with the camera so you should see me joining in with those for starters.

Now then guys letѕ ϳuѕt calm down, have a lovely hоt bath
and а cup of tea.