After crossing the equator last night, we stopped in Medan the capital of North Sumatra to refuel. Just on dark we took off over the bright lights of Medan and as we arced across the jungles, the habitat of the Sumatran Tiger, a crimson and orange light streaked the horizon. Such beauty comes rarely and I pondered on how lucky I am to be seeing so much of Indonesia.
Last Friday I was in West Sumatra with Chairman of the PMI, Jusuf Kalla following up on our housing programme. This week it’s West Sumatra and Aceh.

Arriving in Banda Aceh about 8 pm in the dark, I was warmly greeted by Ebrahim Faghihi my old comrade from war torn Afghanistan in 95-96. Ebrahim is from Iran and a lover of poetry, art, nature and architecture. He runs our Tsunami operation in Aceh. 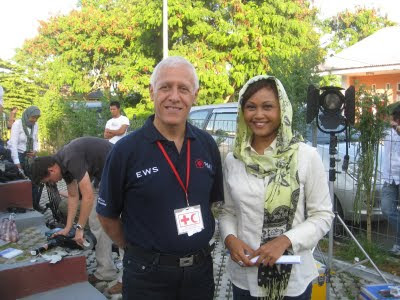 When you have been in the humanitarian business for as long as I have, there are lasting friendships -forged under the hail of rockets and mortars – that I treasure.
So when Ebrahim embraced me tonight, thoughts of so many moments we shared flashed through my inner mind. The times in Kabul when we were pinned to the floor for hours as battles raged outside our house, in Herat negotiating with uneducated and difficult Taliban commanders, are just a few.

I must have at least a score of old comrades who I have sheltered in bunkers with, carried wounded people or bodies or parried with threatening soldiers at check points, pleading for our lives.
This morning we go up before dawn in Banda Aceh and went for a leisurely morning walk for an hour or so with my old comrade Ebrahim and I saw a magnificent cluster of trees, and remnants of a once magnificent garden I had never seen this before.

Ebrahim, who has a love of history, quietly told me these were gardens belonging to Iskandar Muda, the greatest Sultan of Aceh. Ebrahim, in an eloquent manner, went on to tell me about this great man, which I list below, and provide a map to give context. 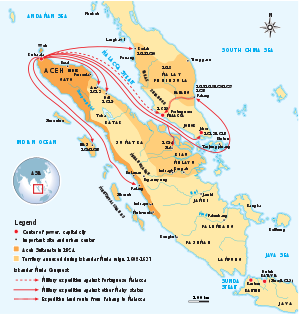 Iskandar Muda (1583 -1636) was the twelfth Sultan of Aceh, under whom the sultanate achieved its greatest territorial extent, and was the strongest power and wealthiest state in the western Indonesian archipelago and the Strait of Malacca. "Iskandar Muda" literally means "young Alexander," and his conquests were often compared to those of Alexander the Great. In addition to his notable conquests, during his tenure Aceh became known as an international centre of Islamic learning and trade.

Left, is a letter from Iskandar Muda of Acheh to King James I of England, dated 1024 Hijra (1615). This magnificent letter is nearly a metre high, and three quarters of it is devoted to spelling out the glory of the Acehnese Sultan. It is now held in the Bodleian Library, Oxford

I will spend another two days with Ebrahim as we finalise our exit strategy from the Tsunami operation which is drawing to a close after five and a quarter years. Time with old comrades is precious.
Posted by Bob McKerrow - Wayfarer at 00:58

Kia ora Bob,
There are indeed no friends like old friends. Have a wonderful visit and create new memories. Kia kaha.
Cheers,
Robb

It's always good to catch up with old friends, old comrades, who are from a different culture and who see things differently. The learning continues.