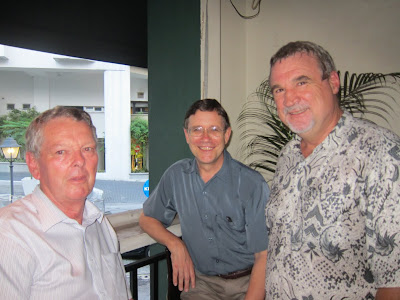 A few weeks back I was in our Asia and Pacific zone office in Kuala Lumpur and met up with Alistair Henley and Jerry Talbot, and at the farewell for Peter Lundberg I spied Jerry and Alistair together. I did some quick calculations and said to Jason Smith our communications expert, "there is at least 114 years experience among the three of us." Jason rushed off and grabbed  his camera, and took this shot.

A little more about these two dedicated Red Cross workers.

Alistair Henley has worked with the International Federation of Red Cross and Red Crescent Societies since 1981. He is currently Director, Asia Pacific Zone responsible for managing the IFRC’s operations and general activities in the entire Asia Pacific region from the Zone Office set up in July 2007 in Kuala Lumpur, Malaysia.

Before that he was Head of the East Asia Regional Delegation based in Beijing from 2003 to 2007. He served as Director of the Development Cooperation Department in Geneva from 1995 to 2000 and Head of the Coordination Department from 2000 to 2003. In these 2 posts he worked with donors to build up support for the Federation’s National Society capacity building goals and longer term programme appeals. This is one of many of Alistair's strengths, his ability to inspire confidence in donors and to negotiate long term funding. When I worked in Afghanistan, Alistair did sterling work in promoting our work and ensuring we got adequate funding.

Between 1989 and 1993 he headed the Regional Delegation for Southern Africa in Harare, and worked as a desk officer in the Asia Pacific and Africa departments of the IFRC (1981 to 1989). He started his Red Cross career with the British Red Cross Society in London (1978-1981).

He holds a Master’s degree in East Asian studies from the School of Oriental and African Studies, University of London. Alistair's grandfather and grandmother were amazing people who worked in what is today's Georgia and Azerbijan from about 1906 up until the collapse of Czarist Russia. He has a stunning collection of his grandparent's photos which is  a real treasure.

Alistair has a encylopedic knowledge of the Red Cross and Red Crescent movement and had the unenviable task in decentralising the leadership of our Asia and Pacific department from Geneva, to Kuala Lumpur, a task he has done with great verve and aplomb.

Jerry Talbot retired on Monday, 31 March 2009, after 42 years uninterrupted service to Red Cross. Jerry Talbot the former special representative to the secretary general for the tsunami operation of the International Federation of Red Cross and Red Crescent Societies, was an outstanding leader, with excellent vision, who took a long-range perspective on the big things and was able to develop concepts. He focused on people and inspired trust in all he met. He was gifted with a strong intellect and made a huge contribution for over 40 years to global humanity. 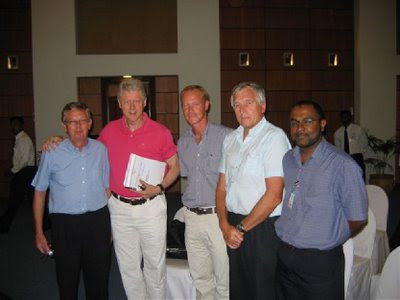 Bill Clinton with his arm round Jerry Talbot on the far left, when Clinton visited the Maldives.

Jerry comes from a large family who still farm In Onga Onga in the Hawkes Bay.

Not surprisingly with his farming background, his second assignment for the New Zealand Red Cross in 1969 was taking some bulls for breeding in Western Samoa. I often joked with him that he was an impressive bull-shipper. The year before that,  he spent one year in Vietnam working on livelihoods programmes for displaced people. For 14 years he was Secretary of the New Zealand Red Cross and under his leadership, it developed into a very well functioning organisation. Next he moved to Geneva in 1990 where he became head of the Asia Pacific Region for the IFRC. Jerry is married to Jen, a very lively and intelligent women, and the have three married sons.

During his Red Cross career he spent time helping his sister run the family farm and when possible, he would slip off to a quiet stream or river, where he indulged in fly fishing. There, like on Thoreau's Walden Pond, Jerry would reflect on the troubled world and come back more motivated to change the world.

In January 2005. Jerry moved to the Maldive Islands where the IFRC built thousands of houses, put in new water supplies, restored livelihoods and assisted many thousands of families. One on the greatest tributes to Jerry Talbot is through his leadership and vision on Dhuvaafaru Island in Raa Atoll, where the International Federation of Red Cross and Red Crescent Societies (IFRC) has created new homes for more than 3,700 people who were displaced from their original island after the Indian ocean tsunami struck in 2004. 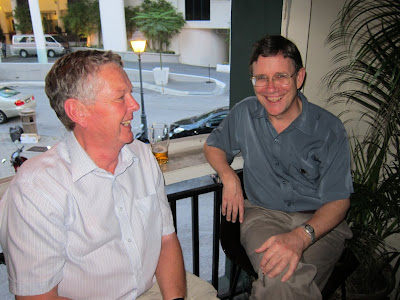 So that's a bit of a ramble about Alistair and Jerry, (pictured above) two guys I have come to admire greatly over the years.

Very good Bob...thank you for this. Eka

Dear Eka, I am glad you enjoyed reading this. Bob

Kia ora Bob,
Onga Onga is right on the heart of Ruahine country so Jerry comes from top notch stock no doubt! As are Alistar and yourself. From out here I write Kia Ora for your presence.
Cheers,
Robb

Yeh, Onga Onga must be heartland Ruahine country. Do they have lectricity there yet ?

How are the hips coming along ? Big improvement I hope. Kia Kaha. Bob

wow very impressive the outstanding work and lives they had.
What an honour for New Zealand to have brought forth such great people

Good to see you coming by. Jerry Talbot is one of those New Zealanders who deserves some form of recognition for the outstanding work he has done for NZ and all over the world.
Bob

And now Alistair has gone. Too soon. May he rest in peace.

Yeh, Joe, he went too soon. But he will be remembered by you and me, and the others of "the race of men who don't fit in " May God bless and keep his family well.

Amazing! This blog looks exactly like my old one!
It's on a completely different subject but it has pretty much the same page layout and design. Excellent choice of colors!