I met an elephant on the way to the super market!

I have lived over 30 years in Asia, and almost immune to the unexpected. But yesterday morning I got a delightful surprise.

After two weeks in a hotel in Colombo, Sri Lanka, we moved into a new appartment building on Friday. Ablai and I woke up yesterday morning, and we headed off to a supermarket just round the cormer. Somehow we turned right instead of the needed left turn, and the next minute we see a baby elephant grazing in the grounds of the Buddhist temple. 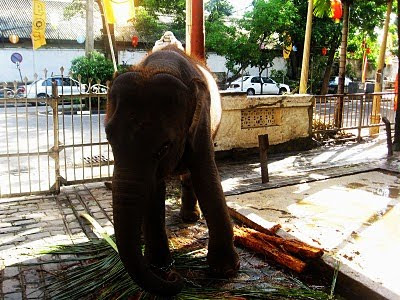 We spent the day unpacking boxes that had just arrived from Jakarta, and in the evening we walked down the road to have dinner with Manish and Monica Pant, friends from India. Manish and Monica are Indian doctors, and Manish  first starting working for me in New Delhi. He  moved to Suva about the time I left Delhi in 2006 where he became the regional health delegate for all the South Pacific Red Cross Societies. He is now working with the Sri Lanka Red Cross Society (SLRCS). So it was a relaxing evening talking cricket and family. 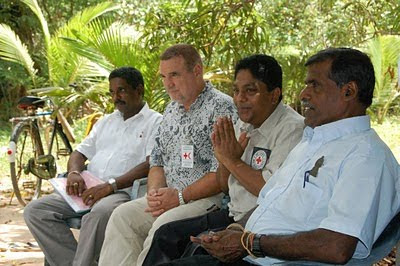 On Wednesday last week Tissa Abeywickrama ( 2nd from right) was appointed to the position of Acting Director General of the SLRCS. Tissa had steered the SLRCS through a massive tsunami operation during the past five years. So I am looking forward to working with Tissa. 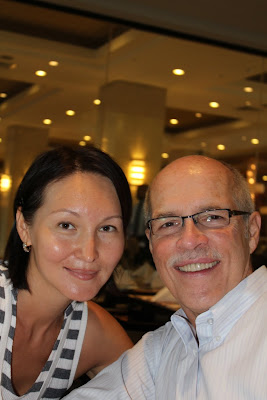 Al Panico right, with Naila. Al is my line manager. Al came over to join us for four days to deal with a number of high level issues pertaining to the tsunami transition process and the IDP programme for displaced people in the north of the country.

It's Sunday evening and I am compiling my Bi Weekly Management report and I am reading all the individual departmental reports. The enormity of the work we have supported the SLRCS on during the past five years is impresive, as is the work we are doing now.

The enormous scale and scope of the operation has meant that thousands of people are now living in stronger homes supported by a more sustainable economic and social foundation. More than 57,000 houses have been built or are being completed. Over 650,000 people now have clean water to drink. More than 94,000 households have boats, fishing nets, agricultural tools or have used cash grants to help them recover their livelihoods. The finishing touches are being put on 363 hospitals and clinics that are being built or rehabilitated. 161 schools have been constructed with a further 11 under way. In Sri Lanka alone, the Red Cross has built 94 hospitals and clinics. When I was in northern Jaffna in June I visited a 300 bed hospital we built there which was providing outstanding medical services. many of the patients displaced by the war in the north.

What is taking up a considerable ammount of time at the moment is raising funds for an emergency appeal  seeking USD 3.4 million or EUR 2,5 million) in cash, kind, or services to support the Sri Lanka Red Cross Society (SLRCS) as it assists approximately 5,000 families (25,000 people) for 24 months;

So after two and a half weeks I am settling in and I hope I get more surprises on my morning walks.
Posted by Bob McKerrow - Wayfarer at 07:25

A delightful post, and so positive. Good to see you're "into things" again. The last couple of weeks I've really felt for you.

Keep up the great work.

btw I may have missed it, but I don't know how to edit/post to Chris J's blog.

Kia ora Bob,
I am in agreement with Donald. You have been in my thoughts as well, and your place has been a great source of real information and learning for me. Have a great week.
Cheers,
Robb

Thanks Donald and Robb for your good wishes and support. I am a bit angry of the compliance of NZ troops in Afghanistan with torture. We are no better or worse than the Taliban.

You are so right 怡靜怡靜怡靜怡雯, and thanks for dropping by and taking time to give feedback. Bob