Ranikhet, A jewel in the Himalayan crown

I plan to spend some days in the Western Himalayas in mid November, so I thought I would do a few postings of my favourite spots there. First is Ranikhet, my jewel in the crown.

Ranikhet is one on my favourite destination in the Indian Himalaya which stands at 1824 m above sea level. Ranikhet is located in the northern Indian state of Uttaranchal. in the Kumaon Hills, From here you get some of the best views of the Western Himalaya.

My good friend from Christchurch, Ed Cotter, agreed with me that Ranikhet was one of his favourites too, and he first visited there in !951 with Sir Edmund Hillary

The 1951 New Zealand Garhwhal Expedition sailed to Colombo and travelled by train through India and on the way to Garhwal, Hillary wrote to Eric Shipton asking if he might join the Everest Reconnaissance Expedition of 1951.

When the four-man party had done with their peak they arrived in Ranikhet to be greeted by a telegram inviting two of them to join Shipton's party. Hillary, as the fittest and best-acclimatised of the four, was obvious first choice, and set out immediately for Nepal. It was the start of a lifelong love affair. With Shipton, too, there was an immediate rapport: "I felt a sense of relief at his unshaven face and scruffy clothes.". 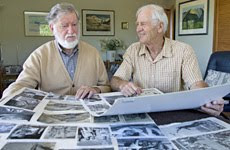 George Lowe and Ed Cotter, members of the first New Zealand expedition to the Himalayas, study photos from the journey, which includes photos of Ranikhet. Photo / Simon Baker

The views from Ranikhet and small villages nearby are superb. You can see the Western Himalaya stunning and the view of the Nanda Devi is superb . There are a number of attractions in Ranikhet that  arew orth visiting such as the Chaubatia Gardens which  is large orchard that is spread over an area of 265 acres. Ranikhet is popular for two of its temples. Jhoola Devi Ka Mandir was constructed some 400 years ago in honor of the local Goddess, who protected the people from man-eating tigers. The other important temple is Kali Devi ka Mandir, which has a large number of bells. The site of the temple is believed to be 5000 years old.

The other places that one can visit include Bhaludham, which is an artificial lake. Upat Kalika some four kilometres from Ranikhet on the main road to Almora is an ideal spot to admire snow capped Himalayan peaks.

In 1975 when I lived in Nepal and again from 2000 to 2006 when I lived in India, I visited the many places in view of the might Nanda Devi. Straddling the regions of Garhwal and Kumaon, close to the Tibetan border, Nanda Devi (7816 m), is the geographical and spiritual high point of India. Surrounding the peak is an incredible expanse of mighty 6000 and 7000 metre peaks. Nanda Devis's inner sanctuary is currently off limits to climbers and trekkers. However at one time it was the coveted destination of several early 20th century expeditions all of which failed to reach the sancturay until Eric Shipton and Bill Tilman reached it via the Rishi Ganga gorge in 1932. Tilman eventually climbed the main peak for the first time in 1936.

The three photos below show views of Ranikhet, starting with a painting by an unknown British artist 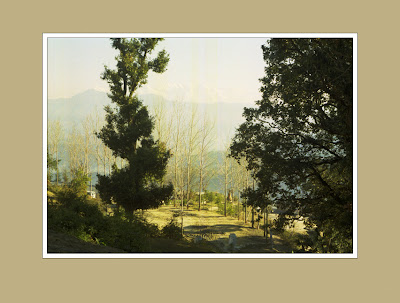 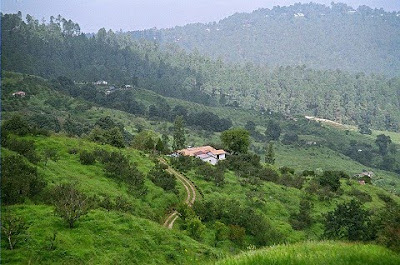 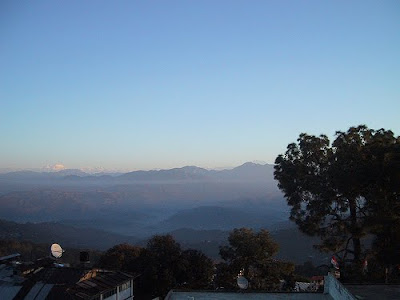 Nanda Devi Base Camp below 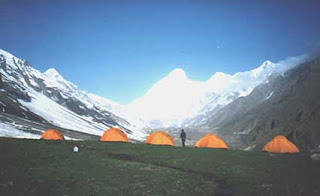 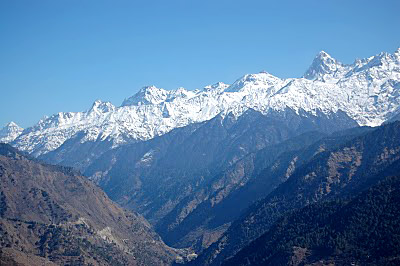 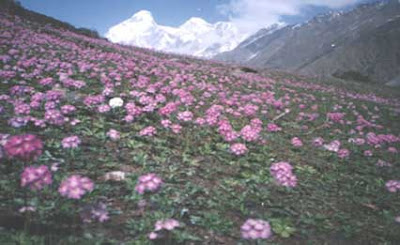 The valley of flowers 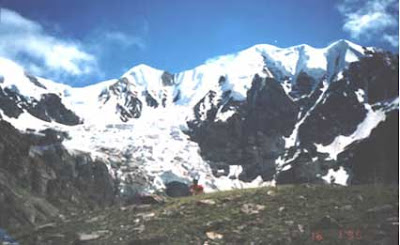 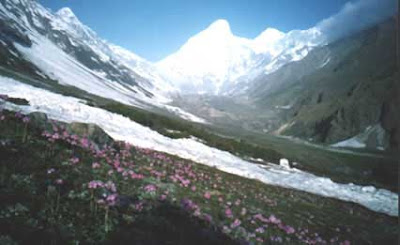 Panchu glacier near Nanda Devi Base camp
Posted by Bob McKerrow - Wayfarer at 01:12

I certainly agree with your assessment of these wonderful places, Bob. In 2006 I was too late to visit the Valley of Flowers, but did get to some other wonderful places, like Badrinath on the day it closed for winter, Urgam, and Kausani, which treated me to views of the Himalaya similar to those of Ranikhet. Garhwal and Kumaon are marvellous places; I hope you have a great time revisiting them, Bob.

So you got to Kausani ? All the places you mention are so full of colour, character, smells and life. How I miss Himachal Pradesh, my favourite state in India. Why don't we do a trip together. I have a small house near Dharamsala. How I got it is a long story. Bob

I'd love to meet up over there some time, Bob. South America's next on the list, but India... it'll always be with me. I have to go back.

I will keep going back to Himachal Pradesh until I die, or maybe I will die there. So there will always be a place for you to stay. My next posting will be on where I stay when I go there. Love your latest posting on pocrastination.

Although I am from India, I have never visited the Himachal Pradesh. But after reading this article,I am very much motivated to visit this beautiful place. Recently Swami Ramdev had a camp on Yoga and Pranayama in HP and he was all praises for this wonderful land.

The camp side on your blog is very awesome i suggest you to get flights for pakistan after that you can visit a beautiful like heaven the place is mazeno pass where you have to hike to reach a camp side.

These mountains are awesome and i wish i could stay there for while, but due to early booking of cheap umrah packages i can't manage to spare my holidays to visit other areas.

I’m a new reader and have been very impressed with your recent post and thought to drop a friendly note. It is really great information related to Busana muslim 2013. Waiting for more posts, is there a way to subscribe to your blog via email? http://rumahbajudiskon.blogspot.com

Ranikhet holiday Cottage is a tastefully made and warmly decorated & neatly kept cottage a home away from home. the caretaker- a local, is available full time to look after our guests- he's also an excellent cook- can serve an Indian meal in half an hour flat- including non veg. all facilities for your comfort have been catered for- but please treat it as a home- it’s not meant to be a hotel or a guest house- we welcome all our guests with warmth.

The pictures are beautiful and so natural :)
Ranikhet is one of the popular hill station in India and there are plenty of hotels in Ranikhet which make your stay more memorable.