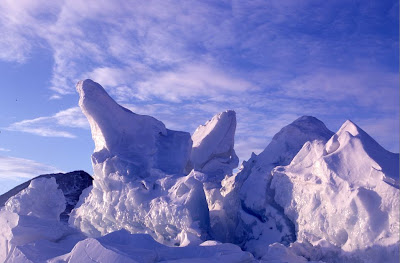 During the 13 months I spent in Antarctica in 1969-70 when I was part of a team doing scientific research, I have followed with deep interest new research that has unveiled many of the continent's mysteries. This latest piece of research has been conducted by the Universities of Edinburgh and Texas, together with the Australian Antarctic Division and the Antarctic Climate and Ecosystems Cooperative Research Centre

The DC-3 departs from Casey Station. The ice-penetrating radar antennas can be seen under each wing.


The belly of Antarctica has given up a little more of its mystery.

Survey data taken across a great swathe of the east of the white continent has allowed scientists to map the shape of the bedrock buried deep under the ice.

It reveals in new detail a huge trough hundreds of kilometres long that is cut by fjord-like features.

Researchers tell Nature magazine that this hidden landscape was probably moulded by the action of glaciers more than 14 million years ago.

This was a time when Antarctica was only part way through acquiring the extensive ice covering we know today.

The team behind the survey work believes its data will improve not only our understanding of Antarctica's past but also its future, as the continent contends with a potentially much warmer world.

"This type of study is important to understand how ice flows in Antarctica and how it will flow in the future," said Professor Martin Siegert, from the University of Edinburgh, UK.

"The only way you can do that is with models, and models need topography on which to grow and flow the ice. If our topography doesn't resemble the reality then the outputs from the models won't either," he told BBC News.

The new findings have emerged from the Investigating the Cryospheric Evolution of the Central Antarctic Plate (Icecap) project, an international effort to comprehend how the East Antarctic Aurora Subglacial Basin has been shaped over the past 35 million years.

Previous research had given coarse hints of the rock structures buried under more than four kilometres of ice, but Icecap is the first systematic attempt to get a higher-resolution image of the mountains and valleys in this part of Antarctica. 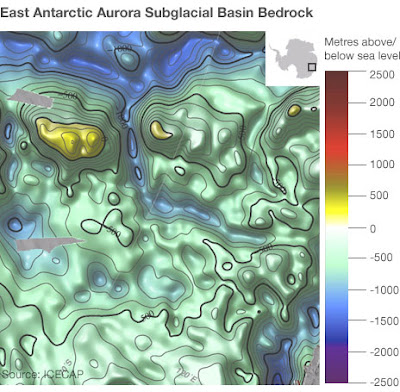 Close in map of the rock under the ice sheet, showing one of the subglacial fjords. All of the green and blue areas currently lie below sea level

The team used a refurbished 1942 DC-3 plane to gather its data.

Packed with instruments, it took off from Casey Station on the coast and flew long lines that traced out a great fan across the basin.

Ice-penetrating radar on the underside of the plane looked through the cap to build a picture of the rock bed.

What the data reveal is a complex landscape created after Antarctica was plunged into a deep cooling period.

The snows that fell over ancient mountains produced mighty glaciers, which then merged to form one giant, spreading ice-mass.

This would not have been a steady process but one that pulsed back and forth - and it is this advance and retreat of the ice that the scientists believe was responsible for carving the deep fjords they now see in their data.

"The modern ice sheet couldn't possibly have done this; it has to have been the consequence of an ice sheet that was much smaller than today's," explained Professor Siegert.

"Comparing our data with geomorphological evidence from other regions of the world, we can be pretty confident that these fjords were formed by fast-flowing ice at the edge of the ice sheet. It's the first evidence we have of how the ice was in phases of growth and retreat as it marched across this subglacial basin to form the ice sheet we recognise today."

A series of radar strips looking down through the ice, in which each strip shows about 2km of depth and about 400km of length; buried mountain peaks are clearly visible and fjords are marked by blue dots

Information about local gravity and magnetism gathered on the survey flights indicates that the structures being mapped are what they seem and are not the result of tectonics - of lifting or rifting in the landscape.

That can be confirmed by drilling through the ice to sample the rock below. This is a goal. The ice core pulled up in the process would also be another invaluable snapshot of past climatic change. By examining bubbles of air trapped in the compacted snow, it would be possible for researchers to gauge past atmospheric conditions and temperatures in this region.

Icecap incorporates researchers from the Universities of Edinburgh and Texas, together with the Australian Antarctic Division and the Antarctic Climate and Ecosystems Cooperative Research Centre.

The aerogeophysical survey is one of several that is "virtually" lifting the ice shroud covering Antarctica to reveal its rock underpinning.

Only a small number of areas on the continent remain to be assessed using modern high-resolution mapping techniques.

Such work is difficult and expensive, however. The remote and inhospitable conditions make for very challenging logistics.

"There are few parts of the world where you undertake pure exploration and Antarctica is one of them," said Professor Siegert. 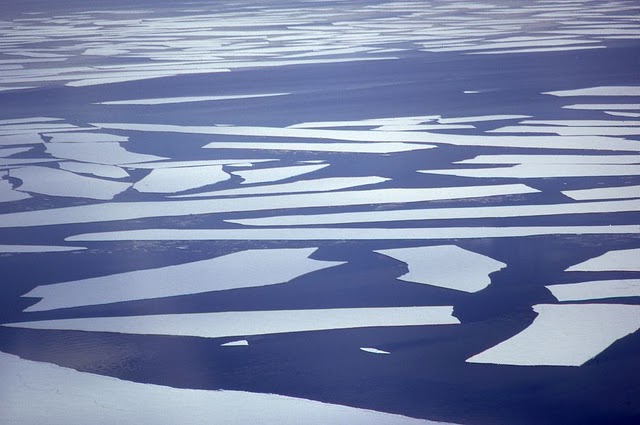 Thanks to Jonathan Amos, Science correspondent, BBC News, for permission to use parts of his article.

Email ThisBlogThis!Share to TwitterShare to FacebookShare to Pinterest
Labels: aerogeophysical survey in Antarctica, What the rock surface of Antarctica is like?. Antarctica rock

None of it matters Bob

It seems the most important thing in the world today for the New Zealand media is that Sonny Bill Bloody Williams, a super-fit young athlete in his prime, beat an overweight, unemployed Tongan preacher on points over 6 rounds.

Stunning news that. My life might never be the same again.
Cheers

So SBW beat a sickness beneficiary. Is that news? Yes Gollum, your life will never be the same again.

hi thanks for this blog so good with images so beautiful

Hi there, everything is going perfectly here and ofcourse every one is sharing facts, that's really fine, keep up writing.