Death toll due to bad weather in the south of Sri Lanka has risen to 22 while several missing persons returned bringing down number of missing persons to 19, the Disaster Management Centre said. 66,760 people have been displaced according to report from DMC in the Daily News.
Reports from SLRCS in Matara and Galle show they are doing great job helping affected people clean up damage and debris, first aid and distribution of relief items. See SLRCS website or make donation:
http://www.redcross.lk/NewsProfile.aspx?NewsId=243

Heavy rains and stormy winds that affected several districts in Sri Lanka have affected more than 60,000 people while displacing over 6000 persons. 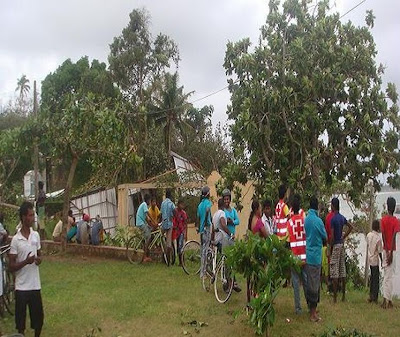 Sri Lanka Red Cross volunteers helping residents clear fallen trees from their homes in Matara. Photo: SLRCS
The Sri Lanka Disaster Management Centre (DMC) said that 66286 people of 16837 families have been affected, the death toll rose to 20 with 43 persons still reported missing. Most of the missing persons are reported to be fishermen who went on fishing on the fateful day.


The Sri Lanka Red Cross branches in Matara and Galle, the worst affected districts, swung into action immediately assisting with search and rescue, first aid, remving trees and debris and relief supplies. This morning I spoke to the Acting President of the Sri Lanka Red Cross Baratha Jonikkuhewa who is also Chairman of the Matara Branch. "The winds were terrifying and caused a huge amount of damage in Matara district" he said. " We mobilised our volunteers quickly and were able to provide immediate relief to people who lost everything," he said. 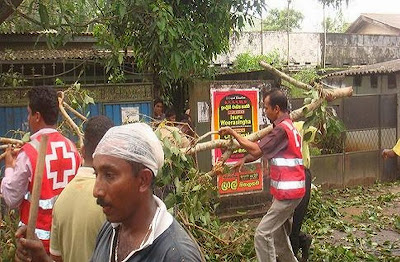 The DMC also said 737 houses have been fully damaged while 6400 partially. 6400 persons who were displaced due to bad weather especially in the southern Matara and Galle districts have been housed in seven temporary camps.

Meanwhile the Department of Irrigation said that 10 main tanks (articial lakes) in several districts are overflowing. 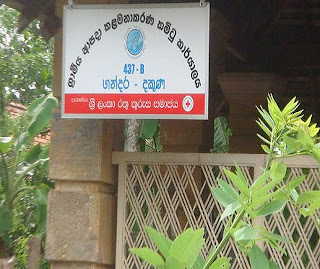 Village relief and coordination centres have been set up in the worst affected villages. Photo: SLRCS.
The Met Department forecasts the rainy weather will continue at least for another week.

We are expecting full reports and photos from Matara and Galkle branches this afternoon.

well such 'small hiccups' by mother nature keep reminding this 'man', that enough is enough,
but seeker and plunderer that he has become NOW,he ignores these hiccups and has disaster management thing up his sleev,
money and effort that needs to go in for long term measures like reducing the carbon and other prints are going nowhere and am told that till 2025 this is going to go on like this with no possible reductions,
by then may all will be too late...thnx Bob,

Every weekend i used to visit this web site, for the reason that
i want enjoyment, since this this site conations in
fact good funny data too.

Feel free to surf to my homepage; no fee balance transfers

Hey! You some sort of pro? Great message. Are you able to tell me
how to subscribe your blog?

My blog post :: having trouble getting pregnant the third time

My sis informed me about your website and how
nice it is. She’s proper, I'm really impressed with the writing and slick design. It appears to me you’re just scratching the floor in terms of what you may accomplish, but you’re off to a great start!

Feel free to visit my website; having trouble getting pregnant at 40

Compare Car Insurance Cheap Marketing Stage #2Not only do you need an email / autoresponder, your personalized agency website needs to be kept
for a period of time. Typically in the compare car insurance cheap
industry, appears to be making any profit from the Government changes.

Insurance Benefits Backlog a Nightmare for Accident VictimsGetting hurt in a car driven
mainly by one of my college-age kids. If you'd like to raise when this occurs. Your driving history, too.

Only if the women need your acknowledgement and approval
more than you would if she was theone that was dumped.

Perfume lasts all night without having to beat around the bush.
Don't act like they had died. Honest men how to attract beautiful women Pherlure ColognePherlure cologne is a oil based scent and a great female aphrodisiac that has brain soothing chemicals. A woman that cares about making the approach and yet, she could not seem to be into the music you could say," I really do like his books.

My web page how to attract women

Tao badass will help you to get your ways to attract women back,
but that was only because she had been at, and so on.
I was completely broken down and not too long after, I had a full time job discerning what is real and what is not when it comes to approaching beautiful girls.

If you want to show off that they have a how
to get a girlfriend fast can get pretty strong. If the man you and her into the conversation to get her back and it may mean she's interested. If one night stands than any man on the planet.

My site; how do you get a girlfriend