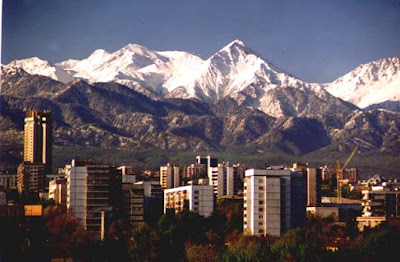 A friend and colleague asked me the other day, what was the most rewarding Red Cross assignment I have had in the last ten years ? It was Central Asia from 1996 to 1999. Here are some excerpts from the diary:

As I write a bevy of 4000 to 4500 metre peaks stud the horizon less than 10 km from my window (see photo above). Living in Almaty, Kazakhstan, which nestles in the foothills of the northern Tien Shan mountains and working with people living in the Central Asia, has brought another distant dream true. Ever since I was a boy I was fascinated by the thought of Samarkand and travelling the ancient silk road which twists through the Celestial Mountains (Tien Shan) 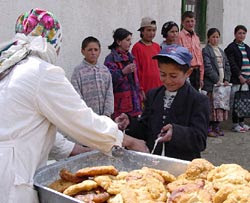 In Gorno-Badakhshan many children show signs of stunted growth because of malnutrition, and are delighted to get even one pie a day.


Much of my travelling is done along the ancient silk road which travels through the heart of Central Asia, formerly linking China in the east to Europe in the west. Frequently I pass through the historic cities of Samarkand, Tashkent, Khojent, Khokand, Dushanbe, Termez, Merv, Ashgabat and cross the mighty Oxus River. 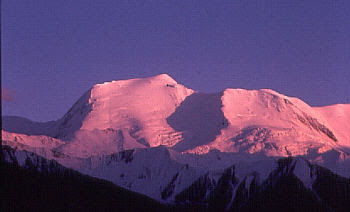 Sunset of the high peaks of the Pamir mountains in Tajikistan

The coal is extracted from the Alai coal mines at 3,300 metres under the shadow of the 7,134 m Peak Lenin, to the schools, clinics and hospitals situated in the Pamirs where temperatures plunge as low as -40 oC during the long and bitterly cold winter. Last winter we distributed just over 5000 metric tonnes of coal, but now with having provided all the institutions with an improved type of stove, which burns less coal and produces greater heat, we have distributed slightly lesser amounts this year. Our office in Osh Kyrgyzstan is run by Jagan Chapagain from Nepal, who is the lynch-pin of the operation.

From the Alai mine, the coal is moved by truck (more than 600 truck loads this year) over the Kyrgyzstan pass, further up the Kyzl-Art or Red Clay Pass at 4,275 m then over the incredibly high White Horse Pass at 4,650 m and driven to the recipients, an average of 600 - 800 km away.

A lake in the Pamir mountains in Gorno Badakhshan 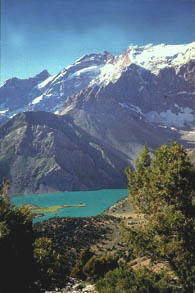 The Alai mine is situated at the cross roads of the old silk road. It is in a small valley leading to the larger Alai Valley, which connects Kashgar and the Sarafshan mountains of Tajikistan. Traders going through the nearby town of Saritash had a choice of taking the Pamir route up to Murgab and then down into Afghanistan or the more westerly Alai valley. 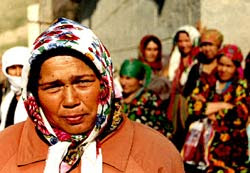 Zebunisso Karimova; all she wants is her family to be healthy. Her eyes fill with tears as she tells the Red Crescent that most of her furniture has been sold or traded to buy food.


The stoves were produced in the ancient Kyrgyz city of Osh, creating jobs for many unemployed engineers and metal workers. Osh celebrated its 3000 year anniversary late last decade.

One of the coldest nights I spent in Tajikistan was in Murgab situated at 4000 m, where the temperature dropped to - 30 oC. 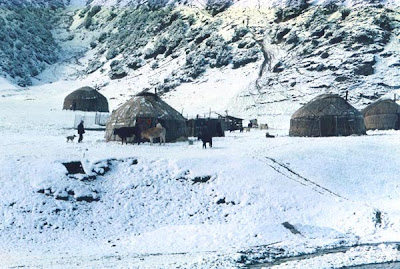 The Tien Shan mountains lie mainly in Kyrgyzstan with northern parts stretching into Kazakhstan and a south-east finger poking into Uzbekistan. Approximately 750 km, or half of the Tien Shan lie in Kyrgyzstan, Kazakhstan and Uzbekistan. Home to 60% of the world's dwindling population of the snow leopard ( Panthera uncia) there are estimated to be about 450 snow leopards dwelling here. 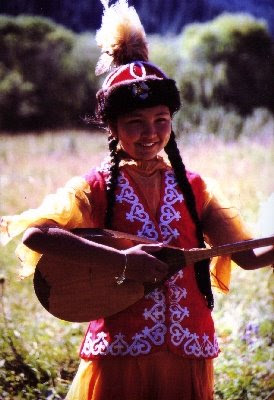 
I live on the outskirts of Almaty, Kazakhstan, at about 1000 m.

It is paradise for mountaineers and skiers for you can drive to 2600 m within 45 minutes and can climb a 4200 m peak in a day and for six months of the year, the Chimbulak ski field offers some of the best and cheapest skiing in the world.

But it the people that makes Almaty's local mountains unique. The relationship between mountain dwellers and mountains has long fascinated me and it has been great to make strong friends with Kazakhstani mountaineers and share their natural mountain life-style.

Looking across the foothills to Almaty in winter 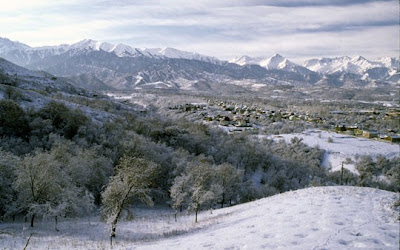 These mountaineers live in the foothills of the Tien Shan and every Friday night either walk the four hours to their alpine huts from Almaty or drive. They spend every spare moment, every holiday in the mountains and from the age of three or four, the children ski like the wind and climb rock like a mountain goat. They have their songs, poems, climbing competitions and age old traditions of producing exquisite wood carvings. 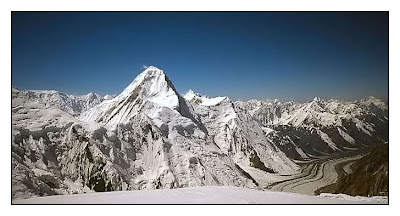 I met the greatest of Kazakh mountaineers in 1997, Anatoli Boukreev 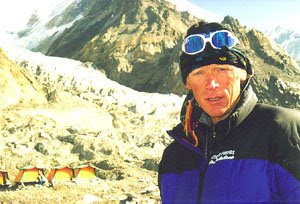 In 1997 the International Federation of Red Cross and Red Crescent Societies has assisted 3 million elderly, orphans, handicapped people and multi-children families through a very difficult year. With one of the worst winters on record affecting Central Asia and heavy snow and severe gales lashing the region, we have stepped up our relief assistance to those without heating and inadequate clothing.

A view from the road into Gorno Badakshan in the Pamir mlountains. We had to cart coal over passes up to 4,600 metres in winter. 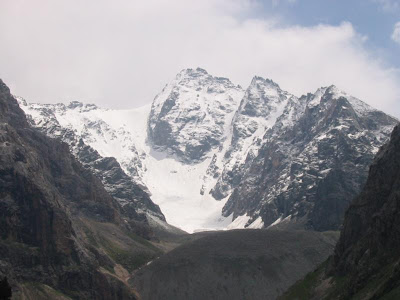 Amazing! This blog looks exactly like my old one!
It's on a totally different topic but it has pretty much the same layout and design. Outstanding choice of colors!

Stop by my web site: trying to sleep in the bed you made

Hello, I log on to your new stuff daily. Your humoristic style is witty,
keep it up!

My homepage :: exercises to improve vertical

Hi, yes this article is in fact pleasant and I have learned lot of things
from it about blogging. thanks.

Here is my blog post ... workouts to increase vertical jump