Before the days of Zero Tolerance.

The work of a Head of delegation is not easy and as the world becomes more complex, the demands on us grow like wild flowers over rocks in the fields.. These meetings are a time for learning, reinforcing, but more importantly, being rejuvenated by people, many of who we have worked with in front line situations. Joanna and I go back to 1979 when she was working in the NZ Red Cross youth department.

We have lost colleagues who died on the job: such as my close friend who I climbed with in Peru and was killed in Vietnam in 1975, Sheryl Thayer, (Chechnya 96) Jock Sutherland (Pakistan 1993), Bo Kywe Pakistan 1994)  Reto Neuenschwander, (Congo 1996.)  and more recently, Khalil Dale.

The loss of Alistair Henley was a huge blow for Deborah and boys, and to all of us who are friends and colleagues, our thoughts and prayers frequently go out to you Deborah and family.. 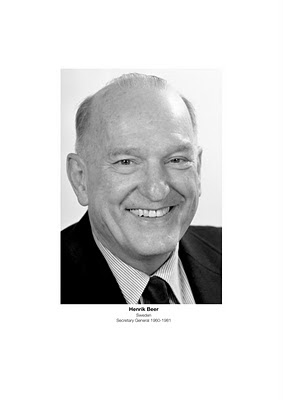 After a few glasses of wine as I get a little emotional at these meetings,  I  think who influenced me most in my Red Cross career, and there is only one person who stands head and shoulders above the rest, Henrik Beer, secretary General of the IFRC, or then known as the League of Red Cross and Red Crescent Societies

My fondest memories of Henrik was on a snowy Geneva winter day Dec 1978 or Jan 1979 when I was a young desk officer at the secretariat. I was duty officer and needed to check the telex for urgent messages. As the snow was quite thick, I didn't want to get stranded in my car, so I skied  with my 20 month old daughter, warmly wrapped, on my back, the 3 km to the office. On arrival I went up to the telex room to find Henrik Beer watching the results of the first run of a Men's Slalom event coming through on the AFP teleprinter. Of course he was following the progress of fellow Swede Ingamar Stenmark. He was delighted to see me and made a big fuss over Anita. After the results came through and I had done my duty officer work, he invited me to his office and we had a long talk and he produced a bottle of schnapps.
Anita was crawling and walking around the office of this famous man and Henrik was so warm and engaging with her. He asked me how old I was and I said, " 31 years. " You have a bright future, and remember one thing. Red Cross is not political but to survive and flourish in this organisation, you must understand politics."
Skiing home that late afternoon, glowing inside from the schnapps  I felt I had really sat at the foot of the Guru. They were the days before "Zero Tolerance" and skiing on a snowy road was permitted.
In late 1981, just before Henrik Beer retired, I hosted him on his last field visit. I was then working in Southern India where the League of Red Cross Societies were running a massive construction project, that of building 233 cyclone shelters along the 2000 km of cyclone prone coastine in Andhra Pradesh, Tamil Nadu and Pondicherry. It was with a great sense of pride that I escorted Henrik on his last visit. As we travelled together from Madras, he asked me, "How is Anita." He had remembered her name from that snowy Geneva day when she played in his office. That was typical of Henrik Beer, he loved people and his work.
Another memory or more precisely, was a souvenir that I had for more than 20 years. In the late 1970's, the League sold off a lot of old furniture replacing it with modern stuff. I bought Henrik's coffee table and used to think of all the world's statesmen and women that had discussed the leading global humanitarian issues of the day. People like Dag Hammarskjold, U Thant, Indira Gandhi, Agha Khan had sipped tea, coffee and water from that table.

I keep a blog on Henrik Beer which contains a lot of lost red Cross history on environment etc: http://henrikbeer.blogspot.com/

ThanKs Joe Lowry. You run a good blog shops too.

Thank you Bob. We value all your thoughts, and what you write so much. It keeps us in touch with what is valuable.

Carl Naucler had a paricularly good story about, and by Henrik Beer - you'll have to ask him if you don't know it.

Thanks Deborah. I have heard many of Carl's Henrik Beer stories, but muszt get him to put them in writing. A truly remarkable Red Crosser, not too dissimilar to Alistair in way he cared and valued people. I know how much you must miss Alistair and how he is constantly with you. He is in the minds, midst and thoughts of many of us who had the privilege of working with him.

Magnificent site. Lots of useful info here. I'm sending it to a few pals ans also sharing in delicious. And naturally, thank you on your effort!

Look into my webpage :: diet plans for women to lose weight Fast

At this time I am ready to do my breakfast, once having my breakfast coming yet again to read more
news.