Chris Jillett The mountaineer and the man 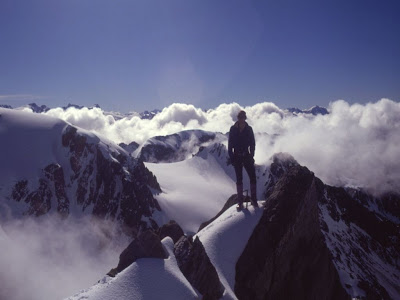 The recent tragedy of Marty and Denali Schmidt has brought the potential dangers of the mountains into the news.  There have been several such news stories over the years.  As a blizzard struck Mount Everest on 10-11 May 1996, tragedy was imminent.  The event was to claim the lives of eight people and attract worldwide attention and discussion.  Among the victims were New Zealanders Rob Hall and Andy Harris.  The rescue party attending the incident included fellow kiwi, and respected mountain guide, Chris Jillett; little did he know that fate would tragically bring him full circle before too long.

A ‘Normal’ Guy from New Zealand

Chris was a kid from New Zealand who studied law, played guitar, and loved mountains; outwardly normal, but extraordinary in his zest for life and influence on others.  He began his guiding career in 1985 at Fox Glacier, where he impressed everyone with his charm as well as his obvious guiding ability. The legacy of Chris, and his fellow guides over the years, can still be felt at Fox Guides which prides itself on a family like environment that is down to earth and friendly as well as professional and expert.  Following in the footsteps of guides like Chris are those who participate in the tours available such as ‘Fox it Up: Heli Ice Climbing Adventure’.  This eight to nine hour experience presents the adventurous with an introduction to the sport of ice climbing in the exhilarating atmosphere of the upper part of the Fox Glacier.  Guides are expertly trained to ensure that they in turn provide impeccable tuition.

The Dangers of Nature
There can have been few guides more expert than Chris Jillett; with his skills he was instrumental in creating a Glacier Guides credential through the New Zealand Mountain Guides Association.  The Association was established in 1974 to create a consistent training program for those entering the professional mountain guiding field.   Of course not everyone who loves the mountains takes them into their professional lives; climbing holds a fascination for many who participate as a recreational activity.  Whatever the status of a climber, negotiating a climb is a serious enterprise; the unpredictability of mountains was shown in the 1996 Everest tragedy.  The unexpected can always happen, and the outcome is sometimes in the hands of Mother Nature alone, but being prepared and well informed helps to tip the odds in a climber’s favour; as does being accompanied by a guide with as much experience and talent as Chris.

A Mountainous Career
Both the talent and the experience were put to good use throughout Chris’s career.  He continued in his connection with the Fox Glacier as well as going on to work as a member of the ski-field patrol team at Treble Cone which today is the largest ski resort on New Zealand’s South Island with a longest run of four kilometres which also has a vertical drop of seven hundred metres.  In the mid-1990s Chris worked at Harris Mountains Heli-skiing in New Zealand’s Southern Alps  as a safety office where he put all his expertise into ensuring the safety of the heli-skiing experience. 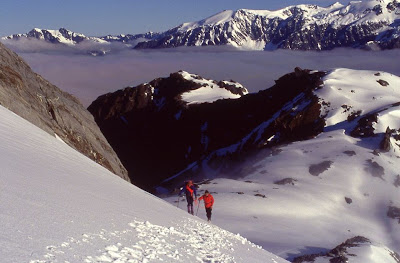 Gone too Soon
Not long after joining Harris Mountains Heli-skiing Chris witnessed the terrible power of nature first hand with the 1996 Everest tragedy; and now to complete the circle that robbed the world of an adventurous and generous soul.  Having worked as a guide in the area for the previous twelve months Chris entered the Himalayan valley of Kullu, Himachal Pradesh, with his party, on Friday 6 March 1998; it was to be his final adventure.  The slope had already hosted four groups that morning and Chris was approximately fifty metres into his run when a client entered the slope above him and the slope broke away creating an avalanche that was approximately five hundred metres wide and three to four metres deep at the point of fracture; Chris was swept seven hundred metres away.  Hampered by incoming clouds those searching for the popular guide found Chris forty minutes later, face down under two metres of snow.  Despite vigorous resuscitation attempts lasting for an hour and a half Chris was pronounced dead at the hospital.  He has left memories with those whose paths he crossed from those like canvas repairer Donald who still uses Chris’s old day pack that he was gifted, to Eric Napier,
the Wanaka operations manager for Harris Mountains Heli-skiing at the time of Chris’s death who described Chris as “a man of integrity -- very balanced, very dedicated to his job; a total professional."  Having affected many lives, at the age of only thirty two, Chris Jillett died as he lived, in the mountains.

Lisa Bonet nee Williamson, has written this article at no cost as she was motivated to honour the life of Chris Jillett. She is a very competent free-lance writer and here are some links to other recent articles she has written. http://herbivoretriathlete.com/iron-to-aid-performance/
http://www.mymedicalmalpracticeinsurance.com/news/study-reveals-errors-in-diagnosis-account-for-biggest-payouts-in-medical-malpractice-suits/http://www.mykidstime.ie/d/junk-food-and-kids-could-it-be-making-childhood-illnesses-worsehttp://oregonconfluence.com/2013/05/16/artistic-expression-as-a-tool-to-beat-addiction/#more-11453