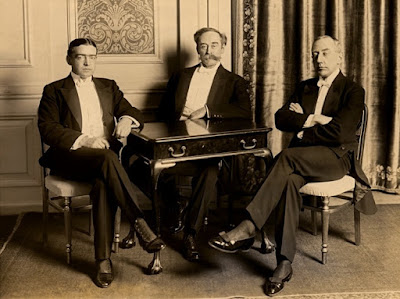 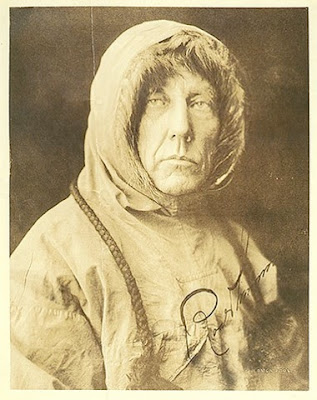 On 14 December 1911 Roald Amundsen, Olav Bjaaland, Helmer Hanssen, Sverre Hassel and Oscar Wisting and their remaining 16 huskies crossed the final stretch of what they called King Haakon VII’s Plateau to reach Polheim, ‘Home of the Pole’, the South Geographic Pole. Amundsen’s team was the first to set foot at this hallowed juncture of longitudes, fully 35 days ahead of a British expedition led by Robert Scott. The Norwegians sledged southwards from their winter base, Framheim, at near sea level on the Ross Sea barrier. They drove huskies across the Ross Ice Shelf, (making use of depots laid the previous autumn) before gaining height up the Axel Heiberg Glacier that carves through the Queen Maud Range. Once through this crevassed section of the Transantarctic Mountains Amundsen pushed on southwards across King Haakon VII Plateau to cross a high point of 3376 metres (now called Titan Dome). Though hindered at times by sastrugi, (ridges of wind-compacted snow) they generally made good time across a firm surface, gradually descending to the South Pole itself at 2835 metres. Amundsen’s men spent several days camped at the Pole, resting and skiing out in four directions, taking sun shots to make sure they were at precisely 90〫South. Leaving a tent behind with a note for Scott to deliver to the Norwegian king in case they failed to get back, they set off home, reaching Framheim with 11 dogs on 25 January 1912 - a return journey of 1600 n.m. (nautical miles) in 99 days, one day short of their original estimate. Wednesday, 12 October 2011 < previous next > Hedgehog House Roald Amundsen - polar explorer Norwegian flag, Longyearbyen, Svalbard Photo: Colin Monteath Cover of Roald Amundsen’s original Norwegian edition Sydpolen - The South Pole. Hedgehog House archive 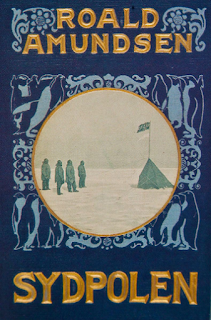 “ Stumbling wide at the limits of the compass
Fur and canvas in the wilderness of pain
You can lose your mind in the panic of snow blindness
Icy winds strike you deaf and numb - at the midnight sun.
None but cowards seek badges of courage
Only fools seek the trappings of fame
There’s no conquest, just an endless striving
There’s no glory, just a restless flame.
No man’s land, white desert, ice mountains
Beyond the pole, let the reckless come
Bathed in light, an infinity of silence
Cleanse the soul, leave the senses stunned - at the midnight sun.”


Australian band Red Gum song Midnight Sun The British, meanwhile, had set out from Cape Evans, Ross Island, on 1 November 1911. In various combinations, they employed dogs, tractors, and Manchurian ponies as well as a support party of men to cross the Ross Ice Shelf on a route pioneered by Scott in 1902. Scott’s Pole party then ascended the highly crevassed and wind-polished ice of the Beardmore Glacier (discovered and traversed by Ernest Shackleton’s British Nimrod expedition in 1908) before finally reaching the South Pole on 17 January 1912. Utterly dejected at finding Amundsen’s tent and fully aware of what the loss of priority at the Pole meant for themselves and the British Empire, they set off homeward facing grim prospects. Injury, gradual starvation and a deep penetrating cold were constant companions. All five perished on the Ross Ice Shelf during February and March 1912, the final trio including Scott himself dying in their tent 11 n.m short of a depot. By then, Amundsen was in the warmth of Australia giving lectures. Over the past 100 years there has been a near-constant analysis of what is often called the ‘race to the Pole’, comparing Scott’s seemingly flawed planning with the clinical efficiency displayed by Amundsen. Whatever one’s views on the merits of relying primarily on ponies instead of huskies to travel across what can be nightmarishly soft snow on the Ross Ice Shelf, it is indisputable that dogs can be fed to dogs to keep going (Amundsen’s plan) while all the food for ponies must be carried on sledges. (In 1910 the efficiency of the tractor engine left much to be desired - although now vehicles powered by internal combustion engines make most polar journeys). Amundsen’s use of huskies and his method of travel with them proved masterful. As a great many Norwegians spend their entire youth perfecting the most refined aspects of skiing, Amundsen’s carefully selected team was able to glide almost effortlessly beside the dogs. Skiing for hour after hour was a vital skill on a journey (skis 244 cm long - extra length to help spread weight when crossing small crevasses), as it took the body weight of five men off the sledges. (Scott’s men didnt ride their sledges either but they coudn’t glide on skis as they had to constantly pull the full weight of the sledges from the front.) 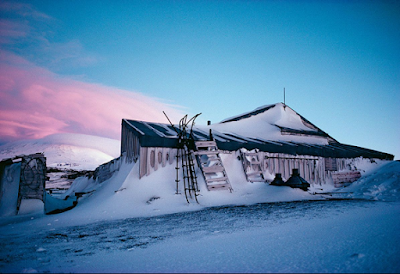 In addition to the energy-saving nature of skiing, Amundsen’s success hinged on his reliance on wearing loose-fitting, windproof fur clothing. Heat generated by the work of skiing is retained inside fur garments and crucially, given the constant brutal cold of the Polar Plateau, excess sweating can be kept to a minimum. (Amundsen did make the mistake of depoting his crampons which could have been a costly error given the large areas of hard bare ice in Antarctica). Conversely, the British were more traditionally clad in woolens and gabardine windproofs. Outfitted this way, Scott’s party was weakened on the return leg by various factors including less and less calorific intake, in part a result of inadequate rations. There was also a lack of fuel due to leaking fuel cans which added enormous stress to the process of melting snow for hydration and cooking what food they had. Amazingly, when death stared them in the face, they failed to lighten the sledges by depoting their rock samples. This all added up to being beaten by the cold. It was prophetic that during the previous winter at Cape Evans, Scott’s right hand man, surgeon and artist Edward Wilson, painted a scene depicting the polar party - five men hauling a sledge, each wearing skis. This painting was done months before Scott made the last-minute decision to increase his party from four to five, in spite of the planned food and fuel being calculated to support four. Somehow, circumstance dictated that, for a party of five, they only took four pairs of skis. Antarctica does not forgive mistakes like that. Scott’s men achieved much in Antarctica including superb exploratory forays into the Transantarctic Mountains, ground-breaking scientific observation around Ross Island and, later, a treasure-trove of quality scientific and geographic literature with comprehensive maps. But when it came to the actual Pole journey itself, some of Scott’s thinking has to be considered muddled. Despite two winters in Antarctica and hard lessons learned on the 1901 Discovery Expedition Scott remained a ambitious Royal Navy officer without a significant aptitude or affinity for dealing with polar terrain. One of Scott’s men, Apsley Cherry-Garrard, who later wrote the time-honoured classic The Worst Journey in the World, described the Pole party as ‘They were an Epic’. Manhauling sledges in the polar regions can be surprisingly efficient but it can also be brutally hard work, especially with heavy sledges, poor snow conditions or battling into strong winds.

To read more, go to Colin Monteath's website and to view his wonderful photographs.

Mistakes you should avoid to be millionaire
NEET Result 2017