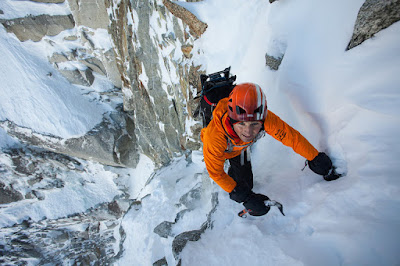 
NORTH CONWAY, N.H. — The Swiss alpinist Ueli Steck was
probably the best mountain climber in the world. In a sport
where a willingness to take risks is as crucial as fitness, he
combined an Olympian’s physique and a calculated daring
few could rival.
His death this weekend at age 40 — on the Nepalese
Himalayan mountain Nuptse, which neighbors Mount
Everest — on a training foray, came when he fell around
3,000 feet while climbing alone.
The equipment and terminology of conventional
climbing are often difficult to convey to the layman.
Solo climbing — which Steck excelled at — is not.
It’s as dangerous as it looks. There is no trick of the
light, no specialized piece of gear. A mistake is fatal.
The more difficult the climb, the more practiced and
disciplined the climber should be.
Soloists can look at it one of two ways. Either the
risk decreases with years of dedicated practice, or
more simply, the more one undertakes dangerous
climbs alone, the greater the chance of an accident.
The long list of great mountaineers who have been
killed climbing alone points toward the latter
argument. As Steck put it in a 2016 video, “The
risk is constantly there — and you deal with it.”
As satellite phones, helicopter access and a lack
of virgin terrain squeeze the unknown and
unexpected out of mountaineering, alpinists
have had to fight for relevancy. With new routes
and unclimbed peaks becoming scarcer, many
have transitioned into completing classic climbs
as quickly as possible. Steck, who often ran up
difficult routes in little more than tights and a
headband, could easily have been mistaken for
a distance runner or Nordic skier. But try as
mountaineering might to masquerade as a
traditional endurance sport, the risks remain,
increasing as gear is stripped away to the bare
minimum.
Continue reading the main story

Speed is an easily quantifiable thing. It’s exhilarating
to be able to move so quickly.
And if mountaineers were measured by this
benchmark alone, Ueli Steck was the greatest in
history. He climbed the Eiger’s infamous North Face
in 2 hours 22 minutes, sprinting up the 6,000-foot
-high “Wall of Death” in the time it takes to run a
fast marathon. In 2015, he climbed all 82 of the
peaks in the Alps 4,000 meters or higher.
(That’s 13,123 feet.) It took him a mere 62 days,
including the time spent biking and paragliding
between mountains.


the nickname the Swiss Machine, but more
important, it showcased what a talented mountain
climber could do if given the time and funding to
prepare like a conventional endurance athlete. He
challenged the image of the bearded, beer-swilling
mountaineer; here was a honed engine who ran
on a Spartan diet and planned his ascents down to
the move. Preparation trumped danger, or so it
seemed.
The availability of Steck’s feats on YouTube and
Vimeo helped bring mountaineering out of the
doldrums. Watching alpine climbing now felt as
fast and exciting as viewing tennis or soccer.
And while the American company Clif Bar
canceled its sponsorship of several climbers
because of discomfort with the risks they were
taking, Steck’s European sponsors, like Audi,
gave him free rein.
Like many of his more traditional athletic
counterparts, Steck had his share of controversial
moments. Having ascended Everest in 2012
without supplemental oxygen, he returned in
2013 with a more ambitious plan, to climb both
Everest and a neighboring peak, Lhotse, in one
push. On the way up, Steck, the Italian climber
Simone Moro and the photographer Jon Griffith
passed a group of Sherpas who were fixing ropes
low on Mount Everest. In doing so, the trio
violated an understanding held by the Sherpas
and Western guides on the mountain that no
one would climb until the ropes were in place.
Steck and his team had no use for the safety
of a fixed rope; they simply wished to sprint
by. In the ensuing confrontation, Moro hurling
an insult at the Sherpas in Nepali didn’t help.
When the climbers returned to camp, they
found themselves challenged by angry Sherpas
who shouted insults and hurled rocks toward
their tent. Fearing for their lives, Steck, Moro
and Griffith hoofed it down the mountain and
gave up their attempt. It is difficult not to make
the assumption that Steck’s elite stature
encouraged the hostile exchange: a clash
of the old and new worlds of mountaineering.
The second blip in Steck’s career also occurred
in the Himalayas. In 2007, he had tried
a mountain called Annapurna, whose deadly
south face had become a kind of Grail for
talented alpinists, combining sheer technical
difficulty with high altitude. The face had
claimed the lives of several pioneers of
Steck’s particular, dangerous game, “fast
and light” alpinism.
The brilliant British climber Alex MacIntyre
was struck by a single falling rock and killed
there in 1982. In 1992, the French alpinist
Pierre Béghin fell to his death, leaving his
partner Jean-Christophe Lafaille to descend
the face alone in a harrowing multiday ordeal.
During the process, Lafaille, too, was hit by
a falling stone, which broke his arm. Steck
attempted the south face in 2007, but was
also hit by rockfall and knocked unconscious.
“Only luck,” he wrote in the magazine Alpinist,
“kept me from dying.” In October 2013 he
returned alone, finishing the route Lafaille
and Béghin had begun, in 28 hours round-trip.
But doubts swirled around his Annapurna
climb. Why hadn’t Steck, for whom the camera
and altimeter watch been constant companions,
better documented his ascent? He claimed a
small avalanche wrenched the camera away,
and his altimeter watch had broken. Ultimately,
he brushed the criticisms aside, letting his
actions on successive peaks speak for him.
Repeating routes as quickly as possible or
linking up multiple summits are specific
undertakings. If you keep getting away
with it, there’s limited or no negative
feedback. You either have a success rate
of 100 percent, or zero. Those who live
into old age are usually the soloists who
quit climbing alone.
Steck was killed before attempting to
link Everest and Lhotse in one marathon
effort — his goal from the interrupted
2013 expedition. Ultimately, speed and
training weren’t enough. Steck will be
remembered as the climber who ushered
mountaineering into its latest modern age.
But his death is a reminder that those on
the cutting edge are still subject to
mountaineering’s oldest companion: tragedy.

I have found that this site is very informative, interesting and very well written. keep up the nice high quality writing. Zurich car service