My Grandparents - The Hodgson Family. 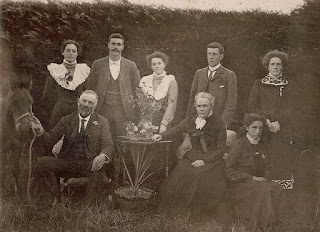 The Hodgson Family.
Back left - Millicent, Bertie, Muriel, Stanley, and Lucy Front Row - Twentyman Hodgson and Sarah (nee Pattrick) and Pearl.
Pearl, my Grandmother on the front right, is not happy about her Father having a Pony in the photo.
This photo may have been taken just prior to Bert and Stanley leaving for South Africa.

I have been reading quite a lot lately about my Great-Grandfather Twentyman Hodgson (1854-1921) who became very skilful as a daring horseman and made a name for himself and a great reputation in handling young and outlaw horses, both in New Zealand and Australia. When he lived in Papanui, he outperformed American cowboys in travelling rodeos, set records for endurance horse rides, and in his final year (1921) rode by horse from Invercargill to Martins Bay and back, to help the McKenzies round up their cattle. Like many great horsemen, he died in the saddle when he was thrown off his horse and sustained concussion of the brain.
Not surprisingly his two sons, Bertie and Stanley were very good horsemen and travelled with the horses to South Africa and fought in the Boer War. My Grandmother, Pearl Annie Hodgson, lived with us in old age when I was a boy and told me many stories about her amazing family. My daughter KIra Pearl is named after her Great Grandmother. 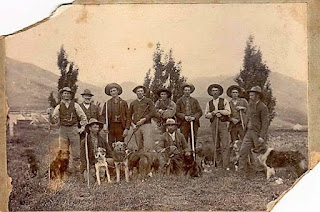 Twentyman Hodgson, my Great Grandfather, 2nd from the left with a group of friends in Southland.