He hugged me then walked away from base camp as the towering peaks of the Cordillera Vilcabamba stood unmoved. That was almost 51 years ago and we have not seen each other since. Today he made contact with me. 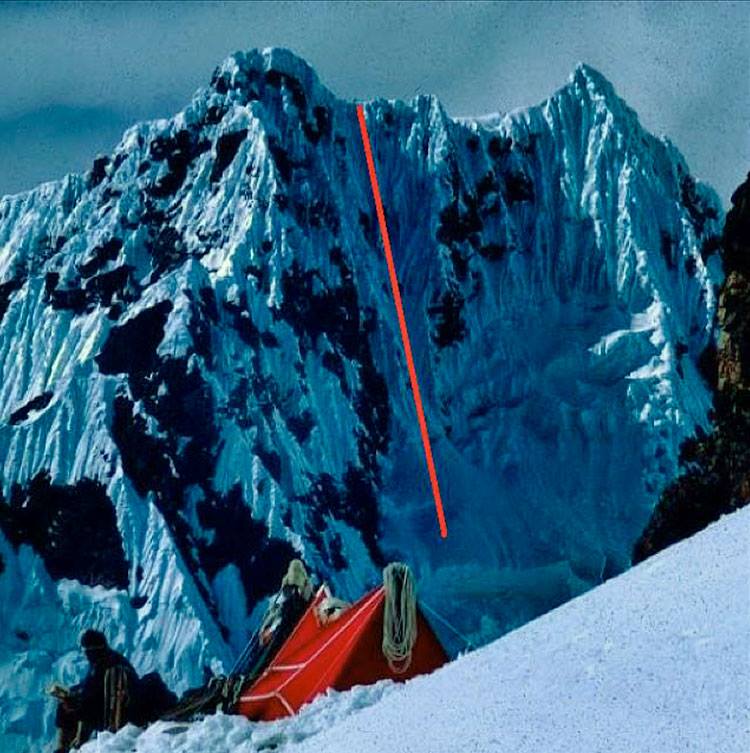 Photo: Our route on the North Face of Mellizos in red.For six weeks in 1968, J.E.S Lawrence was my climbing partner in the Cordillera Vilcabamba. I had just turned 20 and John was 10 years older than me and taught me so much about mountaineering as he had climbed in many of the mountain ranges of the world. He was my first mountain mentor. We did quite a few first ascents together with the most memorable being the first ascent of the North face of Mellizos.Here is what John wrote after the climb:"The hiss was changing now to a thunk and crash, as big stuff began to clean out our gully. The vertical sastrugi are so steep in the flutings that the sun acts as a sort of razor. When the ice blocks flew by, we would stop munching, and look at each other, and Bob would begin to mutter. We could see our red tiny tents clearly between our feet as we sat, in a kind of mockery. I thought it reminded me of being on a ship unable to make port, moored in the roads outside when you have a date and you can see the lights onshore and you wonder what she's doing.We sat on the ledge for hours, listening to the mountain shivering, watching the detritus rolling out down the face below. At some point, a hummingbird flew close on the face beside us, beak into tiny flowers, in a brilliant display of minuscule aerobatics, then gone in a flash as if it was never there. If only we had had those wings. We began timing the space between the chunks of ice. As the sun recedes from the face, you can almost hear the ice re-gelling, as the sound volume gets turned down. I was prepared to spend the night on the ledge if necessary… we had good gear and were in good shape. But after counting two or three 3-minute silences, and no big stuff for an hour, we decided to chance it. We descended as fast as we dared, on belay, ensuring our belay stances were always out of the direct fall line. I don’t think either of us has ever moved so fast over ice, and I count it among the more purely lucky episodes in my climbing experience, but despite both of our mutual remonitions as to caution, we simply shot down, only bumped by the odd shot from above."
See Less
Posted by Bob McKerrow - Wayfarer at 21:28 8 comments: