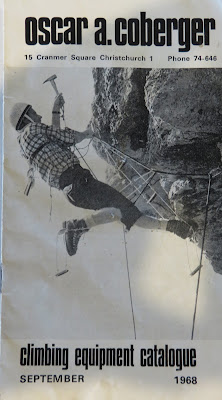 I was saddened to read in the Star today that Anton Coberger died on 21 September. Anton will be remembered for his contribution to skiing and the Coberger mountaineering and skiing shop in Cramner Square. Anton and his siblings lived in Arthurs Pass and did their schooling by correspondence and were very active members of the ski club at Temple Basin. Many of us have fond memories of his father Oscar, who was also a very active skier and climber and buying equipment from Oscar and Anton. His daughter, Annelise became the first Southern Hemisphere athlete to win a medal at the Winter Olympics when she won a silver in the slalom at the 1992 games. In 2004 his very close friend and leading NZ climber of the 60s and 70s Lyn Crawford died and Anton wrote a very moving obituary for Lyn in the 2004 NZAJ and detailed the many climbs they did in their twilight years. R.I.P Anton. 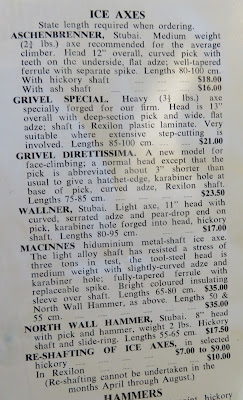 It was 40 years ago today that Nick Banks became the 2nd New Zealander to climb Mount Everest. I remember in 1972 while working at Aoraki Mount Cook in the mountain rescue team, getting a callout saying a group of young Taranaki climbers had traversed Mt Cook from Plateau hut, and one fell through a cornice on the summit ridge and pierced his thigh. The guy who was supposedly injured was Nick Banks. They were a very competent team and they had wrapped up the wound in Nick's thigh and when we came across him he was descending quite normally. That was the first time I met Nick and of course he went on to greater climbing feats. Nick is standing in the middle of the photo in a reddish shirt. Photo: Bob McKerrow 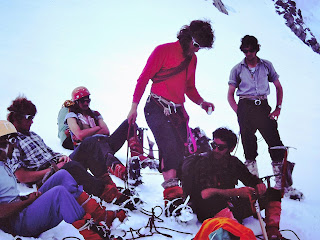 Nick Banks says the day he reached the top of the world's highest peak was the best he ever had in the mountains.
But, unbeknown to him, the triumph would be tinged with tragedy.
On October 2, 1979, Banks, now living in Wales, became the second New Zealander, and the 100th person, to climb Mt Everest after Sir Edmund Hillary in 1953.
Up until then, Banks, a former New Plymouth man, had never climbed a peak higher than Aoraki/Mt Cook.
He planned to remember the 40th anniversary of the feat at with friends and family in North Wales, where he has lived for the past 33 years with wife Lindsay, and owned a guiding business and a cafe. "I may even have half a shandy," he said by email.

Most people can name the first New Zealander to climb Mt Everest but few pick Banks' name as the next Kiwi to reach the top of the 8448m Himalayan summit.
The former Spotswood College pupil achieved the feat as part of an eight-strong West German-led party.
However, the expedition was touched by tragedy, with two of the climbers dying on the way down from the summit.
Since then another 49 New Zealanders have made the ascent, including two from New Plymouth - Andy Harris, who died while descending Everest in 1996, and Julian Haszard in 2004.
Few of Banks' expedition party will be at the 40th reunion, with most of the 13 climbers and Sherpas now dead, Banks said.
In an interview in 2004, Banks said climbing high peaks was a balancing act between "being afraid and staying cool, even though you know you're going a little bit crackers".
It helped to be a bit of a daredevil and be mentally tough, he said.
"Some people thrive while others hate it. The experience can only be enjoyed when it is all over."
Looking back on his Everest climb, Banks a retired mountain guide, said he only climbed for the views, and the physical and psychological challenge.
"I don't have a spiritual bone in my body," said the 67-year-old, who spends most of his summers sailing in the Scottish Western Isles.
Banks first climbed Mt Taranaki when he was 12 and went on to be the first to scale the six ridges and six faces of Aoraki/Mt Cook, and qualify as an international mountain guide.
But he had never climbed higher than Aoraki/Mt Cook before Everest, he said.
He was still grateful in his early climbing experience to have a group of Taranaki Alpine Club mentors, including the late Colin Wright, Eric Larsen, Dave Clough, John Jordan, Ted Thompson, and George Mason, who took him "under their wing".
Jordan said Banks was very skilled as a climber, and he was not surprised when Banks reached the summit of Everest.
"He enjoyed challenges, he wasn't reckless and was always keen to develop his skills further."


Mountaineers from around the world have gathered in Nepal for the spring climbing season. Nearly 300 people have died attempting to climb Everest, but the mountain continues to draw climbers
In 1977 Banks was a member of the NZ Everest Expedition which reached the South Col, a sharp-edged pass between Mount Everest and Lhotse, the highest and fourth highest mountains in the world, respectively.
The trip laid the foundations for the successful ascent two years later.
Banks became friends with Gerhard Schmatz​ and his wife Hannelore​, who invited him to join their Everest expedition in 1979.
In an NZ Alpine Journal article in 1980 Banks remembered the summit day was the best day he had ever spent in the mountains.
The night before he had felt the summit was a possibility, and later on the climb to South Col, just under 8000m, he felt the battle with the mountain begin, he said.
Banks was in the second party to summit after Schmatz had led another party to the top the day before.
Thick cloudy conditions on the summit meant the the group could only spend 10 minutes taking photographs and shaking hands, before climbing down as their oxygen tanks emptied.
The lack of views and "grim conditions" at the summit did not take away "the pleasure and relief of having made it", Banks said.
He felt "pretty rapt" to be at the top but apprehensive about getting down.
Banks reached South Col camp four hours later and fell asleep.
In Banks' group were Schmatz's wife, Hannelore​, and American Ray Genet, who both tragically died on the descent when conditions deteriorated.
Genet had decided to descend solo, while Schmatz who stayed with him when his oxygen ran out, later collapsed and died from exhaustion.
All the climbers were experienced but the lack of oxygen, and the freezing temperatures bite at their hardest during a descent, and mistakes are made, Banks said.
The conditions had been good and all the climbers were of a high standard "but sometimes that's no protection", he said.
Banks said he was reluctant to criticise anyone "who wants to do anything", including those who add Mt Everest to a lifetime bucket list.
"There is a lot of nonsense talked about the lack of experience and technical ability of people on Everest today," he said.
"The vast majority of them are very experienced and competent climbers.
"When I went to Everest first in 1977 I had never climbed anything higher than Mt Cook.
"I would question some people's behaviour on the mountain but when you get that many people anywhere a few of them are going to be bastards."
However he said the overcrowding on Everest was "ridiculous."
"It is just lack of will and lack of good management on the part of the Nepalese Government, and the totally ineffective liaison officer system," he said.
Banks would rather emphasise the big clean-up carried out by the Sherpas over the past years.
"Despite all the negative reports Everest is still an amazing place to be."