The Most Famous Photograph in the World

Time Magazine named him one of the 100 most influential people of the 20th century,while an Alberto Korda photograph of him entitled Guerrillero Heroico was declared "the most famous photograph in the world." 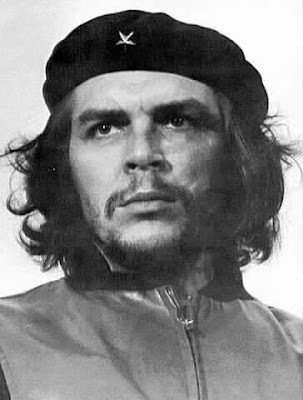 I left New Zealand in early 1968 to travel to South America. I was 19 years old and filled with idealism and believed the world could be a better place with the right leadership.. I was hoping to climb high Andean peaks in Peru, but in the back of my mind, I wanted to get to know my teenage hero, Che Guevara. He died 5 months before I left for Panama, Columbia, Equador, Peru by ship. On arrival in Peru in early 1968, I could see why Che wanted to change the face of South America. I saw poverty, discrimination and exploitation in almost every town and village I travelled to.

I often think about what he might have achieved had he not been killed in Octover 7, 1967. On my return to New Zealand I eagerly read his book " Bolivain Diaries" which shaped my young mind. Those were heady days.

If he had of been alive today, he would have turned 80. That photo of Che was etched in my mind as a young man and is still there today. He along with Archibald Baxter, Gandhi, Henri Dunant, Eileen McNatty (my mother), Kate Shepherd and Nelson Mandala shaped by thinking and philosophy and I treasure their influences dearly.

So I was happy to see on TV that thousands of people have witnessed the unveiling of a statue of Ernesto "Che" Guevara in his Argentine birthplace on what would have been his 80th birthday.

Events to mark the life and legacy of the man most simply know as El Che were held around the city of Rosario.

While Guevara was Argentine, born and bred, he had more followers and was better known around the world than in his home country.

He flourished in Cuba, fought in Africa and died in Bolivia.

But now the man known simply in Argentina as El Che is home.

The four-tonne bronze statue that has been unveiled in Rosario joins the numerous Che museums dotted around the country. 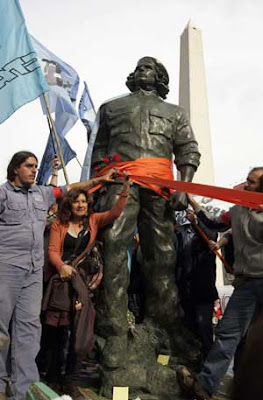 The statue of Che erected today in his honour


It's a brand that encapsulates a whole store of values, a whole load of ideas that people hold

Che the revolutionary, Che the icon, Che the seller of everything from vodka to T-shirts is everywhere.

Michael Casey, who has studied the phenomenon and has a book coming out on the subject, said the icon had become a brand but not just in a capitalist way.

"It's a brand that encapsulates a whole store of values, a whole load of ideas that people hold," he said.

"And they therefore sell those ideas, whether it's leftists in Argentina or manufacturers of snowboards wanting to sell snowboards under a revolutionary label."

Che Guevara's children travelled from Cuba to join thousands of followers from Argentina and beyond in Rosario for the birthday celebrations.

But events had to be curtailed because of widespread protests by truck drivers and farmers blocking Argentina's roads.

Che would probably have approved of that kind of radical action far more than his new statue and certainly more than today's ubiquitous Che merchandising.

What does Wikipaedia say about Che:

As a young medical student, Guevara travelled throughout Latin America and was transformed by the endemic poverty he witnessed. His experiences and observations during these trips led him to conclude that the region's ingrained economic inequalities were an intrinsic result of monopoly capitalism, neo-colonialism, and imperialism, with the only remedy being world revolution. This belief prompted his involvement in Guatemala's social reforms under President Jacobo Arbenz, whose eventual CIA-assisted overthrow solidified Guevara’s radical ideology.

Later, in Mexico, he joined and was promoted to commander in Fidel Castro’s 26th of July Movement, playing a pivotal role in the successful guerrilla campaign to overthrow the U.S.-backed Cuban dictator Fulgencio Batista. After the Cuban revolution, Guevara served in many prominent governmental positions, including president of the national bank, minister of industry, and “supreme prosecutor” over the revolutionary tribunals and executions of suspected war criminals from the previous regime. Along with traversing the globe to meet an array of world leaders on behalf of Cuban socialism, he was a prolific writer and diarist. One of his most prominent published works includes a manual on the theory and practice of guerrilla warfare. Guevara left Cuba in 1965 to incite revolutions first in an unsuccessful attempt in Congo-Kinshasa and then in Bolivia, where he was captured with help of the CIA and executed.

Both notorious for his harsh discipline and revered for his unwavering dedication to his revolutionary doctrines, Guevara remains an admired, controversial, and significant historical figure. As a result of his death and romantic visage, along with his invocation to armed class struggle and desire to create the consciousness of a "new man" driven by "moral" rather than "material" incentives; Guevara evolved into a quintessential icon of leftist inspired movements, as well as a global merchandising sensation. He has been venerated and reviled in a multitude of biographies, memoirs, books, essays, documentaries, songs, and films. Time Magazine named him one of the 100 most influential people of the 20th century,while an Alberto Korda photograph of him entitled Guerrillero Heroico (shown at the start of article), was declared "the most famous photograph in the world."
Posted by Bob McKerrow - Wayfarer at 00:14

Kia ora Bob,
I always remember my first year attending the University of Wisconsin, which was a student bastion of protest during the Vietnam war, and the echoes of which still remained strong in the late 70's and early 80's when I went there. The polarization had begun on campuses by then, those young Republican minded there for a job, and we leftist leaning radicals protesting America's involvement in central America, the CIA, Ronald Regan's environmental rape. Posters of Che and tee shirts bearing that photo were quite common. I'm afraid most of us were simply going through a phase. It feels good to resume the fight, or realize I perhaps have always been, in some small way, and maybe I was even right back then. Kia ora Bob.
Ka kite ano,
Robb

I was so interested to read that you recall the posters of Che and tee shirts during your student days. He certainly was a rallying point and some mystic rebel who represented someone who tried to change an unjust world. That photo represents for me, along with Joan Biaz, Bob Dylan and Judy Collins ( The Patriot Game), the anger many of us felt in the 60s and 70s about the way the world was heading with the Vietnam war and repression in Latin and South America. We need to resume the fight against climate change, environmental degradation, spiraling poverty and some of the unjusr wars around us.

Kia ora Bob. I wasn't around when Che was, but I read his Bolivian Diaries about seven years ago and, to be honest with you, I was bored. He did not sound like a revolutionary at all, he was more concerned with managing his asthma.

I know there is a lot more to Che than his days in Bolivia. Have any of his journals from previous campaigns been published? May be they would give me a better idea of why he is such a figure of inspiration.

Yes indeed he made a compelling picture and "young rolling stones" would agree with me. As a universal hero perhaps not. Most of my friends I met in my college days in Canada in the 70s during the summer holidays would find themselves in Peru and the regions around. The young radicals found these regions in South America very appealing in more ways than one. It is not hard to figure out why.

I love to take some photograph because i usually travel too much,one day i saw a site called
costa rica homes for sale
and it seemed very wonderful, and i am very exited, now i want to visit this beautiful country and take a lot of photos.

Thanks mate... just dropped by. Will look for BIKE STN when we get to Seattle. Still in Buenos Airies.

Thank You a ton for writing such a wonderful piece of information. Keep sharing such ideas in the future as well. This was actually what I was looking for, and I am glad to came here! Thanks for sharing the such information with us.

Write more, thats all I have to say. Literally, it seems as
though you relied on the video to make your point.
You definitely know what youre talking about, why
throw away your intelligence on just posting videos to your blog when you could be giving
us something enlightening to read?

In a diabetic diet maximum 20% to 30% of daily caloric needs should be
from fats. These tools will enable you to get strength training on an everyday basis.

Ensure that your journal consumption is fat-free or skim.

I'm really impressed with your writing skills as well as with the layout on your weblog.
Is this a paid theme or did you modify it yourself?
Anyway keep up the excellent quality writing, it's rare to see a nice blog like this one these days.