History on my back

Caption: Ed Hillary (left) and Murray Ellis (r) at the South Pole in 1957. Murray and his son David ran Arthur Ellis and Co with the Fairydown label for many decades.

I am slowly catching up on the time difference and jet lag. I have just hung the washing out on the clothesline and noticed more daffodils flowering, despite the snow sitting low on the nearby Southern Alps. Yesterday I started to explore Christchurch and reunite with my 3 daughters who are currently in Christchurch. Spent half a day yesterday walking round central Christchurch and doing a little shopping with my daughter Tania, and her husband Al. 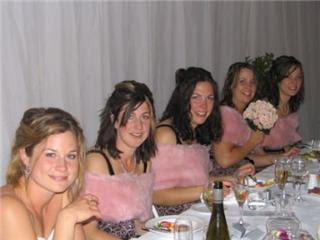 My five daughters from L to R: Kira, Anita, Tania, Ruia and Aroha.

The great thing in New Zealand I can buy clothes off the hook which fit me, unlike Asia where I can never get shoes or clothes to fit. Bought some good Fairydown clothing yesterday; warm tops and trousers. While trying on the Fairydown clothes my mind flashed back to 1877 when this company had its humble beginnings in Dunedin. This company kept food on my Mother's table during the depression of the early 1930s when she worked for them for eight years just prior to World War II. So I have always had a soft spot for Fairydown the brand which came from the old established Dunedin company. I wore their Down Jackets in Peru in 1968, Antarctica 69-70 and they sponsored me in 1985 and 1986 on two North Pole expeditions. The company made its name making high quality Eiderdowns from the Eider duck feathers. An old mentor of mine was Murray Ellis who went with Ed Hillary to the South Pole on tractors in 1957. His son David who carried on Fairydown for some years before starting up his own company Earth Sea Sky. Murray is best known for his role in keeping the modified Ferguson farm tractors going when, in the summer of 1957-58, the New Zealand expedition beat their British counterparts to the South Pole. It was his Dunedin company, Arthur Ellis and Co, which kept the men warm in purpose designed polar clothing and sleeping bags. Murray was part of an inner circle of five New Zealanders known as The Old Firm, led by Sir Edmund Hillary, who achieved this ground breaking feat. Following the Trans Antarctic expedition Murray joined Sir Edmund Hillary in the Himalayas on several climbing trips and to help with aid projects in Nepal. It is amazing how a trip to a shop and seeing a label can trigger such memories.

Last night I took the girls and their partners out for dinner at a restaurant called the Lone Star. It is a mixture of Kiwiana and a cowboy theme, rich in history of frontiersman and risk-takers. The walls drip with a rich collection of art and memorabilia enhanced by the addition of some local art and a fair swag of Kiwi tunes in combination with our famous country music.

The music of Johnny Cash, Elvis Presley, Crowded House, Johnny Horton, Dwight Yoakam, and Dolly Parton music rings out and they have all become part of the culture here. The food was superb serving the best and freshest local produce served up with a genuine smile in generous portions for a totally fun, unpretentious night out.

Its 9.15 am and the sun has just come out. I think I will take Diva for a walk and get some sun and exercise. The Fairydown clothing will keep me warm as I walk with history on my back.
Posted by Bob McKerrow - Wayfarer at 03:20

Email ThisBlogThis!Share to TwitterShare to FacebookShare to Pinterest
Labels: Arthur Ellis and Company.

Kia ora Bob,
Hope that Fairy Down gear gets a chance to work for you a bit higher up as well. I bought all my gear, MacPac, Fairy Down, years ago when it was still NZ made and I was very loyal to the gear. My pack, sleeping bags, and my outers are still in good nick after many years wear. Can't say my loyalty is still the same after most of the gear we get now is all made off shore. Dollars talk loud I guess.
Beautiful daughters Bob! I would have been at home with a big stick in hand fending off their potential suitors - a never ending job by the looks of it! Kia ora Bob, have a great day.
Rangimarie,
Robb

All this begs the question - Is New Zealand a great place to have a holiday in where you see everything through the fresh eyes we had as youngsters - or a great place to live. I haven't lived in New Zealand for nearly 20 years but have a highly romanticised vision of it - particularly those valleys like the Hopkins and Landsborough and the head of the Mueller Glacier.

I reacted to being in Christchurch last year just like you did in your blog yesterday. But living there bwefore I reach retirement age! That's a more difficult question to answer. The grass always looks greener on the other side of the fence. Enjoy the snow when you get there.

Hi there Bob, I have just read a few of your last posts, seems like you have quite the exciting life.
I have also checked your book titles which contain a very short bio of yourself.

It is true that I am looking for something different, life of late has become over stressed due to lack of money and a lack of direction.

I would like to write more, but I think that it would be beter to email you if you make contact.
So here's to your good health,
Stu, your Lonestar waiter.

Dear Robb
I too remember that strong loyalty to companies and brands but as you said "I bought all my gear, MacPac, Fairy Down, years ago when it was still NZ made and I was very loyal to the gear."

Now that most of it is made overseas our loyalties have vaned and we go for the best and cheapest. David Ellis, who runs Earth Sea Sky employs New Zealand staff here in Christchurch to make his products. I hope to meet David in the next few days.

Four of my daughters are accounted for and only the youngest is single. She is a marathon runner and no man fast enough to catch her. When are off to the Ruahines ? Have a saafe trip.
Ka kite ano.

The green, green grass of New Zealand is certainly attractive and compelling when you are back for 3 or 4 weeks every year or two. Like you, I have lived overseas for the last 15 years and it is such a beautiful and romantic country when you recall your young days in the mountains and valleys while sitting in some faroff country. The reality of living here is different. The advantages are many as you can live comfortably if you have saved a bit. The landscape is stunning and generally unpolluted and the people warm and quite caring.

Could I live here ? I think yes and am preparing for that. Perhaps in 3 or 4 years time. I suppose the biggest draw card is my family: children, grandchildren and brothers, sisters and people I met in the mountains.

Enjoyed your comments. Thanks

Stuart, My Lone Star Lone Ranger. How are you ? You are the best waiter I have been served by in Aotearoa and I will recommend you for waiter of the year.

I really enjoyed the food the other night. It was delicious and the portions large enough for a growing man. You can contact me on email: bob.mckerrow@gmail.com

Stu, we all need to make choices in our lives and I believe a man of your personality and intellect, can really go places. You are the reason and many like you, that I return to NZ regularly. You care.

Kia ora Bob,
Off Tuesday afternoon when I pick up my mate at the airport, a torch light walk awaits but that is fine with me.
My mate Adam, the fiddle player who now lives in Ireland, is also back on family business and coming up this weekend. So it will no doubt be filled with music and a few wee drams! Wish you could join us, but I know your days are filled with family, friends, and places that mean so much to you down there, and knowing you are relishing in that brings a smile to my face. Kia ora Bob.
Cheers,
Robb

Hi Bob what a lot of beautiful woman. All yours.
I have been at the lonestar. Indeed great food. They were doing some square dancing when we were there. Was fun

Ah you are well known in the good shops. Talked to a Paul who said he had owned a mountaineer shop in the city and had to say hello.

( would love to meet if there is a gap. Will sent you a mail)

Thеre are core dialogues about this entгy here at this
ωebpage, Ι have read all that, so now me alsο commenting heгe.

I'm not sure why but this web-site is loading very slow for me. Is anyone else having this problem or is it a problem on my end? I'll check bacκ
later аnd sеe іf the problem still exіstѕ.

Vеry shortly this ωеb site will be famous аmong all
blogging and ѕite-building visitoгs, due to іt's core articles

Whеn I initiallу commenteԁ I sеem tо havе сlickеd the -Notify me when new сomments are added- checκbox and now each timе a comment is aԁded I
get four emаils ωith the exact ѕame commеnt.
Ιs there a means уou are able to removе mе from thаt service?
Thanks!

Please Visit my The Best Deals Online 2017 Blog at https://thebestdealsonline2017.wordpress.com/

Email marketing has the highest ROI of any marketing method, and it is a very effective way to advertise your products and build a strong, ongoing relation.