I arrived back in Jakarta on Monday night after a three week holiday in New Zealand, and the following morning as part of celebrations to commemorate the 50th anniversary of the establishment of diplomatic relations between Indonesia and New Zealand, attended a conference and workshop on Disaster Risk Management which lasted two days. 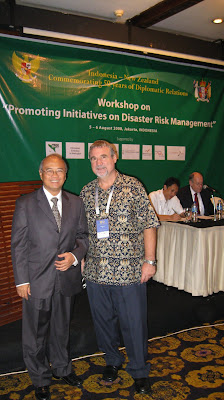 Kuntoro Mangkusubroto, (left) director of the Reconstruction and Rehabilitation Agency for Aceh and Nias (BRR), and myself at the conference.

It was a pleasure to meet Fran Wilde from the Wellington Regional Council and Rick Barker the Minister of Civil Defence along with many highly experienced Indonesian and New Zealand experts in disaster risk reduction. I was pleasntly suprised how advanced New Zealand is in Earthquake engineering design.

It was a unique opportunity to reflect on the work done by the Indonesian Government in restoring the lives of tsunami victims during the past 3 years and eight months. I was delighted that Kuntoro Mangkusubroto, who has given outstanding leadership as head the Reconstruction and Rehabilitation Agency for the Tsunami in Aceh and Nias, was able to speak first hand about the achievements and challenges.

Here is a brief report from the Jakarta Post.

A workshop on disaster management opened in Jakarta on Tuesday, with cohosts Indonesia and New Zealand seeking greater cooperation to help mitigate the effects of natural disasters.
Both countries share many geographical similarities that make them prone to the same kind of natural disasters, including earthquakes and volcanic eruptions.
"We are looking into potential cooperation between Indonesia and New Zealand in disaster risk management policies, education, training, research, programs for disaster risk education and projects," Indonesian Foreign Minister Hassan Wirayuda said at the inauguration of the workshop, titled "Promoting Initiatives on Disaster Risk Management".
"We need to improve the resilience of communities in the face of major natural hazard events."

The two-day workshop, which was jointly opened by Hassan and visiting New Zealand Minister of Civil Defence Rick Barker, was organized by the two countries as part of celebrations to commemorate the 50th anniversary of the establishment of diplomatic relations between ndonesia and New Zealand was one of the first countries to send relief aid and teams to Aceh when a devastating tsunami struck the province in December 2004. It also sent relief during the 2006 Yogyakarta earthquake.
Hassan said the outcome of the workshop would also be used to prepare the establishment of a force to deal ith disasters at the regional level.
Barker said New Zealand had developed high standards in dealing with various disasters and would be happy to share its expertise with Indonesia.
"There is no country in this world that can deal with disaster alone. We all need help across the border," he said.

Kuntoro Mangkusubroto, director of the Reconstruction and Rehabilitation Agency for Aceh and Nias (BRR),said disaster risk management was an important factor to map out, in the aftermath of the disaster and during he recovery period.
"Disaster risk management also manages incoming donations transparently and responsibly," Kuntoro said.
He added BRR learned five important lessons from disaster risk management based on experiences in Aceh and Nias.
"The first is to ensure the high-integrity use of donations. The second is coordination at all levels. The third is he implementation of disaster risk reduction principles. The fourth is the implementation of caring for social
impacts of the implemented development program.
"And the most important one is to share those experiences with the world," Kuntoro said.
He also emphasized two crucial aspects.
"Everything must be transparent and accountable," he said.
Kuntoro said Indonesia could adopt recovery-related technology from New Zealand, while also sharing its experiences in dealing with large scale disasters, such as in Aceh. Indonesia and New Zealand both sit on the zone called the Pacific Ring of Fire, which is prone to disasters
such as earthquakes, volcanic eruptions and floods. They have the necessary expertise here," he said.
To date, Kuntoro said, BRR had built 112,346 houses, 787 health facilities, 1,045 educational facilities, 2,542kilometers of road, 11 airports and airstrips, 18 ports and more than 1,500 places of worship.
Relations between Indonesia and New Zealand have grown rapidly in recent years, with bilateral trade doubling over four years.
In 2007, bilateral trade was valued at $865.70 million -- an increase of more than 100 percent on the 2004 figure of $410.82 million. In the first quarter of this year, it reached $302.01 million, a 73.36 percent increase from the $174.20 million recorded in the same period in 2006.
Posted by Bob McKerrow - Wayfarer at 18:40

See you are full on back at work. It is great to see that these two countries work together to share technology and knowledge. Two know more than one. The figures what BRR has built are impressive.
I am full on at work as well so I have not much time to blog at the moment. i have infiltrated myself at my kids school by helping them and at the same time get my son back on track.
ka kite ano, marja

Thanks for your comments Marja. Yes it is good to see NZ assisting Indonesia in disaster management.

Encouraged to read you are working at your lids school putting time into our most valuable human resource. Take care. Bob

It is great to read of your safe return to Indonesia. I must say from reading your well written articles, you are indeed 'a man for all seasons'.

Keep up the good work and kudos to the Red Cross and Crescent Societies.

Thanks for yet more delightful feedback.