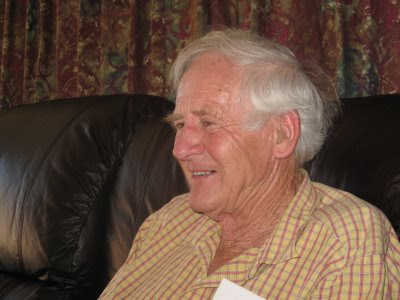 I had dinner 2 weeks ago with Ed Cotter before leaving New Zealand. At 81, I would describe him as one of New Zealand's most remarkable men. Why ? Because of his long and active involvement in New Zealand and overseas mountaineering, adventure tourism, and the fact that he has inspired so many young New Zealanders to head to the outdoors. His own son, Guy is one of the world's leading mountaineers and has climbed Everest five times.

Ed Cotter climbed with Sir Ed Hillary in the Himalayas in 1951 and later pioneered adventure tourism in the 1950s in Fiordland. Ed told me how earlier this year he trekked up to Mt. Everest Base Camp. He was 81 years old. While trekking around base camp, some physiologists from Otago Univeristy studying how people acclimatisd to altitude aked Ed if the could they could test him. They later told him he acclimatised better than most young people.

In 1951 a New Zealand Alpine Club party of Edmund Hillary, George Lowe, Ed Cotter and Earle Riddiford climbed in the Garwhal Himalaya. Ed showed how strong and well acclimatised when he and Earl Riidiford cimbed Mukesh Parbat, a first ascent for Ed Cotter.

His climbing career saw some important first ascents in New Zealand the most famous being Maximilian Ridge of Elie de Beaumont with Ed Hillary, George Lowe and Earle Riddiford.

In 1990 when I was head of DoC at Franz Josef, in charge of the Westland National Park, I employed Ed Cotter to run the Glacier Guiding business for five months between concessions lapsing. I got close to Ed who was then 64. We did a climb of Mt. McFettrick together with Mike Browne and Chris Jillet. 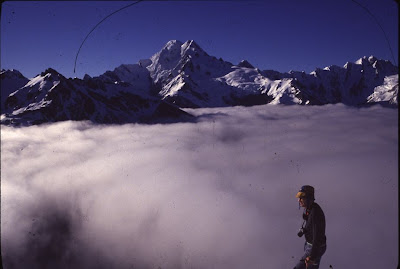 Thirty years after Ed Cotter climbed the Maximilian Ridge of Elie de Beaumont with Ed Hillary, George Lowe and Earle Riddiford, I took him back to climb a peak called Mt. McFettrick. From here, Ed looks across at the Maximilian Ridge of Elie de Beaumont, the long ridge on the left.
A member of the Canterbury Mountaineering Club for over 60 years, Ed has climbed extensively throughout the Southern Alps of the South Island. 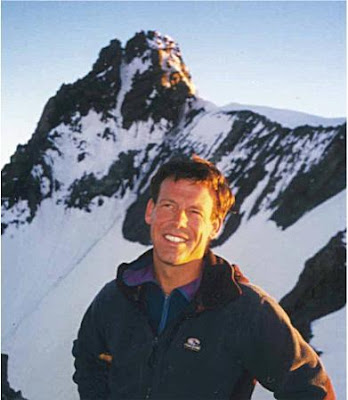 Guy Cotter, the son of Ed Cotter. This world leading mountain guide has climbed Mt. Everest five times and has the same quiet and modest peronality of his Father.

A few years back he played a prominent part in a documentary called Aspiring which is an evocative documentary about art, mountains and creativity which builds to a surprising end.

Hollyford Track Guided Walks started life back in the 1940's when Davey Gunn opened up the track for guided walks. The walk was further developed by one of Davey Gunn's assistants, Ed Cotter.

In 1959 the Hollyford Valley was incorporated into the Fiordland National Park and in the mid sixties Ed Cotter introduced boating to the walk itinerary.

Es Cotter played a key role at the funeral for Sir Ed Hillary when New Zealand's mountaineers farewelled him with the same alpine guard of honour they used for his hero's welcome home from Mt Everest in 1953 and for his wedding to Louise Rose later that year. Ed Cotter was at these three events and after Ed's death was sought after for interviews about Sir Ed. 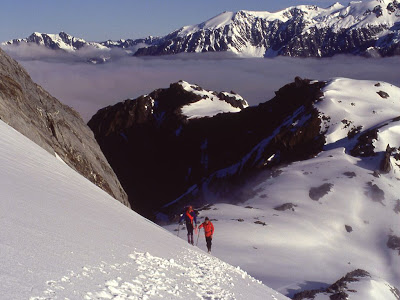 In 1998 when Ed Cotter turned up for my daughters 21st birthday party in Hokitika, one of my daughters offered him her room for the night. Ed Cotter, a humble man, never wanting to bother anyone, unrolled his sleeping bag on a woodpile in our woodshed, and went to sleep. I enjoyed bringing him a cup of tea in the morning and sitting on the woodpile with him.
In his late 70s he was still crossing the main divide on 3 and 4 day pass-hoping trips. Today, he still goes out on lomg trips in the Southern Alps. Ed Cotter looks after his friends and one in particular he visits regularly in England, is George Lowe who played such a key support role on the 1953 Everest expedition, by carry loads for the final camp. George suffers from Alzheimer's disease and Ed lends as much support as possible for an old friend. My five daughters who live in various parts of NZ, love it when Ed pops in for a cup of tea, or to stay a night with them. 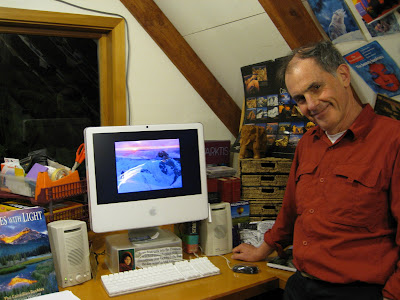 I first met Colin Monteath in Pioneer Hut in 1969. A few years later we were working in the professional mountain rescue team at Mt. Cook. Slowly I got to know this remarkable man with a flair for writing, photography and layout. In the late 1960s when living in Sydney he produced a rock climbing weekly called "Thrutch" and then he developed into a top class photographer. 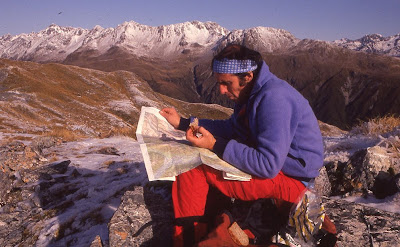 With nearly 100 wide-ranging assignments to Antarctica spanning 26 seasons since 1973 Colin has seen more of the Seventh Continent than almost any other New Zealander. For ten seasons ( 1973-83) he operated out of New Zealand's Scott Base as the Field Operations Officer helping to co-ordinate the logistic support for New Zealand's science programme. At that time he was also in charge of New Zealand's huskies and the training of the dog handlers. With survival and rescue team training under his control, Colin helped co-ordinate the recovery operation following the 1979 DC-10 crash near Mt Erebus. Colin acted as a guide for HRH Prince Edward during his Antarctic tour in 1982. On one of this three international science expeditions to the summit of the active volcano Erebus Colin made the first descent into the inner crater. He has also been involved in numerous new routes and first ascents on Antarctic peaks and was the first New Zealander to reach the highest peak in Antarctica, Vinson Massif. 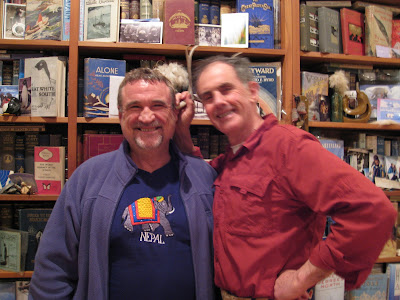 
Since 1983 Colin has worked as an expedition leader, lecturer and guide for various polar cruise and adventure companies including, in recent years, Quark Expeditions, Aurora Expeditions and Adventure Network International. In 1991 Colin was on board a Soviet nuclear powered icebreaker which made the first-ever surface vessel traverse of the Arctic Ocean via the North Pole as well as a transit of the NE Passage in Siberia. In 1993 he joined an international team which skied and dog sledged across the Greenland icecap.

Colin has been an active mountaineer for 30 years. He has climbed New Zealand's highest peak 13 times by most of its routes including the notorious Caroline face and the first winter ascent of the East Ridge. In 1974 Colin was a member of the Commonwealth Andean Expedition which made 19 new routes in Peru's Cordillera Vilcanota. 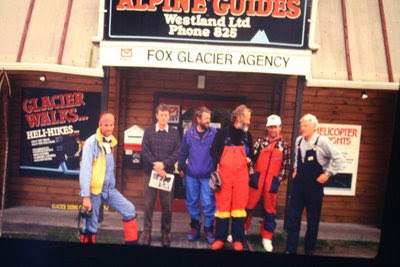 Before I left Christchurch in early August I had dinner with Colin, Betty and daughter Denali. Evenings at Colin and Betty's are always memorable as they meet so many people such as Wally Herbert, Chris Bonnington, the Dalai Lama, Will Steger, Lydia Bradey and a host of other climbers and explorers.

I count myself fortunate in being able to call Ed Cotter and Colin Monteath friends.
Posted by Bob McKerrow - Wayfarer at 21:01

Kia ora Bob,
I think you are a remarkable New Zealander as well.
I was very sorry to read about George Lowe. I really feel he is a very under rated figure in NZ mountaineering history. His sterling efforts to open up the Lhotse face were crucial to the success of that expedition, and he spent a lot of time high on the mountain. As a local Hastings lad he also cut his teeth early on in the Ruahines, so an obvious affinity there, and did some legandary tramps as well as early search and rescue. Are you aware of any biography of him? I know he was living in England.
The humbleness of these men you write about is really amazing, something of a Kiwi trait I guess, and I have to believe they feel the same way towards you Bob. Have a great week.
Rangimarie,
Robb

Yes it is sad about George Lowe. As you say he is an under rated Kiwi mountaineer. Thanks to people like George's wife, Ed Cotter and many friends, George is being well looked after. I recall reading about his early days in the Ruahines. The Tararuas and the Ruahines conditioned and tested many men and women for ranges beyong our shorelines. I had a few trips in the Tararuas when I was 16 and 17.

Ed Cotter is amazing. He and his son Guy are so unassuming and humble. Ed and I had more than a few drams of simgle malt when I was back home. He likes Glenmorangie (sp?).

Colin Monteath is also rfemarable in his experditions, photos. books and for the way he has nurtured many a young lass or lad. He has been a staunch friend to me.

Good to hear from you again.

There are truly a lot of remarkable people in NZ. Strong, persistent and people with a vision. It is great to read about them. This spirit probably brought NZ these olympics already 3 gold medals.
Hope all is well Ka kite ano Marja

I think NZ produces some tough people who are also gentle and swayed by beauty and truth. I feel the Dutch are close to us in strength and spirit and that why you have all integrated so well. I am writing another article on an another amazing Kiwi, a mountaineer and an Olympic Gold and Silver medalist. Have a relaxing Sunday. Bob

I had to revisit this blog several times to read the wealth of information provided. It deserved the star rating I gave it in my Google Reading List. I tip my hat off to you Bob for the way you keep us readers informed about the mountaineering feats of both twentieth Century and twenty-first Century mountaineers. Your archival accounts of the indelible marks and the inspirational legacy these mountaineers who have left this planet and Ed Cotter is no exception are laudable and worthy of the highest praise. Though dead their memories live on and we are the more richer because of them.

Wow! I'm amazed that his son, Guy Cotter has scaled Mt. Everest five times. One has to be truly a lover of mountains not only to climb them once but many times. Perhaps Guy is yet to find that something he is looking for up there beside the pleasure such climbing feats bring. Perhaps he'll tell if he has found what he is searcing for up there in Mt. Everest.

I'm delighted to read that on your return to your native island in August you dined with Ed Cotter before he passed away. Yet another success story for Ed Cotter because he surpassed the biblical years of three score years and ten at the time of his death. What a life of inspriration he has left behind for all those who climb mountains and for all those who don't physically climb mountains but understands the positive traits that drive such guys with nerves of steel.

Cheers and have a great day and night.
Paterika

I am learning from you every day. I have learnt from you how to reflect. I rarely go back and look at comments from old posts but today I found to comments from you that I find inspiring and encouraging. Many thanks

It is so good to read about Ed and Guy Cotter I worked with Ed in Invercargill in the 1970's,so would like to take this opportunity to say howdee to Ed,last time I saw Guy he was about 10 years old.