13 Months in Antarctica - a few photos, a few thoughts

The excitement of being selected to go to Antarctica when I was 21 years of age seems as vivid and stimulating as if it were yesterday. The first Antarctica sea ice I saw was from the window of the Super Constellation plane that flew us from Christchurch to Antarctica in October 1969. Photo: Bob McKerrow

It was May 1969 and I had to undergo three months training in Seismology, Geomagnetics, Earth Currents and micro-meteorology at the DSIR in Wellington and Christchurch, plus a one week training course on Mt. Ruapehu. Originally I was picked to be a science techician for one year at New Zealand's Scott Base, but a few months after arrived, I was offered a chance to go to the smallest wintering over station in Anartica, Vanda Station in the Wright Valley. There were four of us, two science technicians, Gary Lewis and myself, Tony Bromley,a meteorologist and a leader, Harold Lowe. Why we needed a leader, I'll never know. 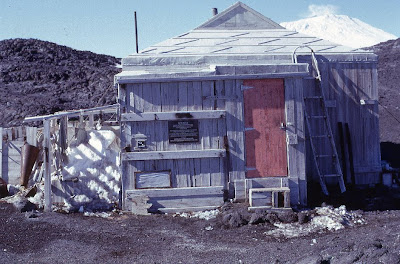 I had read about the great leader Ernest Shackleton before I went to Antarctica, and the joy when spending a day in his hut at Cape Royds, the base from his 1909 attempt on the South Pole, was overwhelming. Photo: Bob McKerrow

I was in charge of Seismology, earth currents and magetism which measured the changes of the earth's magnetic fields. When I moved to Vanda Station I carried on these projects but also took over measuring ice thickness on Lake Vanda and assisted with 3 hourly meteorological readings. 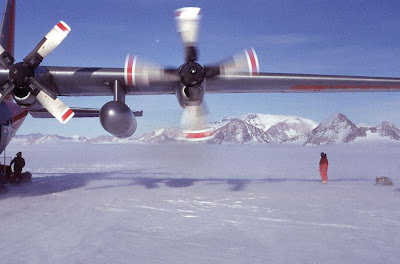 While at Scott Base I frequently accompanied field parties to their drop-off points and acted as a safety coordintor to ensure the field parties were carefully tracked and picked up at the correct destinations. This is a drop off on the head of the Robert Scott Glacier, about 130 km from the South Pole. Photo: Bob McKerrow 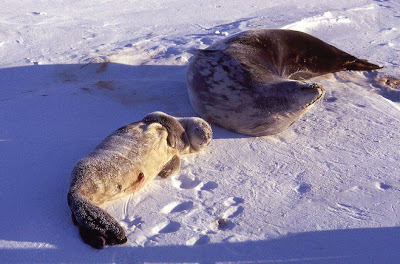 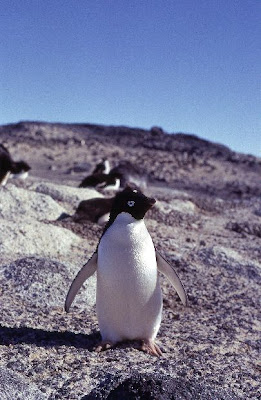 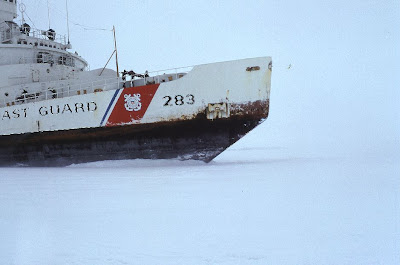 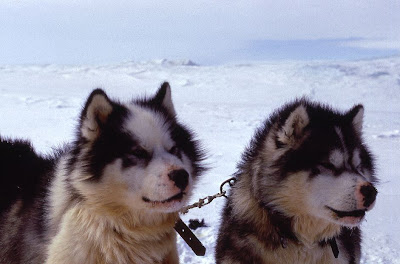 While at Scott Base, I used to assist our dog handlers Chris Knott to care for the dogs and we would often drive one team each after work for 3 or 4 hours. Sometimes in the weekend we would do long trips and overnight on the sea ice. Here are two of the lead dogs, that came from Greenland in 1966. Photo: Bob McKerrow 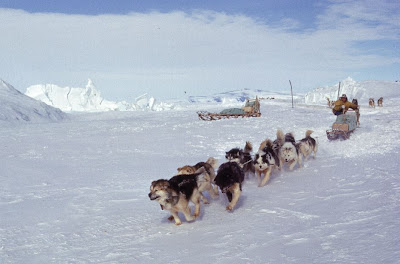 Chris Knott leaving on a trip with the dogs. Photo: Bob McKerrow 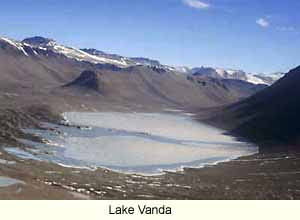 In mid-January 1970, I arrived at Lake Vanda where I spent 10 months as a science technician. Photo: Bob McKerrow 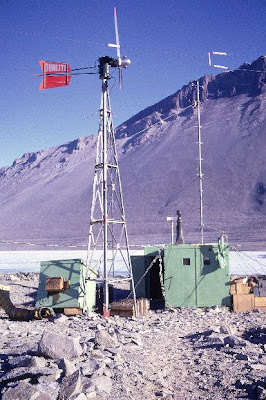 Our laboratory at Vanda station. For electricity we used a wind generator to charge our 12 volt Nicad batteries. When there was no wind, we would use a small Petter diesel generator. 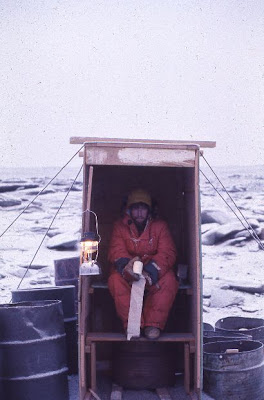 For hygiene purposes, our toilet at Vanda Station was outside. Here is Tony on the thunder-box. When it got below - 40 degrees Celcius. it was dangerous as ones backside would stick to the painted seat and rip skin off. To solve this problem we made polystyrene seat covers to protect our bums. Photo: Bob McKerrow 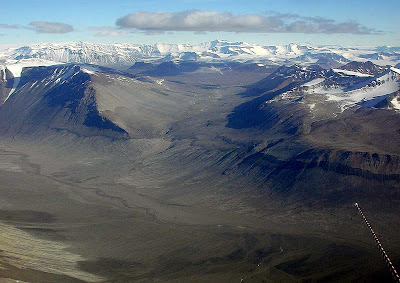 The Wright Valley, View north through Bull Pass into Victoria Valley. The small stream flowing west (into Lake Vanda) is the Onyx.
Photo: Antarctic Images Library, Josh Landis. Halfway up to the lower contact of the "Basement Sill" is a ledge of "Pecten Conglomerate" marking an old sea-level. 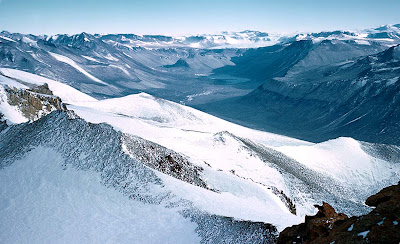 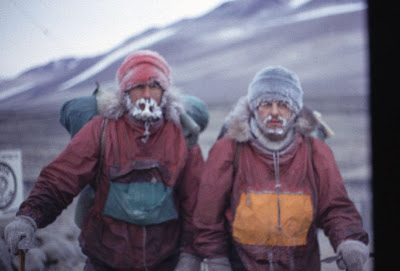 We did long trips on foot in the late Autumn, throughout the winter and early Spring.
Bob McKerrow left and Gary Lewis right. with frozen beards and faces. Photo: Bob McKerrow 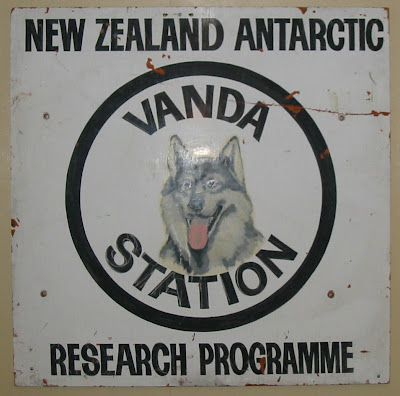 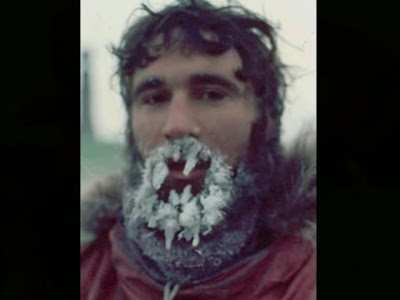 Bob McKerrow on his return to Vanda Station after a trip in early Autumn to the Dias meteorological station. A five hour return trip.


On reflection, the 13 months I spent in Antarctica were among the best of my life.
I remember vividly the last helicopter leaving us in early February and we knew it woulld be at least nine months before we saw anyone else.

At the end of the long winter's night where it was totally dark for four months, I looked in the mirror and saw myself for the first time in five months. I wrote in my diary " A man without a woman about him is a man without vanity."
A few weeks later while reflecting on the winter, I wrote " I turned 22 in March, it is now September. During the past five months I have got to know and understand my worst enemy, myself."


There was also the poem I wrote just before the long winter's night ended. 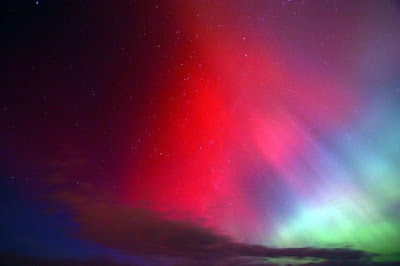 The Aurora Australialis
Posted by Bob McKerrow - Wayfarer at 01:39

Email ThisBlogThis!Share to TwitterShare to FacebookShare to Pinterest
Labels: Wintering over at Vanda Station - Antarctica 1970

As always thanks for sharing your adventures and amazing photos.

The photo of the aurora is amazing, they sure do bring life to a dark and starry sky and I love the imagery in your poem.

Ah you were already a poet at 21. Never have heard of an aurora before but it looks absolutely magical.
Amazing to spent such a long time in this white empty place with these beautiful animals. It sure would have affected your spirit a lot.
I would pass however when I read about taking a bath after 6 months and see all the frozen bits.
I am happy for you to have had this wonderful experience.
Also came to say goodbye I am leaving blogging for a long time but will visit you from time to time Take care and Aroha Marja

Always appreciate your thoughts. It was an amazing experience.

Sorry to read you are having a break from blogging. Take it easy.

Kia ora Bob,
Beautiful. A night in Shackleton's hut, how amazing. A place dripping with history and karma, and from the photos I have seen of the interior, looking as if they could walk in at any moment.
I have enjoyed this post in the company of a fine wee dram Bob, and raise my glass to you, your writing and poetry, fine photos, and for sharing them with us who care to read. Kia ora Bob, Za vashe za dorvye!
Rangimarie,
Robb

Thanks for your kind words and encouragement. It is good to share our experiences, emotions and dreams. I enjoy your postings Robb, as I find them poetic, romantic, and when required, blunt.

Bob: First of all, I enjoy reading your blog. You have put some excellent articles and photos on to it. Thank you. Second, I particularly want to say how much I appreciated your latest posting about your time in Antarctica. I was privileged to spend four months in Antarctica in 1979-80 as the DSIR's Antarctic Division ("Ant Div") Information Officer / Photographer (see, for example, http://www.nigel-roberts.info/photography.htm). Gary Lewis was the Vanda Station leader that summer. One of the many highlights of my time in Antarctica was the four days "R and R" that I spent at Vanda in early January 1980 -- doing such things as qualifying as a member in the Vanda Swimming Club (with its three rules for swimming in Lake Vanda: total immersion, total nudity, and total madness), breakfasting outdoors in the sunshine, hiking to Bull Pass and seeing its amazing wind-sculptured rocks, and photographing a geologist who came to Vanda after two months out in the "field" and was having a bath in the old tin tub (it's a picture very like yours of Gary Lewis!). I look forward to meeting you sometime. With best wishes, Nigel Roberts (Wellington)

Your name is familiar so I look forward to going to your website. It is always interesting to read about people's experiences at Vanda. Also pleased you met Gary Lewis; a very capable technician and a thoroughly decent man.

I never had a nude swim in Vanda but did put a tractor through very thin ice in early Autumn 1970 and spent a few hours swimming and diving under tying tow ropes so we could pull it out. That was enough for me.

Thanks for your feedback and hope to meet you some day. Take care. Bob

Thanks for commenting on my blog. Best wishes

Lake Vanda...Been there, done that... got the patch!

Continue to Perbiki his blog to get a good blog !!

Thank you for joining us. his article is very helpful

At this time I will share articles about health hopefully can be useful for everyone.