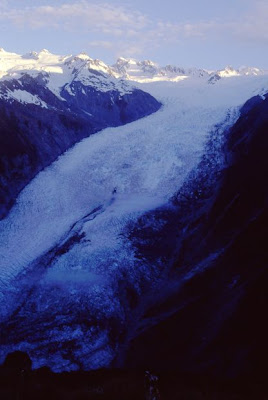 The Franz Josef Glacier, like all the other Glaciers in New Zealand, is rapidly shrinking. Photo: Bob McKerrow

To stand on a glaciers and feel its power as it grinds, flows, shakes and rests, is to feel power like no other. To see glacial mills, worn mountain sides and sweeping morraines is to observe the work of glaciers over millions of years. They are spiritual places and for me, places of pilgrimage.

I have been visiting the Tasman, the Fox, the Franz Josef, Brewster and Bonar Glaciers since 1966 and in just over 40 years they appear to have almost halved.

Most of New Zealand's glaciers are now the smallest they have been since records began - and they continue to shrink at a rapid rate.
The National Institute of Water and Atmospheric Research, which made the discovery, said global warming was the main culprit. 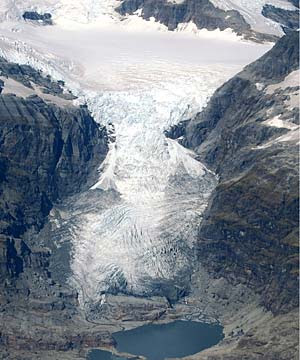 WARMING SIGN: Marion Glacier in Arawata Valley has recently withdrawn from its proglacial state. Most of New Zealand's glaciers are the smallest they've been since records began.Photo:Trevor Chinn

Between April last year and March this year, glaciers in the Southern Alps lost about 2.2 billion tonnes of permanent ice - the equivalent in weight to the top section of Mt Taranaki. It is the fourth highest annual loss since monitoring began 32 years ago. 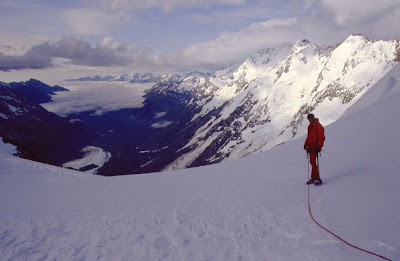 Graham Saddle which connects the Franz Josef Glacier, via the Rudolf Glacier, to the mighty Tasman Glacier. Photo: Bob McKerrow

The total ice for the glaciers now comprises an estimated 44.9 cubic kilometres - the lowest on record. The volume of ice dropped by 50 per cent during the last century.

Niwa principal scientist Jim Salinger said glaciers were fed by snow, but because of the La Nina weather system over New Zealand, more easterly winds and warmer than normal temperatures during the period, there was less snow in the Southern Alps and more snowmelt. 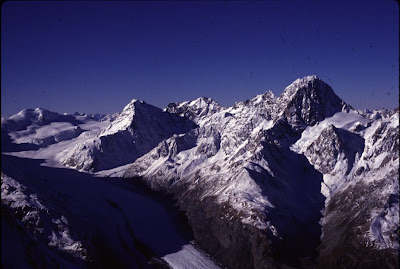 Peaks at the Head of the Tasman Glacier. Photo: Bob McKerrow

Dr Salinger said while the glaciers were sensitive to changes in wind and precipitation as well as temperature, global warming was a big factor in their shrinking.

"It's one of the clearest signs that our climate is warming and that [the shrinkage] is a definite physical response. To have that amount of melting you would have to reduce the precipitation at least by a half or more or warm a degree," he said. 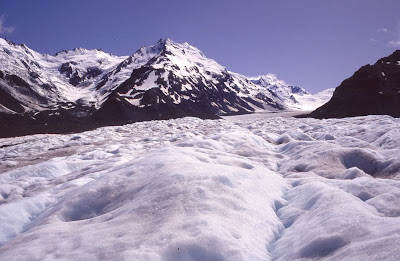 "They are definitely a sign of warming. There is no doubt about it. You get a very rapid loss of snow and ice and that's what's been happening."

"We know that precipitation has not gone down in the Southern Alps. In the last quarter of a century it's gone up. So to make them retreat you've got to have more melting, which is higher temperatures.

"This is certainly a definite sign of warming in the New Zealand area."

Niwa has surveyed 50 glaciers in the Southern Alps for the past 32 years, recording the height of the snowline at the end of each summer. On average the snowline this year was 130 metres above where it would need to be for the glaciers not to shrink, Dr Salinger said.

It was unlikely the glaciers would disappear entirely, as that would require a temperature rise of 7 degrees Celsius and no snow even at the top of our highest mountain, Mt Cook.

But they would continue to retreat. Another sign of warming were 12 glacial lakes, including ones at Marion Glacier and Tasman Glacier. 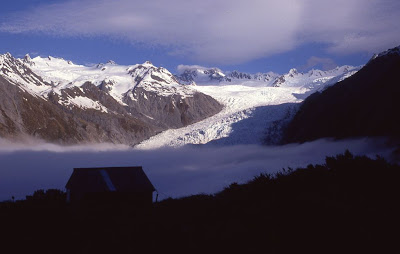 Looking from Castle Rocks Hut across the Franz Josef Glacier to the Southern Alps of New Zealand. Photo: Bob McKerrow

What moves me most is mountain landscapes and my dream of being a snow flake wafting from the sky. To fall on a mountain pass or a col, or even top of a mountain peak. To later to be part of a bergschrund, a snowy arete, a snow field, a neve, a glacier, a crevasse and in my anger and power, an avalanche. And then when I melt, that long trip down the river to the sea. The processes of snow, ice, glaciers, and mountain geology fascinate me and have drawn me back in awe time and time and time again. While reveling in the beauty of the mountains it reminds me our life on this earth is as ephemeral as a snowflake. 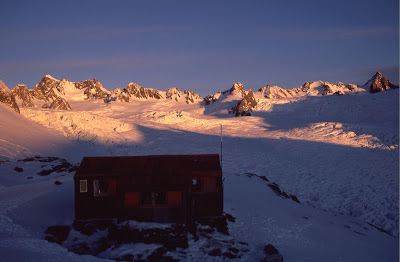 The Franz Josef Glacial neve taken from Almer Hut. The Southern Alps of New Zealand in the background. Photo: Bob McKerrow
I once could ski like the wind down mountainsides in New Zealand, France, Austria, Italy and Switzerland. I often repeat the runs in my mind. What keeps me traveling and working these days is the anticipation of seeing something new and the sense of awe evoked by architecture, landscapes, people and their cultures. To close my eyes and to look back at the history behind these special places, provides a sense of place and purpose in my life. Frequently the kaleidoscope of contrasts, from awe to awfulness, between pomp, power and poverty, and death; which I see almost daily in my work, wearies me greatly. Every year I return to New Zealand and visit the mountains to restore by soul, and rest my burnt body. 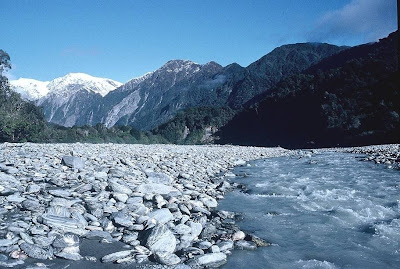 The Waiho River Valley which was covered by ice 15,000 years ago.


Special thanks to Tom Cardy of The Dominion Post to quote from his recent article.

Kia ora Bob,
Another battle looms. We humans simply must arrive at better ways of living with this earth.
I believe you will be a snow flake Bob, and no two snow flakes are alike. Your journies and writings, photos, and love of the mountains has helped inspire me to find my own voice. Kia ora.
Rangimarie,
Robb

Yeh, we havr to live with the mountains s like a lover earning their intimacy in a calm sigh.

Thanks for yr feedback.

How's my old sledding partner? It's been a few years since we last manhandled the qamotik through the fractured pack ice on the polar sea. I sent you previous comments however my blog account was not set-up so perhaps they did not go through..

I still live in Nunavut and have been keeping busy kiting, kayaking, sailing, fishing and going out on the land. My next trip is a sail up to NW Greenland to ice in for the winter and then do some dogsledding and kiting.

I have enjoyed reading your blogs and who knows our travels may allow our paths cross again.

Hey, my sledging partner, it has certainly been a few years since we last manhandled the qamotik through the fractured pack ice on the polar sea, to be precise, 22 years ago since we shared a sledge together at - 70 below.
What a wonderful surprise it was to get your message.

I never got any ptrevious comments from you on my blog, so there must have been a problem.

Delighted to learn you are still living on Nunavut and have been keeping busy kiting, kayaking, sailing, fishing and going out on the land. Your love of the Arctic and the Inuit will never change. How is the family ?

If you are looking for an experienced sailor to come to Greenland, let me know. Brent, you will never know how much I learned from you during those months on Baffin Island, then Ward Hund Island, and the trip to the North Pole. I learned economy of movement from you, and not to break into a sweat. I recall your Caribou anorak, polar bear trousers and beaver mitts, and the long harpoon you carried to check the thickness of the ice. Please try and contact me by email, which my re[ply will allow you to do.

Many memories flowed back last night after contact with you after 22 years.

Hello dear Bob
Keep on this good work!
I believe you will like my blog too!
Wish you a Good Day of Peace
Abraços from Portugal

Thanks for your comments

I had a look at your blog aand enjoyed the starins of Vivaldi.

Good brief and this mail helped me alot in my college assignement. Thank you on your information.

Opulently I agree but I dream the post should have more info then it has.

Good post and this mail helped me alot in my college assignement. Gratefulness you as your information.

Approvingly your article helped me truly much in my college assignment. Hats off to you dispatch, will look forward in behalf of more interrelated articles in a jiffy as its one of my pet issue to read.

I totally match with anything you have written.

Hey there! This is kind of off topic but I need some guidance from an established blog.
Is it difficult to set up your own blog? I'm not very techincal but I can figure things out pretty fast. I'm thinking about making my own
but I'm not sure where to begin. Do you have any ideas or suggestions? Many thanks

Also visit my page :: Diets That Work For Women

Great post! We will be linking to this particularly great
post on our site. Keep up the great writing.

I think that what you said made a bunch of sense.
But, what about this? what if you were to
create a killer title? I mean, I don't wish to tell you how to run your website, however suppose you added a post title that grabbed a person's attention?
I mean "Glaciers are spiritual places" is kinda plain. You ought to glance at Yahoo's home page and see how they create news headlines to get viewers to click. You might try adding a video or a picture or two to get people excited about everything've got to say.
Just my opinion, it might bring your website a little livelier.


Have a look at my web page ... Best Diet Patch