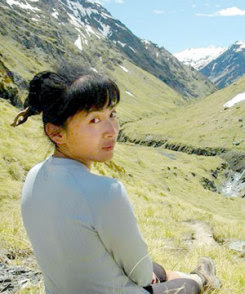 Irina Yun on an earlier trip.

UPDATE: 1 pm. 3 January 2009
The search for tramper Irina Yun, missing in Wanaka's Mt Aspiring National Park since New Year's Eve, has been suspended to ensure the safety of searchers.

Searchers put in a full day's work on Thursday but were kept back at base yesterday as a stormy weather system moved over the region.

With a clearance forecast for this morning search teams went in at first light, but were restricted to waiting at the base of the eastern side of the Cascade Saddle as cloud and rain "socked in" the western side.

A helicopter search team equipped with night vision equipment was also forced back due to poor visibility at 4am.

Search and Rescue coordinator Sergeant Aaron Nicholson decided to suspend the search late morning but said the weather would be monitored hourly and if a window of opportunity arose, searchers would return to the area.

Yesterday I got a call from my good friend Robin Judkins who was in Wanaka saying " the weather is terrible here with high winds and rain." My thoughts and prayers went out to Irina Yun, a young woman from Uzbekistan missing in Mount Aspiring National Park. Seachers say she would be "incredibly lucky" to survive three days of bad weather. 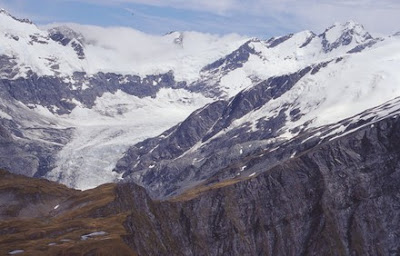 A view of Mount Aspiring from near Cascade Saddle. It's wild country up there where Irina is lost.

They hope to continue their search for Irina Yun, 36, this morning after stormy conditions hampered their efforts yesterday.

Why a young woman is travelling alone over Cascade Saddle puzzles me ? It is rugged terrain and with New Zealand's unpredictable weather, I would always travel with someone on this alpine crossing. The New Zealand Tramper says the following : The route is very slippery and hazardous in wet weather. 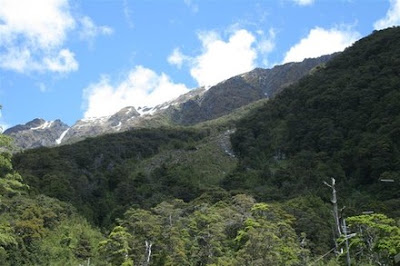 The route does not actually cross the saddle, but follows the rugged spur in the top centre of this photograph, leading to a pylon on the ridge. The route is very slippery and hazardous in wet weather.

Yun, an Aucklander of Uzbekistan descent, was tramping alone from the Aspiring Hut to the Dart Hut over the Cascade Saddle, a tough alpine tramping route near Mount Aspiring.

Yun, who has a young daughter, left the Aspiring Hut at 7am on New Year's Eve and was last seen near the Cascade Saddle at 9.30am.

She intended to reach the Dart Hut that day, but did not arrive.

Wanaka mountain guide Gary Dickson, who will join the search today, said Yun would be "incredibly lucky" to survive the bad weather on the route.

The trek was straightforward in fair weather but perilous in poor conditions, he said.

"Quite honestly, she has been through a fair bit of weather, so she would be incredibly lucky to get through all of that, but we do not give up hope and will do our best," Dickson said.

"You can get navigational difficulties, hypothermia or you can get picked up by the wind and blown off precipices. 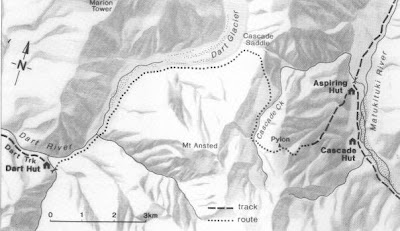 The route from Aspiring Hut to Dart Hut via Cascade Saddle.

"The area has some significant terrain hazards and has been the scene of fatal acci-dents in the past.

"We have grave concerns for her safety. The plan is to search a number of areas that we have identified from the map are worth revisiting and areas where she may have got into trouble." 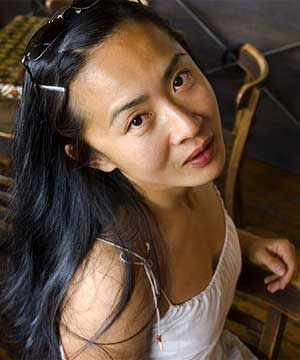 A helicopter crew and 11 ground searchers did not find Yun on Thursday, and the search was on hold yesterday because of stormy weather.Constable Mike Johnston, of Wanaka, said there was heavy rain in the area and rivers had risen considerably.

She had a walking pole and small packThe entry in her Facebook social networking website on December 28 said: "Irina is in Wanaka and feeling great :)."

Yun is a keen tramper, rock climber and snowboarder.

Johnston said Yun had spent time in the national park before and was well-equipped, with food and good-quality gear. 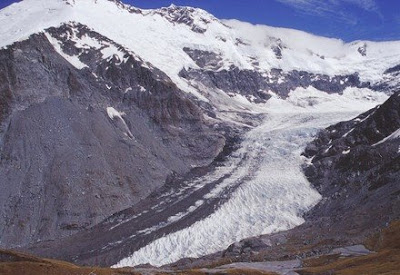 The Dart Glacier that can be seen when descending from Cascade Saddle.She had planned to walk the Routeburn Track from Monday.

Johnston said the Cascade Saddle route had areas that were regularly washed away by rain and snow.

"You have to have your wits about you in that environment to make sure you're following the route," he said.

"In bad weather, you have to be even more on to it."

MetService forecaster Ian Miller said heavy rain in the Mount Aspiring area was expected to ease to showers last night, and severe gales around the mountain would ease.

The freezing level would drop overnight, he said, with snow falling to about 1500m.

The Department of Conservation (DOC) website says it takes about nine hours to cross the pass, which runs between the Aspiring Hut in the Matukituki Valley to the Dart Hut on the Rees-Dart track. 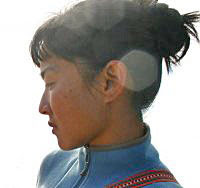 Several streams must be forded on the route, and the DOC website warns that water levels can rise quickly during rain.

Having trekked and climb3ed extensively in both the Matukituki and Dart valleys and crossed Cascade Saddle, I hope and pray Irina survives. Uzbeks are tough people. In addition she is a yoga aficionado and an experienced rock climber and tramper, so she's likely to have inner resources that could pull her through some days of bad weather, if she was able to make a shelter and protect herself from the elements. Let's pray for her survival.

Thanks to Christchurch Press and NZ Tramper for permission to use their material.
Posted by Bob McKerrow - Wayfarer at 09:08

Please keep me posted on this. I do hope she is safe and sound when they find her. My thoughts each day are on Robb who is on a one week trek through the mountains. I eagerly await his return. Shall be checking on his blog later.

The cold winds from the Eastern seaboard of the USA have impacted on our weather here in Barbados. The temperatures have dropped especially at night forcing us to look for warmer clothing. Much rain continues to fall each day.

Continue to enjoy your day

I sincerely hope she is alive. Will keep you posted.. I am sure Robb will be fine.