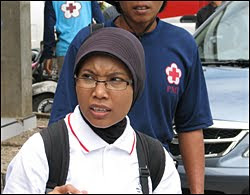 She is only 25 years old, but Umi Alfiyah is already a veteran of major disasters. As a former volunteer with the Indonesian Red Cross (PMI), and now as a staff member, she responded after the 2004 tsunami in Aceh, the 2006 earthquake in Yogyakarta, and now, the earthquake in West Sumatra . Photo: Kathy Mueller


Yesterday morning Friday 23 Oct, I went for my first morning walk in 24 days. I felt like a school boy stealing from the teachers drawer. As guilty as sin. Should I not be writing appeals for help, negotiating for more helicopters and volunteers ? No, my body and brain need a rest.My legs were stiff and my back aching from sitting in front of a screen, jumping in and out of helicopters and walking across the uneven surface of landslides. It was the first time I have done something for myself. As I walked I thought of all those selfless people I have worked with since 30 September. Pak Irman head of the PMI operation whose grand daughter used to phone daily from Jakarta begging him to come back. Wayne our ops manager whose been working 24/7 handling a complex operation. Kathy Mueller from the Canadian Red Cross who has been out there daily listening and recording the stories of affected families, volunteers and staff. her latest article I paste below. Matteo from the Italian Red Cross who came with his team and erected 3 base camps for 200 volunteers so they could get some rest and a shower after attending to the dead with dignity, administering first aid, distributing relief items, counselling grieving children and reuniting families. Vera, Putu, Qasim. Jamie. Ian, Amara who work for me and John and Tucky the helicopter pilots. The list goes on and on. Their stories need to be told. Umi in one of my many PMI heroes.

She is only 25 years old, but Umi Alfiyah is already a veteran of major disasters. As a former volunteer with the Indonesian Red Cross (PMI), and now as a staff member, she responded after the 2004 tsunami in Aceh, the 2006 earthquake in Yogyakarta, and now, the earthquake in West Sumatra. When disaster strikes, it’s her job to reconnect people who have lost contact.

“We have had around 40 phone calls from people outside West Sumatra who haven’t been able to reach their families in Padang and Pariaman. People are scared. They don’t know what’s happened to their relatives,” she says.

Alfi, as she prefers to be called, is heading up the Restoring Family Links (RFL) unit as part of PMI’s emergency response to the earthquake. Their efforts to help people find each other include the launching of a national hotline. Friends and family across the country and overseas can call to learn the whereabouts of their loved ones. They will also take satellite phones into the more remote areas where cell phone service may not be reliable. 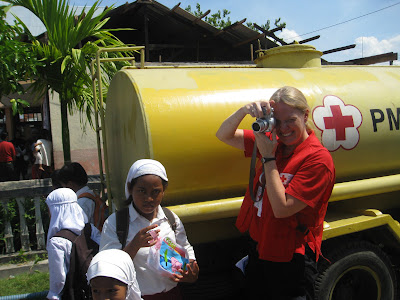 When a call does come in, Alfi and her team head out to visit the missing person’s last known address. They will keep visiting until the person is located.

“We had one call from a man in Jakarta,” says Alfi. “He hadn’t been able to reach his brother in Padang City. He had been calling and calling for days but there wasn’t any answer. We took down as much detail as we could and then visited the brother’s house.

“He was there, but hadn’t been able to call out. We gave him a mobile phone and the two brothers talked. It was very emotional. They were both crying. Four days is a long time not to know if your brother is alive.”

It reconfirms that for most people, insecurity is the worst situation to be in. Survivors of a disaster can better handle grief, losses and rebuilding their lives, once they know what has happened and what their options are.

Despite the challenges of working in a disaster zone, Alfi does not entertain any thoughts of giving it up. “It can be upsetting because a lot of people are buried under landslides and collapsed houses. We don’t always have good news for people. But I really enjoy the job, especially when we do reunite families. Other PMI programmes provide material goods. We look after people’s emotional needs. We find their family.”

Alfi has been coordinator of the RFL unit for the past three years, but her connection to PMI began years earlier in high school. During the big earthquake in Yogyakarta in 2006, her own house was damaged, yet she still came straight into work.

“We had more than 200 requests to find family members. We also worked with the government to help with the identification of bodies. It was a very emotional time, but it really showed how valuable a service this is. I have been with the Red Cross for so long now, I can’t imagine working anywhere else.” Thanks to Kathy Mueller of the Canadian Red Cross who wrote this article.

Good to hear you took a walk Bob. We can only help others by looking after ourselves first!

Hope you had another beer too! ;)

>...Four days is a long time not to know if your brother is alive.”

Again there must be hundreds in this awful situation. My heart goes out to them.

Quite a nice Lab. weekend Sat. here, but the westerly is here on schedule. Meanwhile I'm glued at my desk building web site pages.

Hi Donald
I forgot it was Labour weekend. I used love climbing at that time of year but Easter usually brought better weather.

Thanks for your visit.

>I forgot it was Labour weekend. I used love climbing at that time of year but Easter usually brought better weather.

Yes! Sitting here today recalling some great adventures and reflecting how life changes, and that I'm lucky enough body wise to still do it [so why am I sitting here!].

Ahh... the memories, but they include too many now passed on.

Nostalgia is not what it used to be either!

And as always: keep up the good work

i was reflecting on the best Labour weekend trip I did in 1969 with Keith McIvor. We drobe from Dunedin and did the Otira face of Rolleston and then went on and traversed Phillistine. We talk of memories, but perhaps Sommerset Maughn summed it up well.

“What makes old age hard to bear is not the failing of one's faculties, mental and physical, but the burden of one's memories.”

If your memories are positive I feel we will not carry his burden.

>If your memories are positive I feel we will not carry his burden.

Yes, indeed! It could be too, that when there are scars they may not heal, but the work-around to me is to make the present positive too.

My over-all thoughts on Lab. weekend trips are that I survived some of them, as for whatever reasons strange things used to happen to me for awhile.

I tend not to dwell on some of the experiences, such as a few us being the last to see Pete G and Doug W. at Unwin prior to their disappearance on the Caroline. We [mostly Dunedin'ites] ended up at Muellar totally unable to leave the hut, knowing in our hearts they were goners in the same storm. I started seriously in the hills in '67 so like Keith they were ahead of me in terms of experience. Subsequently I got to know Pete's mum a little bit to know her other losses, then his sister very well, and she married my closest friend, but he passed on soon after. The whole experience making me mindful that some families seem to get more than the normal lot of tragedies. A trend that is probably happening all around your Red Cross work places.

From Rolleston to Philistine was a grand effort btw! A lovely area.

Hi Bob Thanks for reporting Happy you had your well deserved walk. You are all a source of inspiration. If only all of us could be so brave, hardworking and improving and helping the world.
and what a great job to bring people back together. Living far away from my family I know how important communication is in difficult times.

I emjoyed my walk over the weekend and to spend a little time with the family.

I travel back to West Sumatra early tomorrow to support our dedicated team there. Tksd for your support.

Good on you mate, its a grand and worthy adventure you are embarked on in the world of humanitariansim.

Although the views aren't so good and the physical endorphins not pumping so hard, you have to grit your teeth to succeed.

Take care aye and look after yourself, your wife and your kids!

Its pouring down outside in Padang and I am worried about the people living in the high hills which were scarred by landslides after the earthquake. With such heavy rain I am afraid more landslides might occur.

Jamie thanks for your feedback.

Kia ora Bob,
Hope the rains hold off, and those people catch a break.
I would imagine the work that Umi does she actually gets very few "victories", but how important would they be! I am sure she could teach all a few lessons in dogged persistence, patience, and faith.
Kia kaha Bob.
Cheers,
Robb

Just got back from a 4 hour fielkd monitoring trip in the high mountainour region of Aga, Western Sumatra. It rained heavily last night and people are worried about more landslides. We are supporting 2000 people in a camp which is out of harms way. I will post a story on this soon.

You are right, Umi gets few victories, but when they come, they are so sweet.

Hey! I just noticed one other message in one other weblog that looked like this.
How have you learnt all these items? That’s one
cool post.

my homepage ... trying to conceive tips