You can never recapture 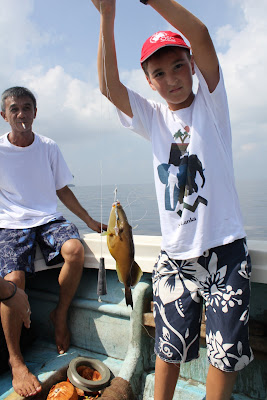 Ablai caught his first fish today, a 'trigger fish.'  " It tastes like chicken,' says John. Ablai is 11 and it was his first fishing trip and I was reminded of a poem I wrote (above) some years back about how you can never recapure many things you did for the first time. It was such a joy watching him hook, haul in the line, and see the first and only fish he has caught. 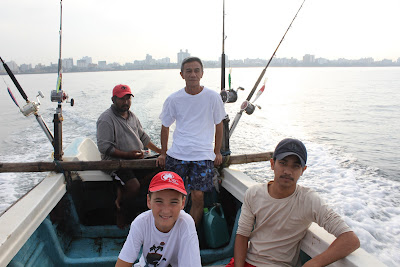 The team 'The skipper' rear left and John Kao. In the front Ablai, left and Jason Kao. 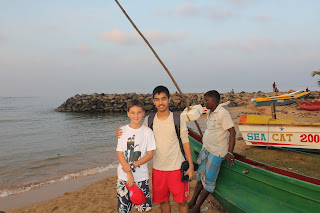 Ablai McKerrow (l) and Jason Kao (r) before starting on the trip today. 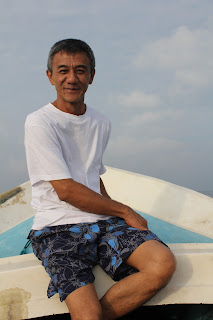 Master diver and marine expert John Kao who took us on the trip today. John has been diving professionally most of his life, apart for some years in the early 90s when he was a field officer for the IFRC for 3 years with the Red Cross Internally Displaced Persons  programme during the war in the north of Sri Lanka.. 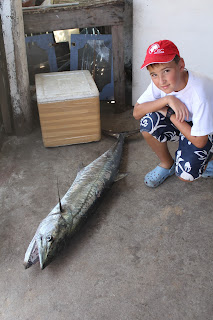 The fish Ablai caught wasn't quite this big, as he examines the one caught by the other boat that we met at sea. 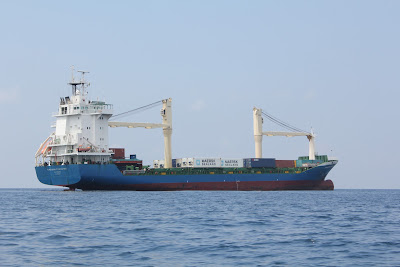 Quite a few container ships were waiting off shore, hoping to unload in Colombo Port. 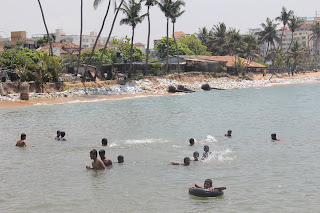 While the rich and famous patronise the more up market beaches south of Colombo, ordinary families living in Colombo use this beach near Hotel Baech Wadia. where we started and ended outr trip today. 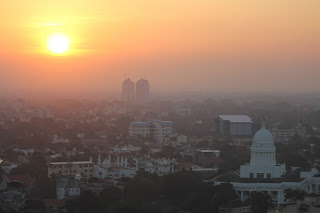 This morning we had a beautiful dawn and tomorrow it is Poya day, full moon and the
Navam Maha Perahera festival which  starts at the Gangarama temple, two minutes walk from our  apartment..

The streets of Colombo transform under the weight of 100 colourful elephants during tomorrow's full moon. Since 1979, the Navam Maha Perahera has annually attracted more than a million spectators to the Gangaramaya Temple, at Hunupitiya by picturesque Beira Lake.


The event usually has as many as 1000 performers. The fearsome kas karayas inaugurate the processions by cracking their whips in the air, while schoolchildren scurry behind, carrying colourful flags.

Plenty of noise is contributed by percussion bands, conch shell blowers, stilt-walkers, flautists and drummers, but the real guests of honour are the elephants, visiting from all over the island.

So today's holiday was so enjoyable and tomorrow promises to me a colourful one, with lots of noise, excitement and epitomises what I like about Buddhism..
Posted by Bob McKerrow - Wayfarer at 05:02

It bought back memories of the first fish my son Dougal caught.

You're so right... these things are so special - it's hard to know 'tho, them or us more!? Ultimately them I suspect, when they're older.

And crumbs he's off to Uni. in Dunedin tomorrow. A new passage begins!

You pose a good question, "them or us more ?" I am sure both get similar joys at the time, but who can measure impact or memories ?

One of my daughters graduated from otago and she enjoyed her time gretaly Good luck to your son.