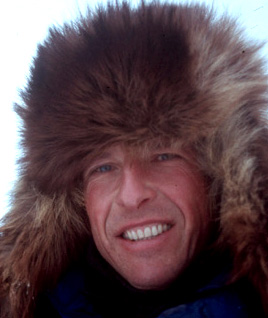 An unassuming 53 year old Canadian must be the world' leading polar traveller having been on over 50 expeditions to the Arctic,  17 trips to the North Pole and has also skiied to the South Pole.
I have known Richard since 1985 when we did a 1500 miles ski trip in the Arctic, and again in 1986 we were members of an unsupported expedition to the North Pole.

We met in Minneapolis/St. Paul in May this year and I had a chance to catch up with him, and talk about his travels during the past 25 years.

"One of the best parts about any polar expedition is walking where I have never been before and in some areas where no one (or at least very few) people have gone before. The Arctic ocean is special because every day is a new unknown challenge. The only thing that is sure each day is the unknown. Though I am now a bit tired of it."

Richard, lives with his wife, Josée Auclair and their two boys, Tessum, age 22 and Nansen, age 20 near Alcove, Quebec. Richard started skiing at the age of two, he became a member of Canada's National Cross Country Ski Team in 1977. He retired in 1985 with twenty national titles. Richard has a bachelor degree in mechanical engineer from the University of Vermont. Richard has co-authored two books about his adventures.

Richard, together with wife, Josée, operate “Arctic Watch Lodge”, the world’s most northerly lodge located on Somerset Island in Nunavut. Arctic Watch is unique place to see arctic wildlife, including the best place in the world for beluga whales. 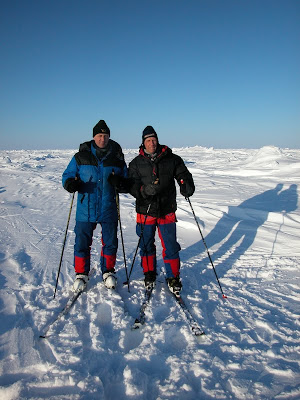 
Richard has trekked from land to the geographic North Pole seven times, more than anyone in history. He has spent an unprecedented amount of time travelling on the Arctic Ocean, more than 600 days and nights.

Richard and Josée have designed and developed a line of speciality polar equipment and food, including boots, ski bindings, sleds and clothing. His web site is http://www.weberarctic.ca

2010 North Pole
Richard led a four-man team from Ellesmere Island to the Geographic North Pole with one re-supply. The team set a speed record of 41 days. Richard’s son Tessum becomes the youngest person to ski to the North Pole.

2008-2009 South Pole Quest
Richard led a three-man team, unsupported, from Hercules Inlet to the Geographic South Pole, a distance of 1130 kilometres in 33 days, 23 hours and 55 minutes. This is a world record, more than 5 days faster than the previous record. 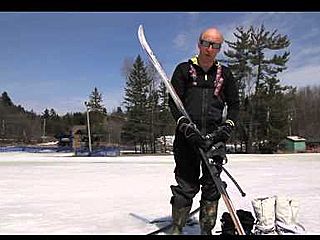 Richard near his home in Quebec.

1988 Soviet Canadian Polar Bridge Expedition
Richard was Canadian team leader of this Soviet Canadian transpolar ski expedition that crossed 1800 kilometres of Arctic Ocean from Northern Siberia to Ellesmere Island National Park Reserve in Canada, via the North Pole. Richard became the first person to reach the Pole from both sides - Canada and Russia. First surface crossing of the Arctic Ocean on skis 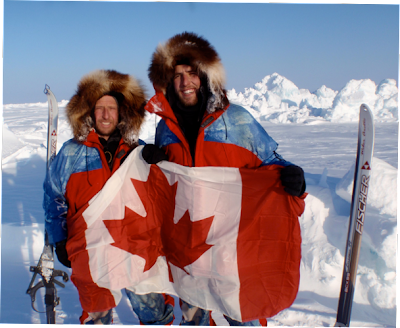 Richard (l)  at the North Pole with one of his many clients.

Arctic Watch Lodge
In 2000 Richard Weber and Josée Auclair purchased the bankrupt whale watching camp, Arctic Watch located in Cunningham Inlet on Somerset Island, Nunavut. Richard and Josée updated the facilities and equipment. Arctic Watch is entering its 12th year of operation as the world’s most northerly fly-in lodge. Arctic Watch is unique as it is the only place in the world where a tourist can visit a remote arctic setting and be comfortably accommodated. It is presently one of the largest tourist operations in Nunavut. A visit to Arctic Watch is an all-encompassing arctic safari. Visitors to Arctic Watch see thousands of beluga whales, muskox, arctic foxes, birds, and archaeological sites. They can travel the land and water by foot, sea kayak, raft, mountain bike, and ATV. (All terrain vehicle). Guests can climb mountains, hike through canyons, across tundra, and around waterfalls. Experience immense vistas, and 24 hour sunlight. The accommodations are the most comfortable remote facilities in the High Arctic. The web site is http://www.arcticwatch.ca/ 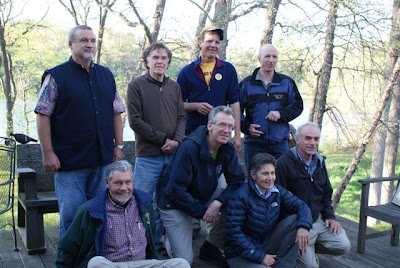 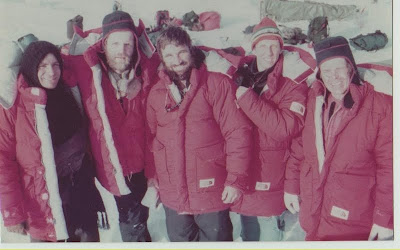 The 1985 training trip for the North Pole the following year. L to R. Bob Mantell, Paul Schurke, Bob McKerrow, Richard Weber and Will Steger
Posted by Bob McKerrow - Wayfarer at 02:39

Very impressive all these expeditions. That arctic watch lodge is a great initiative and sounds very interesting to me.

Yes Marja, the Arctic Watch Lodge is a wonderful venture that gives people a high Arctic experience in the hands of the world's most experienced Arctic explorer.

Wow! I enjoyed reading this article. I like reading about icy places especially places I can only visit in my dreams. I shall be returning to Canada this year Quebec and Ontario and while there will apply for my NZ Visa no NZ Embassy is in Barbados only the Australian Embassy.

Thanks Bob for sharing interesting article and for posting the link I shall visit sometime soon.

A pleasure to hear from you again. So it's good to know we both have a love of icy places. Richard weber is a truly amazing arctic traveller.

I hope you get your NZ visa OK. Look forward to seeing you in my homeland.

Bob,
Thank you for the nice blog. It was really great to see you last month in Minnesota.

The chap is absolutely just, and there is no question.

Hi there to all, how is everything, I think every one is getting more from this web
page, and your views are nice in favor of new users.

Look into my web blog http://www.nexopia.com/

Great post. I was checking continuously this blog and I'm impressed! Very helpful info specially the last part :) I care for such info a lot. I was looking for this certain information for a very long time. Thank you and good luck.

Stop by my homepage phallosan online

My partner and I stumbled over here different web address and thought I should check things out.
I like what I see so now i am following you. Look forward to looking at
your web page yet again.

This design is wicked! You most certainly know how to
keep a reader amused. Between your wit and your videos,
I was almost moved to start my own blog (well, almost.
..HaHa!) Wonderful job. I really enjoyed what you
had to say, and more than that, how you presented it.
Too cool!