Can two Giants lead their team to the final in the World Twenty20 cricket ?


I live in Sri Lanka and will be off tomorrow with my boys to watch a warm-up match between Australia and New Zealand. The atmosphere in Colombo is electrifying with parades, poster, banners and hoardings promoting the World  Twenty20 champs. I cannot even stab at a possible winner, and was impressed by this article written by Harsha Bhogle who unwraps the mysteries to playing cricket in this part of the world and explains how this tournament will be on a level playing field.

There was a time when the subcontinent was mystery, assigned dark and exotic shades. It was the land of the unknown, rendered even more so by inventive prose. You got the feeling that visiting teams were waiting for the unexpected, that, peculiarly, they expected it, and were almost ready to succumb to it. Either they weren't aware of how to combat the conditions or, more likely, they were just unwilling to. A tour to this part of the world brought out the best in cricket writers, rarely in cricketers. 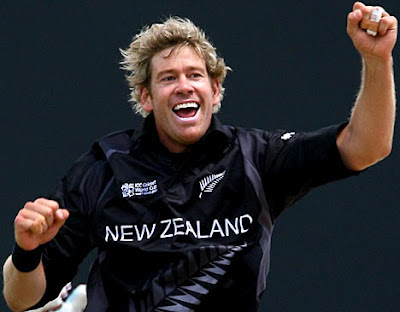 Jacob Oram one of the giant NZ cricketers.

A couple of days ago I saw two giant New Zealanders, they of the land that had seemed beyond the unknown to us, understand the subcontinent like it was their own. And it struck me that the mystique had gone. Jacob Oram and James Franklin seemed so at ease that they might have been bowling at Eden Park, indeed that the Feroz Shah Kotla might have been as familiar to them as Eden Park was. The world had shrunk and India was now the playground of the cricket world. Two New Zealanders had beaten India playing an Indian game. 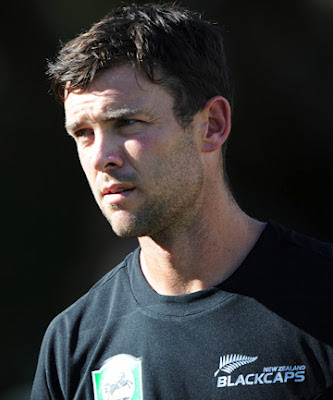 And so, as the World Twenty20 begins across the Palk Strait, I wonder if knowledge of local conditions is a qualification anymore; whether slow bowlers who take the pace off the ball speak only in our accents. Wristy players with exotic shots now hail from Ireland, mystery spinners from Trinidad, and even those from Dunedin and Hobart are increasingly at home in Pallekele and Visakhapatnam.

And so this is as open a World T20 as any you will see. You could argue, and you would argue fairly, that the smaller a match the more open it is anyway, but in earlier editions the format was still unfamiliar and there were times when the slow, low pitches of the subcontinent could negate teams like New Zealand, South Africa and England. Not anymore. The IPL is now five years old, the Big Bash has gathered steam, there is excitement around England's T20, and little leagues have sprung up in Bangladesh and Sri Lanka. As cuisines go global, so does short-form cricket.

The groups don't matter anymore, and the rankings still have insufficient data to make for fair and informed assessments. As Australia have shown, the number ten ranking can be made to look both correct and ridiculous in the space of two days. Look at their matches against Pakistan. In the 2010 World Twenty20 semi-final they got 80 in six overs; recently they struggled to make that many in 20 overs, and a couple of days later they bowled Pakistan out for 74. Any of those days could have been a final, so predictions will be foolhardy.

The news coming out of Sri Lanka is that the pitches have a bit of the spice normally associated with the fish curries there; that the ball is allowed a decent carry in Pallekele, and that spinners of doubtful pedigree will have to do more than just turn a doorknob to get help from the pitches

That is especially so because the news coming out of Sri Lanka is that the pitches have a bit of the spice normally associated with the fish curries there; that the ball is allowed a decent carry in Pallekele, and that spinners of doubtful pedigree will have to do more than just turn a door knob to get help from the pitches. I hope that assessment is right because good pitches will favour better cricketers. I also hope that boundary ropes are placed a respectable distance away from the batsman.

The unpredictability makes this edition even more alluring. West Indies, once the home of fast bowling, could play with Samuel Badree, Sunil Narine, Marlon Samuels and Darren Sammy (three of them slow, one just going past that definition); Sri Lanka could throw up another couple of unorthodox sensations to go with Lasith Malinga and Ajantha Mendis (have been told to keep an eye out for Dilshan Munaweera and Akila Dananjaya); and even South Africa, the land of the braai and seam-up bowlers, might play three slow bowlers. With Sohail Tanvir and Umar Gul in form, Pakistan are the one team that need not bother about the surface, having bowlers to suit all kinds.

If the tracks are indeed really good, India will be forced to play with five bowlers, which is how it should be anyway. A team that has six quality batsmen and can play Irfan Pathan, R Ashwin and Harbhajan Singh thereafter shouldn't need the security of another batsman at No. 7. If there is a weakness in this team, it is the absence of a death bowler, and the selection of Zaheer Khan, never the most enthusiastic T20 cricketer, is probably an attempt to fill that position.

For the first time in years the team to watch out for is West Indies. I suggested a couple of years ago that T20 might be the path to the revival of West Indies cricket, and they certainly seem to play it with the joie de vivre that the format encourages. A team of Chris Gayle, Dwayne Smith, Darren Bravo (or Lendl Simmons), Samuels, Dwayne Bravo, Kieron Pollard, Denesh Ramdin, Sammy, Andre Russell, Narine and Fidel Edwards (with Ravi Rampaul and Samuel Badree around) offers much for the senses. Gayle will still be the talisman, the enforcer, but there are many match-winners down the line. And almost all of them have played a lot on the subcontinent.

To me, this World Twenty20 will be a search for the joy in West Indies cricket. Anyone can win it but West Indies will bring more smiles to faces.

I watched a bit of the game between England and South Africa during the week and saw the over when one of the English guys belted about 30 including 3 sixes. As a former bowler, it made me very glad that T20 was unheard of when I was playing.

I still prefer a 5-day test to the whiz-bang stuff though.
Cheers

magnificent issues altogether, you just received a new reader.
What could you recommend about your put up that you simply made some days ago?
Any positive?

Feel free to visit my web-site; how much should i weigh