The other day there were celebrations at Scott Base Antarctica for Sir Edmund Hillary who reached the South Pole on that day 55 years ago, becoming the first overland explorer to do so since Captain Robert Falcon Scott's expedition team arrived there in 1912.
They had only one drum of fuel left when they sighted the polar base, which they reached on January 4, 1958, ahead of the main contingent of the British cross-continent expedition they were supporting. 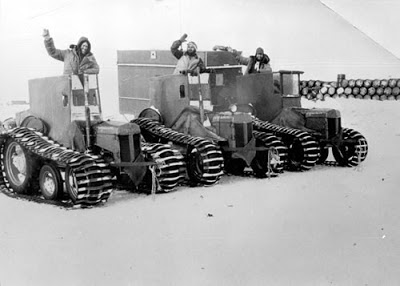 He and the rest of the Commonwealth Trans-Antarctic Expedition (TAE) crew travelled nearly 2000km with converted tractors and sledges.

The photo left was taken on their arrival at the South Pole.
I am so proud I had some correspondence with Sir Ed when I finished the book on Ebenezer Teichelmann, I wrote to Ed Hillary asking if he would write a foreword to the book, as I said he and Teichelmann had something special in common, they were both former Presidents of the New Zealand Alpine Clubs. This is what he wrote: As a young climber I came to respect the climbs and exploration done by Dr. Ebenezer Teichelmann, mainly from the West Coast of New Zealand, up those long and difficult valleys such as the Cook River Valley, and his many first ascent were remarkable in that day and age of hobnail boots and long handled ice axes. His third ascent of Mt. Cook in 1905 was a wonderful achievement.I have seen his photographs gracing many NZ Alpine Journals and other books and I am delighted that hardy band of West Coast mountaineers which included not only Dr. Teichelmann, but Peter and Alec Graham and later, my old climbing partner, Harry Ayres, is getting the recognition they deserve.Both Dr. Teichelmann and I are former Presidents of the NZ Alpine Club and I am pleased the club is supporting this important publication on New Zealand Mountaineering, and capturing a bygone era of courage and tenacity in exploration.

Below is a letter i received from Sir Ed in 1985 agreeing to be Patron of our 1986 North Pole Expedition. 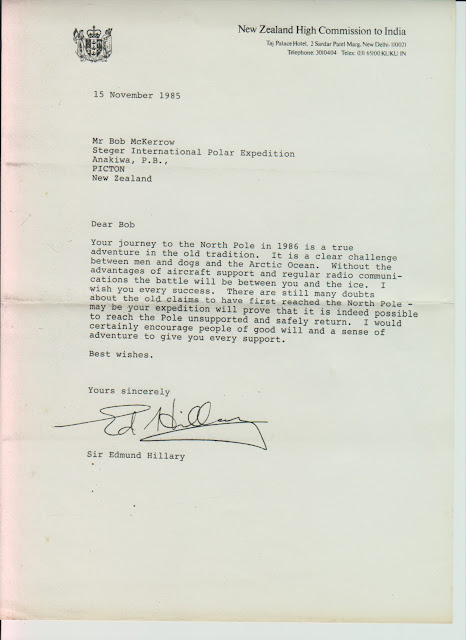