The rockfall of Mt. Dixon yesterday brought back reminders of that day in 1991 when the top fell off Aoraki Mt. Cook when I lived at Franz Josef. As soon as we heard about it, Rusty Knight from the Helicopter Line flew us in to have a look at this stunning geological event. Yesterday's huge rockfall is another of these events that make of realize how brittle and dangerous our New Zealand mountains are.


It is hoped a geologist will visit the scene of a huge rockfall in the Aoraki Mt Cook National Park later today to advise whether it is safe for one of the park's largest mountain huts to reopen.

The 28-bed Plateau Hut was closed yesterday and 15 climbers flown out from it, after a huge rockfall on nearby Mt Dixon early in the afternoon.
The rockfall was three kilometres long and left debris as close as 150 to 200 metres from the hut.
Department of Conservation community relations programme manager at Mt Cook, Shirley Slatter, said geologists from GNS Science had been contacted and had already looked at photos of the rockslide. It was hoped they would be able to fly into the site later today.
"Graham Hancox (a GNS senior engineering geologist) has looked at the footage and does not think there is any danger to the hut,  but we want someone to go in and have a look at it and give us a report."
Two of the guided parties who were at Plateau Hut yesterday opted to fly on to other locations to continue climbing, while others were flown back to the village.
A party of three who were climbing in the area intended to stay at the Bowie Bivy last night before returning to the hut later today.
Plateau Hut is the base for the majority of climbs on Mt Cook and Mt Tasman as well as the other surrounding high peaks.
Once the geologist's report was available, Mrs Slatter said climbers would be advised of any potential risks. 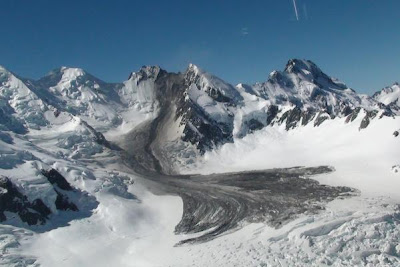 Images reveal the extend of a rockfall on Mt Dixon in Aoraki/Mt Cook National Park on January 21.
MT DIXON ROCKSLIDE SPARES CLIMBERS
A massive rockfall three kilometres long left 15 climbers amazed as they sat in a hut in the Aoraki Mt Cook National Park. The rockfall came off the west face of Mt Dixon about 2.15pm yesterday.
Shirley Slatter, Department of Conservation community relations programme manager at Mt Cook, said there were 12 climbers, including guides, in the hut at the time and a guide she had spoken to was "pretty amazed" by what was happening. A party of three also made its way back to the hut late in the afternoon.
Helicopter company Heliworks put on a flight for DOC staff to check out the slide and the nearby hut yesterday afternoon.
The decision was made to close the hut as debris came to rest within 150 to 200 metres of Plateau Hut. The climbers were flown out from the hut last night, with some choosing to be flown to other huts in the park to continue climbing.
"There is the potential for more to come off. It can happen anywhere in the [Southern] Alps. It is just below the hut, but it has the potential, if more comes off, to overtop where it is and go up a slight rise towards the hut," Mrs Slatter explained.
Mrs Slatter said it was the largest rockslide in the park since the top 10 metres fell off Mt Cook in 1991. She estimated yesterday's slide involved about a quarter of the material displaced in the Mt Cook rockslide.
Footprints from parties which had left Plateau Hut earlier in the day were visible crossing the Grand Plateau before disappearing under the debris.
Further up Mt Dixon, footprints from another climbing party were 20 metres from the debris.
Another three-person party was expected to stay in the Bowie Ridge bivvy last night before climbing the north ridge of Mt Dixon today.
"They will have a wee surprise when they come down tomorrow as they will actually have to cross the debris to get to the hut."
The guides she had spoken to at Plateau Hut were confident the trio would be able to get to the hut but Mrs Slatter said a decision would need to be made as to whether it was safe for them to stay there.

Thanks to the Timaru Herald for permission to run this article.