The Great New Zealand Race is sold. Coast to Coast. 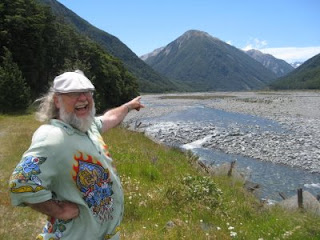 Every time I go back to New Zealand I look up my good friend 'Juddy', Robin Judkins. Above is a photo I took of him in 2009 on a trip to Arthur's Pass. Every time I see Juddy, I ask him " When are you going to sell the Coast to Coast?" Well he finally did it. This was in the New Zealand headlines today.

The longest running multisport event in the world, the Speight's Coast to Coast, has been sold.
The iconic event's colourful founder and race director Robin Judkins, is teaming up with new owner, Queenstown-based Trojan Holdings Limited after 31 years staging the race from Kumara Beach on the West Coast to Sumner in the east.
"Since 1983 I've enjoyed the ultimate challenge and seeing around 20,000 competitors battle themselves, each other and the environment over 243 kilometres from the Tasman Sea to the Pacific Ocean," Judkins said.
"It's a reflection of New Zealand at its finest, just brilliant - it really is New Zealand's great race. But it's time for me to look to a new era with a lesser role."
Each Coast to Coast event has about 3500 people directly involved, generating economic activity and international profile.
"We strive to have a world-class event in harmony with our special environment and wildlife, a passion I will continue to pursue," he said.
"I deeply appreciate the fun and support over 30 years of so many wonderful people - DOC, our managers, volunteers, sponsors, competitors, support crews and local communities.
"I love the event to bits and am really excited about its future.
"I intend to still be there in a supporting role for years to come, at the start to fire them up and at the finish to hand out well deserved cans of Speight's"
The event fits with iconic adventure and tourism-based businesses already operated by Trojan Holdings interests, including the Milford and Routeburn tracks, the Mt Cook Hermitage, AJ Hackett Bungy and NZSki (Coronet Peak, Remarkables, and Mt Hutt ski areas).

I got to know Juddy well in the 1980s when I competed three times in the Coast to Coast. Then John Woods and I decided to write a history of the Coast to Coast, which we called the Great New Zealand Race. It was fun interviewing Juddy on numerous ocassions and as the years passed, we have become very close friends. 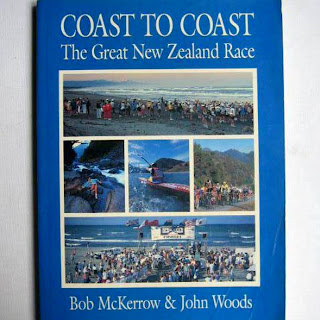 I meet my old friend Juddy every time I go to New Zealand and below are a few extracts from old blog articles. 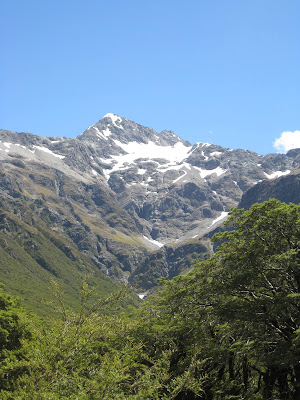 In 2008 my Christmas and New Year present were two spanking, brand new knees that work so well and I feel no pain. The joy of striding across green fields with a strength in my knees is a feeling I have been devoid of for many years, and, to cap it off, no pain.

On Thursday 8 January 2009 I felt I was back to normal seven weeks after the operation as I did totally normal things such as day outings into the mountains and to be in the thick of beech forests in Arthur's Pass.

My good friend Robin Judkins, the creator of New Zealand's famous Coast to Coast endurance event, pulled up in his BMW yesterday, and said, "we are off to do my pre-Coast to Coast checks and PR."  Being the owner of one of the largest, longest-running, and potentiallly dangerous mountain triathlon, Robin Judkins and his team leave no stone unturned when it comes to organisation and safety. With his car stacked with his sponsors products, Speight's beer, we headed off towards Arthur's Pass. 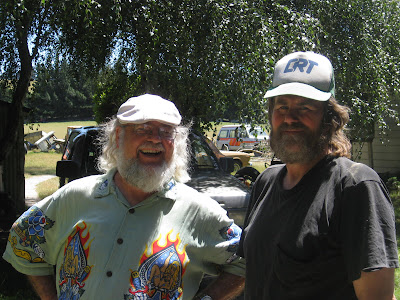 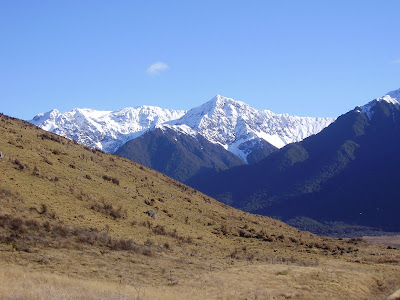 How I enjoyed driving up towards Porter's Pass with temperatures soaring up to 35 oC and the wind blowing in my hair. We visited Castle Hill village and beyond that we struck the view of the high peaks of Arthur's Pass. This is part of the mighty Southern Alps that string almost the length of the South Island.
I always pay a visit to Oscar Coberger ski depot which is now the Wobbly Kea. It is a pilgrimage to a great mountain man who brought the European alpine village concept to New Zealand and was a ski instructor, mountain guide and gear hire depot at Arthur's Pass.  His grand daughter Annelise won a silver medal in slalom skiing in the 1992 winter olympics, the first and only New Zealander to do so. 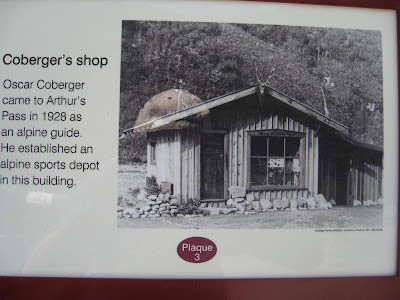 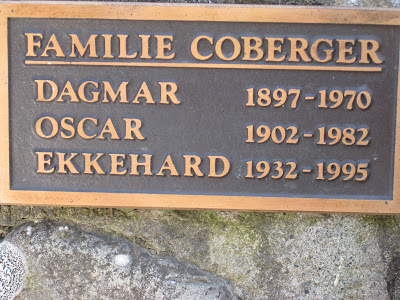 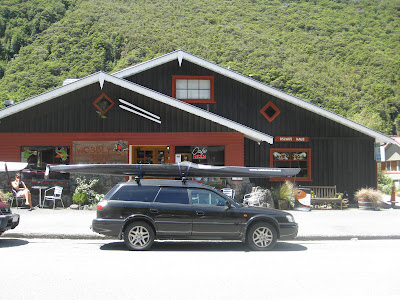 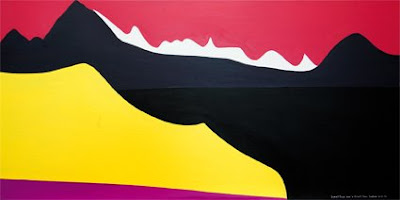 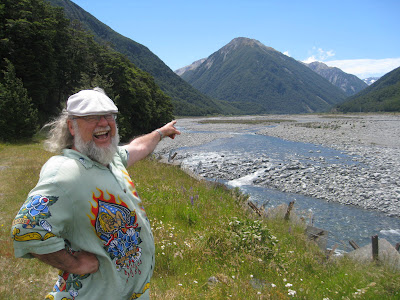 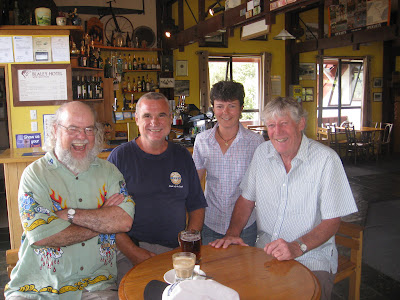 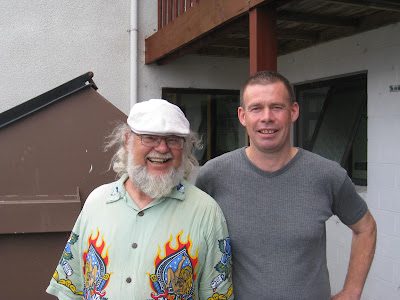 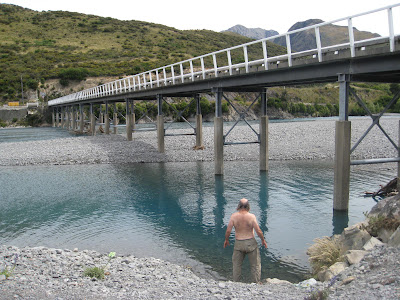 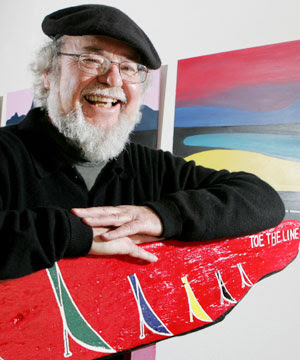 December 2011 Meeting Juddy after the earthquake. 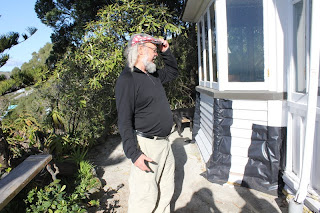 Juddy (Robin Judkin's) shows me the gaps and cracks in his house which sustained much damage during the February earthquake. His hillside section has a faultline running through it and there is an errie feeling of 'what next.'  Juddy has been severely traumatised by the damage and the uncertainty that awaits him, and other Christchurch residents. I walked along the beach with him, and climbed up to his hill-top house and enjoyed a pot of tea and bisciuts. Photo: Bob McKerrow 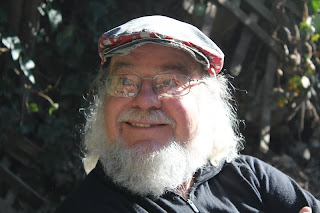 Although having a damaged house, a section that may crumble away in the next quake,  Juddy was able to find some humour. As we walked along Sumner beach  we came to a decapitated Shag Rock, he said " let's try and do the first ascent of Shag Rock," now headless and renamed by Juddy as 'Shag Pile.' So Judkins asked me to join him on the first known ascent of 'Shag Pile," a difficult climb on shattered rock. Juddy led up a steep gulley, almost to the summit, which we reached, almost together. From the top of Shag Pile we could see Ed Cotter's shattered house, pictured below. Bizzare humour for bizzare situations.

Thank you for another informative website. Where else could I am getting that type of
info written in such a perfect approach? I've a project that I am simply now running on, and I have been at the look out for such info.

Look at my web blog: Www.Cloobex.Com

I like the helpful info you provide in your articles.

I will bookmark your blog and test once more right here frequently.
I am reasonably certain I'll be told plenty of new stuff proper right here! Best of luck for the following!

I just could not leave your site prior to suggesting that I actually loved the standard info
an individual supply for your guests? Is going to be again continuously in order to
investigate cross-check new posts

Thank you, I've just been looking for info about this subject for ages and yours is the greatest I have came upon till now. But, what concerning the bottom line? Are you certain about the source?

Hope all is well. Its good that Juddy will still be involved with the race, and it will be interesting to see if the new owners take it in some new directions.

Its sad that since your earlier postings Paddy Freany has passed away, and I also heard a rumour Barry Drummond was retiring.

Hopefully some new characters will start springing up to replace the old.

Heya i am for the first time here. I found this board and I find
It really useful & it helped me out much. I hope to
give something back and help others like you aided me.

Stop by my web-site :: nicotine juice