Coldest Journey ever in Antarctica.

In 1970 I spent the winter in Antarctica and traveled extensively on foot  in various parts of the Wright valley in temperatures below - 50 o C. Here I got to know how difficult and dangerous it is to travel in winter in the Antarctic.
Again in the winter of 1986, we trained on Iqaluit (Baffin Island) for our unsupported dogsled journey to the North Pole.
At the end of February 1986, I met renowned British explorer Sir Ranulph Fiennes at Eureka weather station on Ellesmere Island. We were both heading for the north pole. He was with Dr. Michael Stroud and was planning to manhaul. We were an 8 person team using a 50 huskies pulling sledges.

It was there in Resolute I met Sir Ran and we discussed the dangers of setting off at the end of February/early March when temperatures drop to below minus sixty degree centigrade.  When Ran announced that he was attempting to cross Antarctica in winter I shuddered as I knew using motorized tracked-vehicles would not offer the versatility that dogs offer. Dogs are warm, metal is unforgivably cold.

So spare a thought then for the Coldest Journey team, stuck on the Antarctic plateau in temperatures of about -50C.
The five-man team have had to abandon their attempt to cross Antarctica in midwinter, which would have been a world first.
They had only managed to complete 313km of their near-4000km journey since setting out from Crown Bay in Queen Maud Land three months ago.
They were supposed to reach McMurdo Sound, near Antarctica New Zealand's Scott Base, before the official end of winter on August 19.
The team's leader, British veteran polar explorer Brian Newham, said that after travelling through a difficult mountain range, they had encountered a massive field of crevasses that appeared to stretch a further 100km south.
All their research in the five years leading up to the journey's start indicated the terrain would have been easier in that area.
"It wasn't quite as easy as we thought," he said in an update posted on the expedition website. "Progress has been incredibly slow."
Ground-penetrating radar and foot reconnaissance were used to try to find a safe route through the treacherous area.
Snow was bulldozed into crevasses and bridges were built to slowly winch their heavy vehicles across.
"But now we are in the permanent darkness of winter and the crevassing, if anything, has got worse."
There was a risk the large deep crevasses could swallow their vehicles.
"In my judgment, there is no real choice. I believe it would be reckless and irresponsible to press on and risk the obvious dangers while incurring excessive fuel consumption," Mr Newham said.
The men plan to stay put until warmer temperatures allow them to backtrack to the coast, where they'll be collected by ship.
They plan to spend their time expanding their science and education programmes.
The expedition had travelled the furthest and highest of any expedition in winter months in Antarctica.
Pictures on their website of ice sneaking around window seals into their caboose bedrooms at -50C highlighted the challenging living conditions they faced. 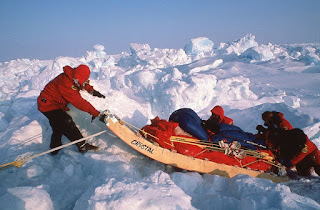 Renowned British explorer Sir Ranulph Fiennes was originally the expedition leader and had planned to ski the entire route.
He had to withdraw after suffering frostbite in two fingers of his left hand prior to the journey's start.
The other team members are British engineer Ian Prickett, British doctor Rob Lambert, Canadian mechanic Spencer Smirl and Irish mechanic/driver Richmond Dykes.
They still hope to raise $12 million for the charity Seeing is Believing, which tackles preventable blindness in developing countries.
Sir Edmund Hillary pioneered Antarctic crossings by tractor, becoming in 1958 the world's first person to reach the South Pole by motorised vehicle. However, his expedition took place in the summer.
Thanks to  Fairfax NZ News for permission to quote friom ntheir article.
Posted by Bob McKerrow - Wayfarer at 06:37