The Hillary Step on Mt. Everest

Employing the skills he had learned in the New Zealand Alps, Hillary jammed his feet, hands and shoulders into a thin crack between a ridge of ice and the rock and, as he put it, “levered myself” up the wall. Then he brought Tenzing up on a tight rope, and together they climbed the final 300 feet to become the first humans to stand on the summit of Mount Everest.
Today, that 40-foot wall is called the Hillary Step. Each May, large numbers of climbers line up to attempt it, causing a lengthy — and dangerous — backup. But this past week, it was reported that the Expedition Operators Association, a Nepali organization that manages teams climbing Everest, has proposed a solution to this final obstacle on the standard route to the top: putting a permanent ladder on the Hillary Step.
Between 1987 and 2009, I went on 11 expeditions to Mount Everest, reaching the top seven times. I’ve climbed both up and down the Hillary Step six times. I think the ladder is a bad idea. It won’t solve the real problem, which is overcrowding on the most famous route in mountaineering. At its best, installing a permanent ladder to surmount the Hillary Step would be like slapping a Band-Aid on an artery that’s hemorrhaging. 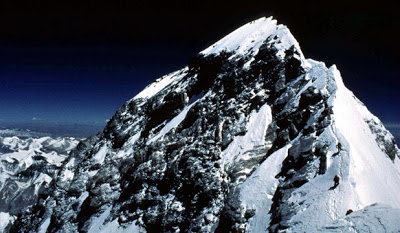 Because guided commercial expeditions on Everest have become so popular, scores or even hundreds of clients go for the top on the same day. Each May, the weather forecast pinpoints the optimal dates for a summit thrust. Most of the teams seize that precious window, as a kind of “group think” takes hold. That is what causes the overcrowding. And now that fixed ropes are strung by Sherpas up every foot of the South Col route, from base camp at 17,000 feet to the summit at 29,035 feet, a perilous traffic jam inevitably forms on the final ridge. Because of their dependence on the fixed ropes, clients can move no faster than the slowest person in the queue. It’s become routine to have to wait two or three hours to tackle the Hillary Step.
Even if a ladder is bolted to the rock on the Hillary Step, it won’t alleviate the bottleneck that inevitably develops there on summit day. Climbers will still clip their ascenders (mechanical devices that grip ropes) to the fixed lines that parallel and safeguard the ladder, and because there’s no alternative to that narrow passage, the two-to-three hour wait will still impose its treacherous delay. For that matter, wearing goggles, down suits and oxygen masks, mountaineers can hardly see their own feet, so climbing down the ladder promises to be every bit as difficult as rappelling the Step on a fixed line.
It’s the traffic jam that causes all the trouble. Climbers run out of bottled oxygen and collapse, or they push upward long after a sensible turnaround deadline and end up descending in the dark, or they succumb to hypothermia and frostbite simply because they’re forced to stand in place for hours, waiting their turn. My fear is that if the ladder is installed, even more climbers will throng to Everest, convinced that a metal contraption has solved all the problems of the South Col route.
A ladder isn’t the answer. Nor can the government of Nepal be expected to regulate how many climbers are on Everest, let alone how many go for the summit on a given day. It will be up to the climbers themselves to coordinate their schedules to avoid overcrowding. This is going to be very hard to do. Personal ambition, a herd mentality and summit fever all too easily overwhelm good judgment.
Aside from these practical concerns, there’s an aesthetic issue at stake. The Hillary Step is a crucial part of the majestic challenge Everest still poses. Just when you think you’ve got the summit in the bag, the mountain throws one last roadblock across your path. It’s the final test you pass to earn the summit.
When I first climbed the Hillary Step in 1991, there was only a short section of tattered rope in place. Unwilling to trust it, I climbed the 40-foot wall without using the rope. Thus I surmounted the Step the same way Hillary had, and it was deeply gratifying to solve its technical difficulties with no aids other than the ice ax in my hand and the crampons on my boots.
The glory of mountain climbing lies in the fact that success is never guaranteed. In recent years, Everest has been degraded by its sheer popularity. Let’s not degrade it further. Let’s leave the Hillary Step as close as we can to what Hillary and Tenzing confronted at 11 a.m. on May 29, 1953.
Thanks to Ed Viesturs for permission to post his brilliant article here.
Ed Viesturs is the only American to have climbed the 14 highest peaks in the world, all without supplemental oxygen. He is co-author, with David Roberts, of the forthcoming book “The Mountain: My Time on Everest.”
Posted by Bob McKerrow - Wayfarer at 09:17

Great weblog here! Additionally your web site rather a lot up fast!
What web host are you the use of? Can I get your associate hyperlink in your host?
I wish my site loaded up as quickly as yours lol

My brother recommended I might like this blog.
He used to be entirely right. This submit actually made
my day. You cann't imagine simply how so much time I had spent for this info! Thank you!

I think a ladder would be too hard for some. I'd actually prefer a lift.