Toni Hagen A pioneer in Nepal

On this blog I try to record the lives of people who have had a huge influence on me through
their approaches to humanitarian aid.
Toni Hagen was one of these giants who died  on April 18, 2003 in Lenzerheide, Switzerland.
I worked for the International Red Cross in Nepal throughout 1975 and came across
many places he had visited, projects he started and many Nepalis who spoke so highly of him. 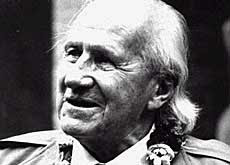 I met him briefly in Bangladesh in January1972 where he was head of the UN relief operation.

Not only did he do a lot to support the people of Nepal, he worked closely with Sir Edmund
Hillary and would often loan him the Swiss Government Pilatus Porter, especially
on the 1960 Silver Hut Expedition. Below is a typical alpine airfield in the Solo Khumbu. 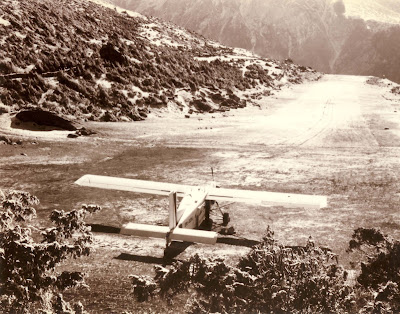 He was widely credited with being responsible for the modern pattern of development aid, which he had pioneered in Nepal under the slogan "wages not handouts", a philosophy set out in his books Paths and Wrong Paths in Foreign Aid (1989) and Building Bridges to the Third World (1992).

Here are excerpts from his obituary in the Telegraph.

Hagen, a Swiss geologist, first set foot on Nepalese soil in 1950 as a member of a Swiss foreign aid mission which had been invited by the government of Nepal at a time when the country was still "forbidden" to outsiders. He was the first foreigner to be granted access to areas which, even today, are not readily accessible.
Starting from the Tarai plains, then still malarial, he crossed Nepal's populated midland region and travelled up to and beyond the Himalayas. At first he was provided with 200 porters carrying everything from portable showers to teapots and bone china dinner services, but progress was so slow, he soon reduced his retinue to a few selected porters and Sherpa Aila, who became his trusty companion.
Later, over nine years, he walked a total of 14,000 miles, enduring everything from icy blizzards to torrential monsoon rains, while carrying out the first geographical and geological surveys of the country for the Nepalese government and for the United Nations. 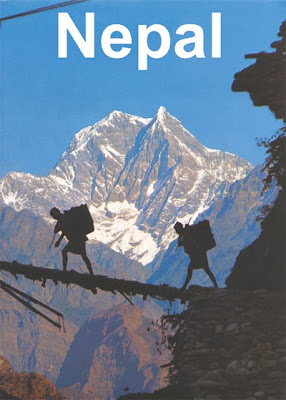 The cover of his best selling book on Nepal.

During this period, Hagen's interest switched from the geology of Nepal to its inhabitants. He was instrumental in persuading the Swiss government to begin humanitarian assistance and development aid, especially for the building of roads and bridges (Nepal is now a major beneficiary of Swiss development aid), and took a particular interest in the plight of Tibetan refugees fleeing the country after the annexation of Tibet by the Chinese.
In co-operation with the Dalai Lama, he developed a concept of self-help and took the lead in setting up camps and establishing carpet-weaving units to provide the refugees with work and an income. After the failure of the Tibetan uprising in 1959, he brought between 1,000 and 1,500 refugees to Switzerland, establishing a colony which now numbers some 2,000.
Hagen's Nepal: The Kingdom in the Himalayas, first published in 1961, revealed the dramatic landscape and the people of a country which, while no longer "forbidden", was still unknown to most of the outside world. The book became a classic and went into several editions, the last of which, lavishly illustrated, was published in 1998.
Later Hagen became an adviser to the UN's Development Programme and, in the 1960s and 1970s, led missions to trouble spots around the world. He was widely credited with being responsible for the modern pattern of development aid, which he had pioneered in Nepal under the slogan "wages not handouts", a philosophy set out in his books Paths and Wrong Paths in Foreign Aid (1989) and Building Bridges to the Third World (1992).
Toni Hagen was born on August 17 1917 in Lucerne. After taking a diploma in engineering and geology from the Swiss Federal Institute of Technology in Zurich, he took a doctorate in the geology of the Welsh mountains, then became a research assistant at the Zurich Geological Institute.
After his first visit to Nepal in 1950-51, Hagen worked as a guest of Mohan Shamser, the last Rana ruler of Nepal, as a government geologist. In 1959 he was appointed director of the Basic Survey Department of Nepal on behalf of the UN, and was involved in carrying out aerial surveys, planning road schemes, building power stations and administering foreign aid plans. In 1961-62 he worked as chief delegate of the International Red Cross, arranging for the aid and resettlement of Tibetan refugees in Nepal and Switzerland.
Hagen left Nepal in 1963 to work as UN representative in Bolivia, advising on the development of the country's oil reserves. From 1966 to 1971, as adviser to the UN's Development Programme, he was given a special mission as "trouble shooter" in crisis-hit areas throughout the world, and travelled widely in Africa, the Middle East and Asia.
From 1969, as Special Representative of the UNDP, he undertook three missions to Peru to manage the emergency relief effort after a series of devastating earthquakes; he was chairman of the UNDP reconstruction programme in North Yemen after the seven-year civil war; and in 1971, he led the relief operations in East Pakistan, remaining in the country after the end of the civil war when it became Bangladesh.
Hagen retired from the UN in 1972 to work as a freelance adviser for organisations involved in foreign aid. Two years later, he returned to the Federal Institute of Technology at Zurich where he lectured on the problems of the developing world.
Travelling remained his passion and Hagen made regular visits to Nepal. In the early 1980s he established the Toni Hagen Foundation to promote democratic reforms and better understanding between different ethnic groups in the country. In 1984, at a ceremony in Kathmandu, King Birendra of Nepal awarded him the Birendra Pragya Alankara, Nepal's highest honour, for his service to Nepal.
Nearly 50 years after his first visit, in 1999, Hagen returned to Nepal accompanied by a film crew in order to return a ring, known as "the Ring of the Buddha," to an old friend, the Buddhist monk Chogye Trichen Rimpoche, the last surviving teacher of the Dalai Lama. Rimpoche had given Hagen the ring 40 years earlier as a token of appreciation for his tireless commitment to the welfare of Tibetan refugees.
A documentary feature film The Ring of the Buddha, recounting Hagen's life's work, is now playing in German and Swiss cinemas.
Hagen died on Good Friday, three days after his wife, Gertrud. He is survived by a son and two daughters.

From Wikipedia, the free encyclopedia
Toni Hagen (August 17, 1917 in Luzern – April 18, 2003 in Lenzerheide) was a Swiss
geologist and a pioneer of Swiss development assistance. After taking a diploma in engineering
and geology from the Swiss Federal Institute of Technology in Zurich, he took a doctorate in the
geology of the Welsh mountains and then became a research assistant at the Zurich Geological Institute.[1] Hagen first visited Nepal in 1950 with a first Swiss development assistance mission.
In 1952 he was employed by the government of Nepal and also worked for the United Nations.
He explored the geography of that Himalayan state.
Dr. Hagen was the first foreigner to trek throughout Nepal during geological and geographic
survey work and mapping on behalf of the United Nations. He clocked over 14,000 km walking
several times across Nepal, where the topography is mostly hilly to snow-covered. He filmed
Nepalese cultural and ethnic diversity originally as produced as a silent documentary, and later
with an English narration in his own voice.[2] Dr. Hagen is also the author of several books
including a book entitled Nepal (ISBN 99933 13 03 3; LCCN 99937099) [3][4]
From 1966 to 1971, as adviser to the UN's Development Program, he was given a special
mission in crisis-hit areas worldwide including Africa, the Middle East and Asia.[5] Hagen was a
pioneer in the field of development aid, undertaking missions to the Himalayas, eastern Africa
and South America in a career spanning over 60 years.[6] After Tibet was taken over by China in
1959, Hagen used his influence to help the Tibetan refugees. During the next years he gained
Dalai Lama's confidence. He managed to bring approximately 1,000–1,500 Tibetans to
Switzerland.[7] Hagen retired from the UN in 1972, worked as a freelance adviser for organisations
involved in foreign aid and later returned to the Federal Institute of Technology at Zurich where he
lectured on the problems of the developing world. In the early 1980s he established the Toni Hagen
Foundation in Switzerland and Nepal to promote democratic reforms and better understanding
between different ethnic groups in Nepal.[8]
In 1999 Dr. Toni Hagen filmed a story of his life, The Ring of the Buddha (German title: Der Ring
des Buddha), which also included some original materials from the 1960s. Soon after the film
was shown, he died in early 2003 at the age of 85 in his home in Lucerne[9] on Good Friday,
three days after his wife,[10] Gertrud in Lenzerheide.