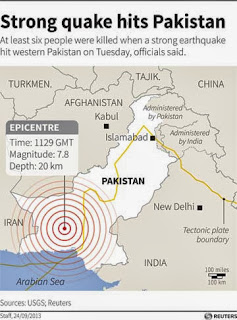 Thousands of Pakistanis ran into the streets praying for their lives late yesterday as a powerful earthquake rocked a remote area in the southwest, killing at least 39 people and possibly creating a small island off the coast.
The Pakistani military said it was rushing troops and helicopters to Baluchistan province's Awaran district, where the quake was centred, and the nearby area of Khuzdar. Local officials said they were sending doctors, food and 1000 tents for people who had nowhere to sleep as strong aftershocks continued to shake the region.
Most of the victims were killed when their houses collapsed, according to the chief spokesman for the country's National Disaster Management Authority, Mirza Kamran Zia, who gave the death toll.
He warned that the toll might rise and said the agency was still trying to get information from the stricken area.
"We all ran out for safety in the open field in front of our house. Many other neighbours were also there. Thank God no one was hurt in our area, but the walls of four or five houses collapsed," said Khair Mohammed Baluch, who lives in the town of Awaran, roughly 50 kilometres (30 miles) south of the epicentre.
Pakistan's chief meteorologist and the US Geological Survey put the magnitude of the quake at 7.7.
Pakistani officials were investigating whether the earthquake was so powerful that it pushed up the earth and formed a new land mass.
Witnesses reported seeing a small island appear off the coast of the port of Gwadar after the quake, said the director general of the Pakistan Meteorological Department, Arif Mahmood.
Gwadar Police Chief Pervez Umrani said people gathered on the beach to see the land mass, which was about 9 metres (30 feet) high and 100 metres (109 yards) long.
Baluchistan is Pakistan's largest province but also the least populated and most impoverished. Awaran district has about 300,000 residents.
Many residents are believed to be involved in smuggling fuel from Iran, while others harvest dates.
The area where the quake struck is at the centre of an insurgency that Baluch separatists have been waging against the Pakistani government for years. The separatists regularly attack Pakistani troops and symbols of the state, such as infrastructure projects.
A Pakistani military official speaking on customary condition of anonymity said security officials were fired on while escorting doctors to Awaran. No one was wounded.
The quake was felt as far as New Delhi, the Indian capital, some 1200 kilometres (about 740 miles) away, but no damage or injuries were immediately reported there.
The quake also jolted Pakistan's largest city, Karachi, roughly 250 kilometres (155 miles) from the epicentre. People in the city's tall office buildings rushed into the streets, and Pakistani television showed lights swaying as the earth shook.
"My table and computer started shaking. I thought I was feeling dizziness but soon realised they were tremors," Karachi resident Mohammad Taimur said. 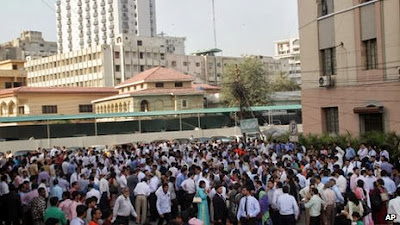 People rushed out of their apartments and offices in Karachi. Photo: AP
In Quetta, the capital of Baluchistan, cellphone vendor Matiullah Khan said he was in his shop with a customer when the cabinet and shelves started to shake.
"I along with customers rushed out to the main street. ... Thousands of people were standing, many in fear and reciting Quranic verses," he said.
Baluchistan and neighbouring Iran are prone to earthquakes. A magnitude-7.8 quake centred just across the border in Iran killed at least 35 people in Pakistan last April.
Balochistan is Pakistan's largest but least populated province.
I worked for Red Cross/ Red Crescent in Pakistan for a number of years and travelled throughout Baluchistan and observed that most of the houses in villages and small towns are made from mud, wooden beams and rocks. Generally after quakes in this area, people can be trapped for some days in the rubble as rescue equipment is limited.
I wish all the rescue and relief workers every success in rescuing people and keeping people alive.