I spent nine months in Nepal in 1975, working with the Nepal Red Cross to build its capacity. One of the areas we identified for training and strengthening, was water safety. People were frequently drowning crossing rivers and streams, and volunteers reluctant to travel to remote district during the monsoon. We looked at ways of developing tradition methods of crossing rivers and I also got an inflatable rubber raft from the Swedish Red Cross as I felt that this was a very safe method of getting 5 or so people across a flooded river.
Looking across the Chobar Gorge early in the morning. The Kathmandu valley under cloud and mist.
I found 2 or 3 young volunteers in the Nepal Red Cross who were strong swimmers and during the first ever national disaster preparedness training course in Kathmandu, we did many sessions on water safety. I remember well that the most outstanding swimmer who adapted well to rafting was Hari Krishna Lovely.

In August 1975, Limbo (Keith) Thompson, the first member of the 1975 New Zealand Jannu expedition arrived and stayed with me to do the initial organisation for the main expedition which arrived a month later. Like me, Limbo had done some rafting in New Zealand. We learned that no one had descended the Chobar gorge, a long and fast flowing section of the Bagmati River. We spent 3 days checking the gorge, the river which is situated just southeast of Chobar village in Nepal, where the Bagmati River cuts through a section of the Chobar hill, the picturesque Chobar Gorge is spanned by a narrow suspension bridge, which was imported from a manufacturer in Aberdeen  in Scotland in 1903. The bridge was transported to Nepal in pieces across the mountains via India and then put together at the Chobar Gorge. This was seen as a huge technical accomplishment at the time and visitors agree that the view of the Chobar Gorge and surroundings from this historic suspension bridge is breath-taking. See photo below. The river was at a very low level when this was taken. 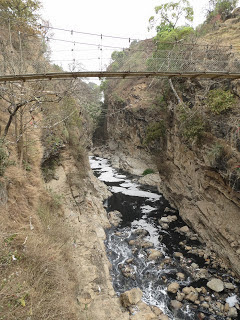 Chobar village is located on a high ridge overlooking the Chobar Gorge and can only be accessed on foot. The rocky cliffs of Chobar Gorge are riddled with caves which are popular as meditation retreats. It is believed by many that an underground passage runs from one of these caves to the Adinath Lokeshwar Temple in the village of Chobar. No-one seems to know where this secret passage begins, however, which adds to the mysterious myths and legends surrounding Chobar Gorge.

We asked many of the local people if anyone had been through the Chobar Gorge by raft or boat, and the response we got was no, but they reminded us that it was a popular place for cremating the dead. The banks of the Bagmati River on the south side of Chobar Gorge has been paved with steps down to the river. These are used for ritual cleansing and cremations in the Bagmati River as well as for the laundering of clothes, and serves as a daily gathering place for the local people.

We learned that geological studies have shown that the Kathmandu Valley was previously a huge lake that drained southward through the Chobar Gorge, opening up the valley. Buddhist legend asserts that the lake, which was known as Nag Hirat (tank of serpents), contained magical snake-like beings that were guarding treasure lying at the bottom of the lake. Bodhisattva Manjushri sliced through the circle of mountains with a single stroke of his Sword of Wisdom, thereby draining the lake and creating the Kathmandu Valley. Countless snakes were said to have been washed out with the departing waters, but the king of the snakes, Kartotak, is believed to have remained behind at the request of Manjushri and now resides in the Taudaha Lake. The Hindu belief, however, is that Krishna created the Chobar Gorge by throwing a thunderbolt that split the mountain. 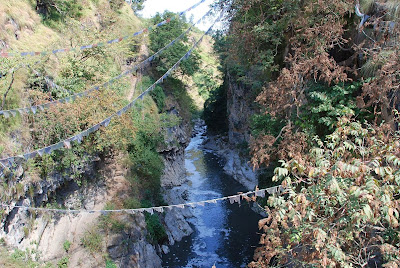 Another view of the Chobar Gorge, Nepal.

At the bottom of the two hills is the three-tiered Bagh Bhairab Temple  with the ferocious deity Bhairab in the form of a Tiger. Alongside, there is a temple to the left of the entrance with Lord Vishnu riding Garuda. The triple – roofed Uma Maheshwor temple can be approached by climbing the stone stairway by the saddle. The main deities in the temple are the standing Shiva and Parvati. From the temple there are excellent views of the surrounding area. The Chilanchu Vihara is on top of the southern hill.

After carefully exploring the gorge from the steep cliffs we decided it would be wise to pick a day when the river was flowing high as we would be less likely to get snagged on various man-made projections that were on the river side.

The day finally came when everything looked good. Limbo and Hari Khrishna Lovely plus 2 Nepal Red Cross volunteers made up a strong team of five. This was real exploration and as leader, I wondered if this was wise to attempt a first descent of an unknown stretch of water. But at 27 years of age, fear is not so well developed, and Hari and Limbo were eager to do it. We gingerly put the raft in at the top of the gorge and paddled in a calm spot to build confidence. Next we slowly paddled towards the start of the river where it picks up speed and we appeared to be sucked downwards into the wild gorge. We had chosen a high water level which covered logs, branches and snags, but had made the river much swifter. We were now totally committed and there was no turning back. We were paddling well as a team and while concentrating on picking the safest course in the swirling river, I had glimpses of people with startled looks on their faces at the top of the gorge and some eagles hovering on the updrafts, and diving into the eddies for fish. We were buffeted by huge waves throwing us against enormous rocks, as we slithered through the gorge. After about 15 to 20 minutes we were spewed out of the gorge and landed right next to the temple river platform. The Priests and Monks were astounded as they thought some supernatural event was happening. Hari explained we were indeed from this realm and had come down the gorge on the river from Kathmandu. Limbo and I recalled being showered with praise and hospitality mixed with a high degree of disbelief as we were told no one had ever been down this gorge in a boat or raft.
A months or so later I did another descent of the Chobar Gorge with Graeme Dingle, a member of the NZ Jannu mountaineering expedition. Somehow it seemed easier, and less exciting but I had time to take in the scenery; very beautiful scenery.