"When the water starts boiling it is foolish to turn off the heat." Nelson Mandela


"When the water starts boiling it is foolish to turn off the heat."
Nelson Mandela 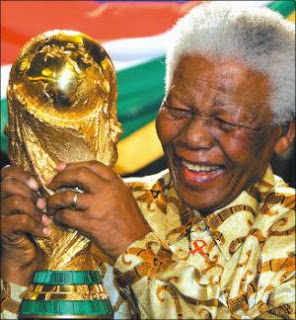 Nelson Mandela, Madiba, was all about positive change. Today the world struggles to change to an earth absent his physical presence. He was of course unique in his capacity to apply increasing heat, to boil very hot water. As a result he cooked a very different, much improved, hugely better world. And he did it in a way that exuded love. The world (eventually) loved him back.

Local, national and international development is all about change, positive change on some really big issues; poverty, health, inclusive and accountable government, rights, the environment and so much more.

Perhaps one way to celebrate the life and achievements of Mandela is for all of us involved in Development to take some time out to reflect on the change principles and strategies that drive our work, be that local action, big funding decisions or any other work along that horizontal continuum.

How do we presently apply "the heat" to each of our priority issues?

Can we find ways to "boil the water" in a quicker and more intensive way?

Millions of us were involved in the anti-apartheid struggle, In my case that ranged from a "foot-soldier" in the protests against the New Zealand - South Africa rugby relationship that provided such succour to the apartheid regime, to being on the Commonwealth Secretariat staff as that organization played a key political role in the trade and sporting boycotts debate and action.

You will all have your own stories.

Those individual stories really matter. The fact that there were millions of people engaged, really matters. Sometimes in development action we seem, almost by design, to take the heat out of situations. People identify issues, organize and seek to effect change. They are noticed.

Then the development professionals (us) arrive, ask for plans, seek impact data, advise structural changes, introduce our knowledge as being most important, assume a representative function and role, dominate the media coverage and use the considerable communication and policy levers at our disposal to highlight (our) perspectives and ideas. The people who were originally "hot" cool off. This does not always happen, but it happens enough to make it a worry.

This was never the case in the successful anti-apartheid struggle. One thing was always clear. We were washing the dishes, not doing the cooking. The cooks were the people in South Africa that we were supporting. As a result, the heat got turned up, not turned down.

Inspired by Mandela and others, we were all attracted to a grand vision based on some universal principles. A fully democratic South Africa. All people are equal. These became every day concerns that were both a unifying force and a touch-stone for analysis and assessment. I can clearly recall for example when the South African Ambassador to NZ, in trying to explain the 'virtues' of "separate and equal development", was "forced" to reveal the huge differences in funding for "white', 'black' and 'coloured' schools. Jaws dropped around the nation. From all perspectives that stunk! And of course we would turn that principle lens to ask difficult, but important issues in our own countries and communities. Such is the nature of a movement, as opposed to a programme.

Somehow, despite the Universal Declaration of Human Rights, the Convention on the Rights of the Child, and other key principles, the international development community seems to have lowered its gaze somewhat. Sure, big principles are rolled out every now and then. But they do not seem to have the every day, at all levels, these are very real, importance, currency and prominence that was so central to the anti-apartheid struggle.

Development has become a more technical operation. We have moved the direction and intensity of our Development heat to pots that contain things like election laws, school curricula, health systems, specific diseases (take your pick), micro-enterprise, vaccine development, infrastructure, land use systems and so on.

These are vitally important. But absent the strong day-to-day presence of the big principles that they are trying to collectively advance, their influence and scale is diminished. The international development modus operandi is, in the main, to move in the opposite direction - towards specific goals, objectives, objectives for each objective, targets, indicators, sub-indicators, tracking spread sheets, time-lines etc - to become more technical.

It is impossible to read what Mandela wrote or listen to him talk without hearing expressions of his key values such as freedom, justice, love, peace, hope, generosity, courage, forgiveness, tolerance, respect, caring, acceptance and compassion. He was against hatred, despair, discrimination and bitterness. This focus on values was absolutely crucial in conditioning the nature of the anti-apartheid struggle and the post-apartheid South African development.

It is a tough and long road to walk in international development at present if your work has a priority focus on values. Effectiveness, impact data, efficiency, technical skill, science all trump values as the central focus for development decision making, Yet, as Nelson Mandela, the anti-apartheid struggle, and other social movements have so clearly demonstrated it is a clear set of values in the central and most prominent position for everyone's actions that are absolutely vital for success. Perhaps we need to recapture that central values focus.

Farewell Nelson Mandela. May you rest in the eternal peace and lasting love that you so richly earned.

Thanks for permission from Drumbeat to run this article.
Posted by Bob McKerrow - Wayfarer at 22:18

Good one, Bob! Thanks. JL