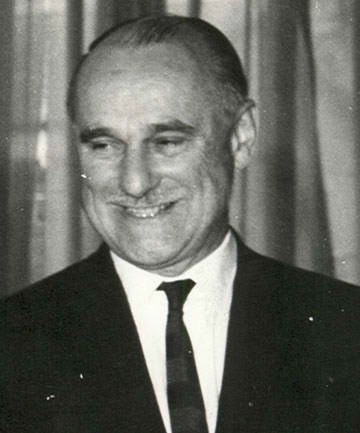 Forty years after he was acquitted of spying, electrifying new evidence has emerged showing that top government official Bill Sutch was a KGB recruit working under the codename "Maori".
The Dominion Post has obtained copies of official KGB records that show Sutch was a 24-year veteran recruit of the feared Soviet spy agency when he was arrested while meeting a KGB agent at an Aro Valley park, in Wellington, in 1974.

But his daughter says the evidence does not match her father and maintains he was not involved with the Soviets.
Sutch was acquitted of a charge obtaining information helpful to the enemy, following a sensational five-day trial.

ON THE RUN: Dimitri Razgovorov, a KGB officer, sprints down Aro St in Wellington when he realises Sutch has been arrested.

SPY GUY: Former SIS agent Kit Bennetts, about the time of the raid.


Forty years later, the records provide the KGB's answer to the enduring question from New Zealand's greatest spy scandal: Was Sutch, a brilliant and senior bureaucrat who influenced several prime ministers, a Soviet spy?
Smuggled out of Russia by a KGB defector, the papers also provide coded details of other Kiwis the KGB recruited during the Cold War.
They even reveal the KGB's New Zealand budget, showing that the year Sutch was arrested, their safe held a surplus $2504.64.
The documents don't name Sutch but the details clearly identify him and state he was recruited in 1950.
Given the codename "Maori", the records say Sutch was in contact with a KGB agent, Drozhzhin.
The former SIS agent who caught Sutch in a clandestine meeting with KGB agent Dmitri Razgovorov in Holloway Rd, said the documents vindicated SIS attention on Sutch.
"I'm delighted . . . not because I want to stick it to Bill Sutch, but because I always knew it to be true," former agent Kit Bennetts said. "It is important we don't run from our history, no matter how uncomfortable it might be."
It was regrettable Sutch refused to co-operate when confronted with evidence of his previous meetings with the KGB agent, Bennetts said.
"What we really wanted to know was what he'd done in the past. There was no desire to send him to prison. If he'd co-operated he would have got his knighthood and no-one would be any the wiser."

Sutch's daughter, Helen Sutch, said last night she did not agree that the files showed her father was a KGB recruit for 24 years before his arrest and acquittal.
"The idea is absurd. My father was a true New Zealander and his life was dedicated to New Zealand's interests as his whole career and his personal life and his books and lectures show," she said.
"My father was charged on the basis of a few meetings at the end of his life, long after his retirement, not on anything he had done in his career and even then the charges wouldn't stick."
The KGB files did not surprise her.
"It is well known that KGB agents in general were desperate to talk up any contacts they had because they were under pressure from their superiors," she said.
The new evidence comes from papers copied by former top KGB archivist Vasili Mitrokhin, who defected in 1992.
The papers have just been made public by Churchill College at Cambridge University in Britain. Only a few pages of the Mitrokhin records are devoted to New Zealand.
The file with New Zealand material in it says the KGB recruited an "ex-high ranking official in state machinery" who was born in 1907, obtained a PhD and retired in 1965.
That profile is a perfect match to Sutch who was born in June 1907, held a PhD and retired as the head of the Department of Industries and Commerce in 1965.
The KGB thumbnail sketch says the agent was "recruited in 1950," given the codename Maori and was "in contact with Drozhzhin".
Sutch therefore appears to have been recruited in New York as he was secretary-general of New Zealand's United Nations delegation there from 1947 to 1951.
Bennetts said Drozhzhin was a "seriously good KGB agent".
"He was so good he taught me my trade. When the new guy [Razgovorov] came along we'd got really good at what we were doing . . . we didn't set out to catch Sutch . . . they [KGB] led us to him."
Bennetts said even in the face of the new evidence some people will refuse to believe Sutch was a Soviet recruit.
Doubters should ask why the KGB were still meeting Sutch, he said.
"Why would they stuff around with someone for 25 years if he was no use to them?"

Thanks to the The Dominion Post for permission to run this article.