Four tips on how to win a Rugby World Cup

History shows there are many pitfalls to avoid.

Between now and September, when the Rugby World Cup starts in England there will be some high levels of anxiety, second guessing and general twitchiness over the All Blacks' chances.
For the past six months I've been interviewing, researching, and raking through the coals of my own memory, as a journalist at every cup, for a new book.
Talking now with people such as Taine Randell, Reuben Thorne, and Andrew Mehrtens, and scouring interviews and books I worked on at the time with coaches Laurie Mains, Alex Wyllie, and Brian Lochore, hordes of players, team managers, doctors and fitness experts, patterns of success and failure clearly emerge.
What are the mistakes to be avoided?
1: Complacency
Contrary to general wisdom, while the twin coaching of Wyllie and John Hart in 1991 was as confusing to the players as it seemed to outsiders, just as big a problem was a belief in a hugely talented core group from 1987 that they didn't need to work that hard to win again in '91.
In the words of Zinzan Brooke, "The players were so far up themselves they thought winning the Cup was no more than they deserved and that it would happen as a matter of right."
2: Not switching tactics on the hoof.
Contrary to the anti-Laurie Mains camp, led in this country by Keith Quinn, the majority of the players who went into the final in 1995 against South Africa had genuinely been smitten with food poisoning on the Thursday night/Friday morning before the Saturday afternoon final.
There's no doubt the legacy of the illnesses played a part in the loss, but the All Blacks also didn't change the way they were playing, which largely consisted of doing everything at high speed, and getting the ball wide, in particular to Jonah Lomu's wing.

In the final, a senior player in the team, Mike Brewer, says, "They played an outside-in defence, looking at pincering Jonah so he couldn't beat his man, James Small, on the outside. They put Small on his outside, and with their centre moving on Jonah from the inside they shut him down really well." Faced with a team who had worked out a way to stop them, the All Blacks of '95 didn't switch to another plan.
In 2007 the All Blacks in Cardiff stuck to hopefully smashing their way over the line, aiming through pressure to get a try, or, at least, a kickable penalty. With a referee in Wayne Barnes who had stopped awarding penalties it was never going to succeed. They didn't change their approach. 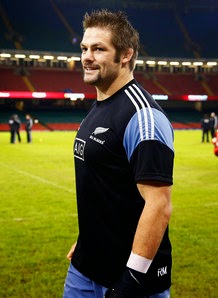 What works?
1: Goal kicking
Ask Beaver Donald and the 2011 team about that. Playing a knockout game without a reliable goalkicker is not so much taking a knife to a gunfight as hoping a sad look will make a gunman put down his weapon.
2: Experience, experience, and a bit more experience.
The romantic notion is that the '87 team was stacked with Baby Blacks, a new wave that swept through the ranks infusing the squad with enthusiasm and raw talent.
In fact the starting side for the '87 final had eight Cavaliers (from the rebel tour of '86 to South Africa), and just two players, Joe Stanley and Sean Fitzpatrick, who made their All Black debuts as Baby Blacks. There was nothing another team could throw at people like Grant Fox, Buck Shelford and Gary Whetton that they hadn't seen before.
On the other hand, as a prime example of what happens when you don't have a powerful core of veterans, look at 1999. When the French start to come back in the semifinal, Taine Randell, well-liked, a talented player, but at only 24 and a virtual newcomer to the leadership role, struggles.
Christian Cullen says, "If ever there was a time when we needed Fitzy (Sean Fitzpatrick) back it was now. He was the sort of bloke who would have said. 'Listen, this is what we are going to ****ing do.' But we didn't have that type of leadership any more. It's too easy to blame Taine (Randell). Some senior guys didn't back him. That wasn't his fault. So instead of having one clear and decisive voice we had Taine, Robin (Brooke), Dowdy (Craig Dowd), and Goldie (Jeff Wilson) all having their say."

Between now and the 2015 cup you can guarantee the spectre of some of the All Blacks being over the hill will be raised. History shows it's better to have guys starting to head down the other side than players who have never been up the hill at all.