Tomorrow 22 February 2015,  it will be four year since the devastating Canterbury earthquake hit Christchurch and surrounding towns and countryside. One of my best friends Brian Taylor was killed that day when the CTV building collapsed. On the first anniversary I got an message from my daughter in Christchurch saying " tomorrow evening I am catching up with Brian's running crew. We are doing a twilight run followed by desert on the port hills. Thinking of you and Brian's loved ones. Love Aroha

Brian was a reknowned New Zealand athletics coach and trained many athletes, including myself as a teenager, and 35 years later, my daughter Aroha. 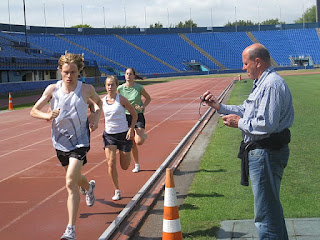 I often mull over the fact that Brian should have been with me in Sri Lanka on 22 February 2011 working with Colonel Madugalle, Vice President of the Sri Lanka Amateur Athletics Association. We had been planning to bring Brian over to train Sri Lankan athletic coaches in preparation for the next Coimmonwealth Games to be held in Sri Lanka. Brian was really excited about this visit and so was I. I had spoken to my boys about Brian being able to analyze their running style and coach them a little. 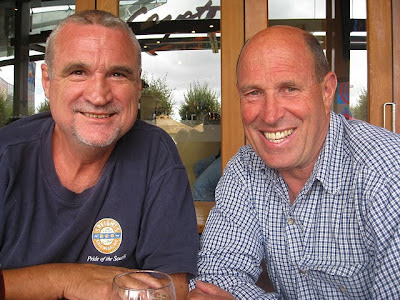 Brian Taylor, right, with Bob McKerrow. Good to see the Speight's beer label there as we were one of their greatest customers in our younger day.

This is what I wrote shortly after Brian was assumed trapped in the building, but not declared dead..

"Tonight the little light blue box beside Brian's name on SKYPE has a cross beside it and strangely, for the last few mornings, I have missed seeing brianwtaylor pop up on screen showing me he is on SKYPE. I never bothered enquiring about him because 'Tails' was invincible and indestructable, or at least, that's what I thought.

Here is the SKYPE message Brian sent me on 31 December last year.

[31-Dec-10 10:38:13] Brianwtaylor: Hi Bob, Happy new year to you too. I can work on a date for the middle of Feb. I will try and check flights as well. We go camping on Jan 4 for 2 weeks. I will try to get flights sorted either while I am away or before I leave on the 4th. I will not have easy computer access, but cell texting is good, if you can send me your cell phone number. Brian

Sadly, we had to postpone his visit until March as the mid- February dates clashed with the Cricket World Cup being held in Sri Lanka and neighbouring countries. We should have stuck to that 10 day period starting 15 February 2011.

I will keep looking every day on SKYPE, hoping for the miracle, for the cross to change to a tick. Usually we chatted a few times a week, about his pending trip, and what we were up to in our lives. Often it was a quick "good morning, how are you."

Brian and Prue invited me to their home on New Year's eve 2008-09 and a few days later in January 2009 I spent time with Brian at QE II Park , where the 1974 Commonwealth Games were held, watching him coach his athletic squad. I wrote at the time: "

It was a joy to meet again with my former athletics coach, Brian Taylor, who lives in Christchurch and coaches some of New Zealand's leading athletes. Brian coached me from the age of 14 to 20, and as a group, including James Williamson, we did some revoluntionary training, an expanded version of Arthur Lydiard's methods. In those days we ran more than 130 miles a week with often a 26 mile run over the hills of Dunedin on a Sunday. Unknowingly at the time, this endurance conditioning prepared me for exploration in later life and I owe a lot to Brian. Forty-seven years after he started coaching, Brian Taylor is still putting in hundred of voluntary hours a month coaching young people. It is role models like this that produce great sportspeople in New Zealand. They are New Zealand's unsung heroes.

On the fourth anniversary of the destructive quake, my heart goes out to all those who lost relatives and friends. And the grieving goes on.....
Posted by Bob McKerrow - Wayfarer at 18:47