Cricketers and Cameleers from Afghanistan in Australia

I first traveled to fabled Afghanistan in 1976 when I journeyed through  that peaceful country for 6 months working for the Red Cross  on an earthquake and then a flood operation at a time when it was such a peaceful country. Then I lived there for 3 years from 1993-96, during a period of anarchy and bloodshed. This was the time the Taliban were born and came to power. The Taliban’s never liked sport, but eventually agreed that cricket was an acceptable game. Then from 2000 to 2006, I visited Afghanistan on a regular basis and saw cricket becoming an important game in the country.  I read this article yesterday written by Christian Ryan in a bar in Melbourne, about Afghanistan cricket and Afghan cameleers. An interesting story.


The bar is the Cricketers Bar. It faces out street-side from the cricket-famous Hotel Windsor. Many cricketers have stayed here. Nearly every famous cricketer of international cricket's first hundred hard-drinking years drank here. But this World Cup, six nights out of seven, only one of the bar's two TVs is switched to the cricket.
Framed team photos hang from the walls. What if they had seeing eyes, the people in these photos of cricket teams of legend - the 1868 Aboriginal team, no less? If they did, then Tarpot and Dick-a-Dick and King Cole, say, apart from seeing themselves identified by the pet names bestowed on them in the caption underneath, would have to suck up the added annoyance of staring, every night of the week bar one, at flickering re-screenings of days-old rugby matches.
The night before last, both TVs had the cricket on. Australia were playing. Never likely to be a pulsating night's cricket, it was a good night for pulse-taking. They were playing Afghanistan, a team which wasn't a team from a place where cricket wasn't seriously a thing 15 years ago. Watching Australia play, there's a community vibe normally. This night, the community had a rip in it.
Some were unaware who or even that Australia were playing. Others were feeling a tingling in pressure points that hadn't tingled for an ODI this century. Rarely since the distant decades of last century - Frank Worrell's 1960-61 West Indians and their summer-long carnival of wow - would so many Australians have minded so little if their team lost. Adding to the frisson was knowing how much the night's proceedings mattered to everyone monitoring them from faraway Kabul. Piling frisson on frisson was the start time: 2.30pm in Perth, meaning a 5.30 start and scheduled 1.30am finish on the east coast, the timeslot, minus an hour, of a UK Ashes Test, a meeting between Australia and their oldest rivals, except tonight they were playing a team with whom they shared no history and exchanged precisely zero rivalry.
For some, this had an almost painful poignancy, while for others a frisson-free autumn evening of sorely needed Australian batting practice stretched ahead. Channel Nine, having pledged to show all Australia's matches, flicked this one last-minute to one of its subsidiary channels.
In the bar, 50 blokes and four women drank, backs turned to the TVs, apart from two guys in suits, their cufflinked right hands alternating between clutching the clammy upper crest of their $3 pots and stroking their chins, rapt. When Finch was caught at slip in the third over, a few other heads looked. Then Warner took 11 runs off the eighth over, Hamid Hassan's first, and the match's allure as a win-loss spectacle was gone. 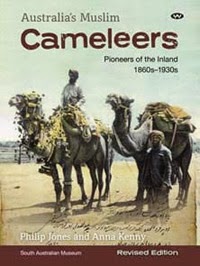 Leaving that bar, stepping out into Melbourne air, the night was crisp, still, abnormally windless.
In Kabul the forecast said it was raining, freezing, snowing.
Zero rivalry - in a cricketing sense, I'm meaning.
In the 1860s Afghan cameleers began coming out to Australia. Camels could cross gibber plains and go deep into Australia's still-mysterious interior, places where horses got thirsty or spooked. In the "ghantowns", where the cameleers lived, there were accounts of Afghans boxing, wrestling, racing camels, weightlifting, playing cards, two-up and marbles, smoking hashish out of pipes, riding bicycles, and making music out of bamboo flutes, tin whistles and three-stringed rubabs. No cricket, not that I've read. Sometimes there was a feeling that surely Australians could drive camels, who needed Afghans? 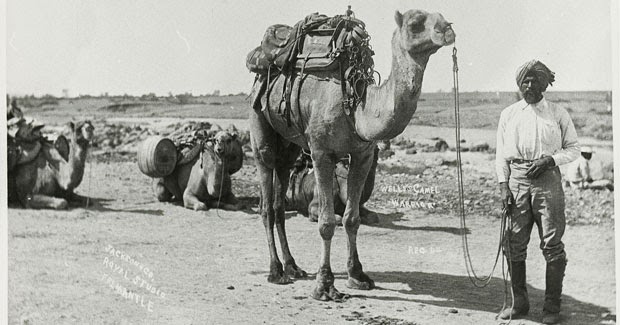 The writer Azhar Abidi went a few years ago to the old ghantown at Marree, where he met 94-year-old Aysha, who said the railway track separated Marree's blacks from whites. "Whites lived on the west side, blacks on the east," Abidi reported. "The Europeans used to smear the turnpikes with pigs' fat to stop the cameleers entering their half of town."
Australia smashed the Afghan bowlers, 417 they made. There was sadness and a hollowed-out empty feeling about this but also, again, a rip, a gap. Celebratory was the mood in the commentary box, where near-salivating and actual chortling - such as when Maxwell produced a stand-up reverse sweep off a 107kph yorker - broke out. Hassan's triumphant two-over final spell, going for four runs in the 47th over, and six in the 49th, got lost. The gap - cricket fans on one side, Australia fans on the other - felt wide.


It's natural that cricket's obsessives should relish the sparkle of Afghanistan's play this World Cup. The obsessive watches so much cricket, because so much cricket is on TV to watch, that the homogenised techniques of all those helmeted anonymees starts to grate. Afghanistan's players play in an unstraightened-out sort of way. Non-homogenous techniques and, just as refreshing, non-homogeneric personalities, like Javed Ahmadi's, who admitted - how many major-nation Test openers would admit this? - to trepidation at batting on the bouncy WACA. "I think Australia," Ahmadi said, "has good batting wickets. WACA is totally different. So I'm not happy to play here."
Afghanistan's batting was willing but, no surprise, not up to chasing 417. Over in the commentary box, here's Shane Warne, three interpretations of events within 15 minutes, worth quoting verbatim in all their awesomely well-meaning condescension.

WARNE (28.4 overs): "Plenty of good signs for Australia. I tell you what, though, I've been impressed by Afghanistan too, BJ. It's great to see them smiling." WARNE (30.2 overs - a 98-metre on-drive by Najibullah): "Whoa. Straight out of the screws. He likes it too. Look." (So I looked - and Najibullah looked steadfastly impassive.)
WARNE (32.2 overs): "Just to finish the point on Afghanistan and the Associate nations, BJ. I think it's been fantastic… Just because they don't perform that well, they can hold their heads up high from the way they've gone about it. They've been smiling."

As Russell Jackson, live-blogging the game, pointed out, "What's been notable… is the way they haven't smiled. They're genuine competitors. Najibullah and Zazai know they have no hope here and it looks like they're annoyed by that, not resigned to it."
In Marree, Azhar Abidi met an old man, Jabbar, son of one of the last cameleers. Have you only ever spoken English, Abidi asked him. Yes. He did not understand his ancestral language. He could not speak it - although, actually, there was one time, in a hospital ward, in extreme pain, when he was informed afterwards that he'd been babbling something. In Pashto. "Somewhere," said Jabbar, "deep inside my head I must know it."
As with the lost ancestral language of Jabbar's homeland, so it is with Afghanistan and cricket. It is in them.

Christian Ryan is a writer based in Melbourne. He is the author of Golden Boy and Australia: Story of a Cricket Country. His new book is Rock Country
© ESPN Sports Media Ltd.
Posted by Bob McKerrow - Wayfarer at 15:35

Great work and it is very helpfull info. you can also View Afghanistan Cricket Upcoming Series 2017-18 Check Out Here at at http://cricket.upcomingwiki.com/cricket-schedules-fixtures/afghanistan-cricket-team-upcoming-matches.html