I have just read Ashes, Wine and Dust by KANZA JAVED from Lahore, Pakistan - a distinct and sure voice- that promises to bring change in the world of new Literary writing.
Kanza  lives and writes in Lahore. Her manuscript, shortlisted for the Tibor Jones South Asia Prize for literature, brings her world to rise from the ashes and settling into dust. Her debut work ‘Ashes, Wine and Dust’ was shortlisted for the prestigious Prize in 2013, making Kanza, at the age of twenty-one, the youngest and the only Pakistani writer nominated for the prize that year. 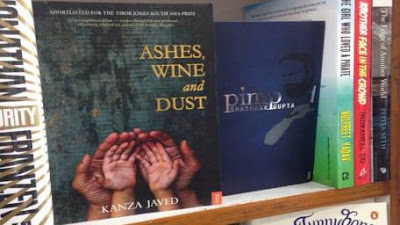 She was a keynote speaker in the ‘Aspiring Writers’ panel at the Lahore Literary Festival 2013. Her narrative, ‘Passing Morning’ won third prize in British Council’s ‘Charles Dickens Writing Competition.’ Her short story, ‘The Intruders’ was published in Earthen Lamp Journal (March, 2014). Kanza is currently teaching Literature at Kinnaird Women’s College, Pakistan.  Her debut novel, ‘Ashes, Wine and Dust’, is being published by Tara Press, and will release this fall 2015).
Ashes, Wine and Dust …… embroiled in the set imperative of middle-class life in contemporary Pakistan, Mariam Ameen decides to challenge the tradition of being female !!  Beginning in Lahore, the novel enters its first phase with Mariam struggling to retain the memories of her dead grandfather so engrained within her. With willful and determined self-assurance, she leaves for America in search of better days, carrying these memories with her. But encounters with strangers in an unfamiliar land leave Mariam confused and vulnerable. In the midst of forging new paths, she learns of the disappearance of her younger brother, Abdullah, in America.
A reverse journeying then begins as she travels backwards to her roots to confront what she once left behind, in order to find the answers she is looking for. Against the backdrop of unyielding social institutions threatened by change and independent individuals, Mariam vows that she will not stop looking for her brother.
Ashes, Wine and Dust describes a young woman’s exploration of self-identity through the invisible ropes of social customs, stereotypes and love. As love in all forms is tested in the most strenuous of ways, disappearance in turn, becomes the less chosen road towards a self-discovery.

A rejected visa didn't deter Pakistani author Kanza Javed from launching her book ‘Ashes, Wine and Dust,' in India. The Pakistani author who was supposed to participate in the Kumaon Lit Fest, said her visa was denied at the last-minute. Rather than mope, she took her publisher, Aanchal Malhotras help, and co-ordinated a launch over Skype according to a Times of India report. This what the Times of India wrote.akistani novelist Kanza Javed, denied a visa to take part in the Kumaon Lit Fest, launched her novel `Ashes, Wine and Dust' over Skype from her home in Lahore.
Aanchal Malhotra of Tara-India Research, the publisher of the book, was also the per son to release it. Javed had been shortlisted for the Tibor Jones South Asia Prize for her novel. In the Skype conversation, the 24-year-old author briefly outlined the plot of her book - the story of a young girl, with the three sections in the novel corresponding to the three words that comprise the title.The protagonist, Mariam, in her negotiation with adults including her grandparents, is a silent observer stumbling on secrets in the family that leave behind deep scars. As she grows, she also travels from Lahore to Washington. The displacement that goes into her education is the subject of the two latter parts of the novel. Of her experience of being shortlisted for a major award although she was so young, Javed spoke about being overwhelmed. "No one in my family had been a writer.I had no friends who were writers either," she said. On a philosophical note, she added that not winning the award was enriching for her since "I was forced to take on board the rather dense criticism of the judges." The book is available at:
https://www.google.co.in/webhp?sourceid=chrome-instant&ion=1&espv=2&ie=UTF-8#q=kanza%20javed