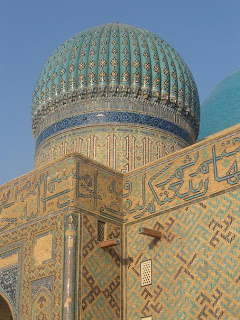 Turkestan here we come
I am currently reading everything I can on Turkestan in preparation for my visit later next week. I am reading about the City and in particular, the Mausoleum of Khoja Ahmed Yasavi. The mosque. which is situated in the city of Turkestan became the first Kazakh patrimony to be recognised by UNESCO as a World Heritage site.It was commissioned in 1389 by Tamerlane or Timur the Lame. It replaced a smaller 12th Century Mosque built in honour of a great Sufi Master, Khoja Ahmed Yasavi (1103-06).The building was left unfinished when Timur died in 1405. It is one of the best preserved Timurid constructions. One of the most famous leaders of the old Kazakh Khanate was buried here and his tomb is something I look forward to visiting. My boy Ablai is named after Ablai Khan.
I have studied the splendid Timurud architecture in Herat, Samarkand, Bukhara and now onto Turkestan next week.
But where did this man Timur come from ? The empire of the Mongols became increasingly fragmented in the 14th century. One section, called the Chagatai khanate, included the area northeast of modern Iran, parts of Central Asia and northwest of modern India. This included the cities of Bukhara, Samarkand and Turkestan. It was here that Timur emerged as a leader and conqueror.
Between 1380 and his death in 1405 Timur's conquests included Iran, Iraq, Syria, Georgia, and parts of Anatolia, Central Asia, Afghanistan and India. At one point he occupied Moscow and he was beginning a campaign against China when he died. His capital was located first in Kish and later in Samarkand, north of the Oxus river. After his death, his empire was divided between his sons and grandsons, thus establishing the Timurid dynasty. His youngest son, Shahrukh (Shah Rukh) eventually reunited the kingdom, which was again divided between his sons Ulughbeg and Ibrahim Sultan.
"The Timurid period marks the apogee of colour in architecture, both in sheer technical expertise and in the astonishing variety of designs and textures(Hillenbrand, 1999, p. 216-217)
Posted by Bob McKerrow - Wayfarer at 22:19

boring! how about a poem on rugby

Way cool! Some extremely valid points! I appreciate you writing
this write-up and also the rest of the site is really good.

Way cool! Some extremely valid points! I appreciate you
writing this write-up and also the rest of the site is really good.