A new perspective on climate change and flooding 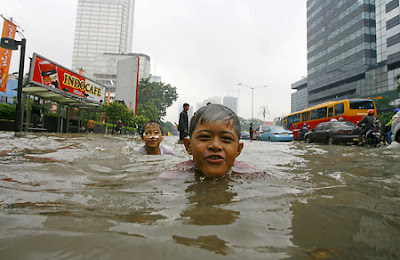 People swim to survive the Jakarta floods in February 2007
I was fascinated by this article I found this morning as I have been working with flood preparedness and relief for around 30 years in Asia. Each year it seems to get worse. In February this year I was quite involved in the flood relief operation in Jakarta. This time my family was affected too. Our house is in a flood-prone area called Bangka. On the first day of the floods it took me almost 4 hours to get to work. We were without water and electricity for 8 days and I felt could identify with the affected people more than normal. This article helps to explain why the flooding is getting worse year by year.
Climate flooding risk 'misjudged
Climate change may carry a higher risk of flooding than was previously thought, the journal Nature reports.
Researchers say efforts to calculate flooding risk from climate change do not take into account the effect carbon dioxide (CO2) has on vegetation.
Higher atmospheric levels of this greenhouse gas reduce the ability of plants to suck water out of the ground and "breathe" out the excess.
Plants expel excess water through tiny pores, or stomata, in their leaves.
Their reduced ability to release water back into the atmosphere will result in the ground becoming saturated.
Areas with higher predicted rainfall have a greater risk of flooding. But this effect also reduces the severity of droughts.
The findings suggest computer models of future climate change may need to be revised in order to plan for coming decades.
Soil saturation
Plants perform two functions that are of key importance in climate change.
They absorb CO2 from the atmosphere and convert it to oxygen as a by-product of their energy generation process.
Plants also absorb water through their roots, and release it back into the atmosphere through their stomata.
CO2 enters plants through the stomata; water evaporates through the same holes.
The higher the level of atmospheric CO2, the more the pores tighten up or open for short periods.
As a result, less water passes through the plant and into the air in the form of evaporation. In turn, this means that more water stays on the land, eventually running off into rivers when the soil becomes saturated.
A team led by Dr Richard Betts from the Met Office has modelled how this will affect climate change predictions.
"It's a double-edged sword," said Dr Betts, "it means that increases in drought due to climate change could be less severe as plants lose less water.
"On the other hand, if the land is saturated more often, you might expect that intense rainfall events are more likely to cause flooding."
Posted by Bob McKerrow - Wayfarer at 15:37

Email ThisBlogThis!Share to TwitterShare to FacebookShare to Pinterest
Labels: floods and climate change

each time i used to read smaller content that as well clear their motive,
and that is also happening with this post which I am reading now.

I relish, cause I discovered just what I used to be having a look for.
You have ended my 4 day lengthy hunt! God Bless you man.
Have a nice day. Bye

my page; making money from home